A Hazy Day in Mexico City 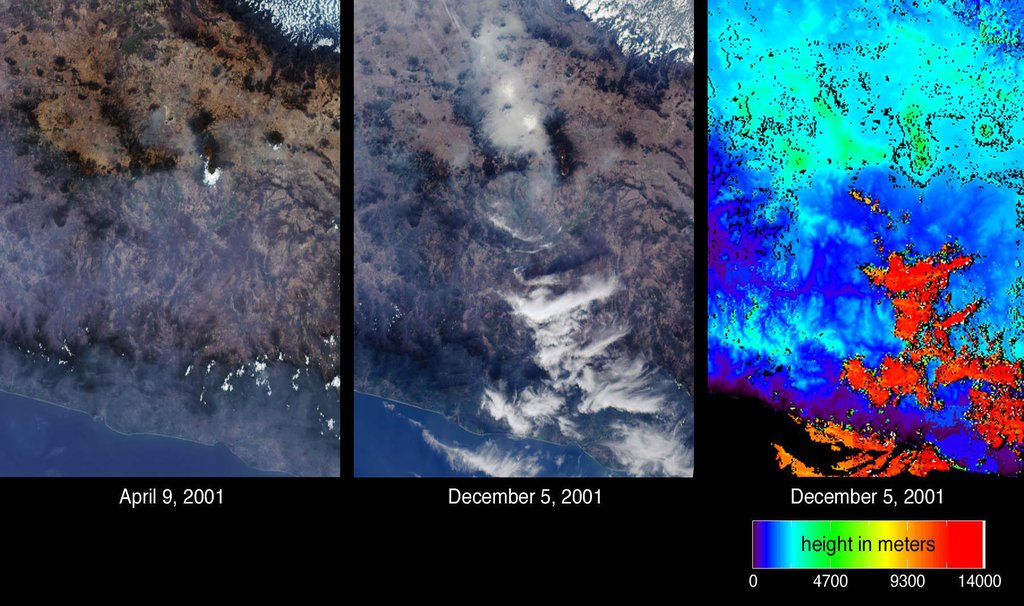 Mexico City has one of the world's most serious air pollution problems. The city is located atop a high plain at an altitude of 2200 meters, and is surrounded on three sides by mountains and snow-capped volcanoes. Since incident solar radiation does not vary significantly with season at tropical latitudes, photochemical smog is produced much of the year. In winter, air quality can worsen significantly when thermal inversions keep polluted air masses close to the surface.

Atmospheric particulates (aerosols) are readily visible at oblique view angles, and differences in aerosol amount on two days are indicated by these images of central Mexico from the Multi-angle Imaging SpectroRadiometer (MISR). The images at left and center are natural color views acquired by MISR's 70-degree forward-viewing camera on April 9 and December 5, 2001, respectively. Mexico City can be identified in the center panel by the large area of haze accumulation above image center. Two small brighter patches within the hazy area indicate low fog. In the left-hand panel, the city basin appears significantly clearer, but some haze remains apparent across the Sierra Madre mountains in the lower portion of the images. On the right is an elevation field corresponding to the December 5 view. Automated MISR stereoscopic retrievals reveal the clouds at lower right to be at very high altitudes, in contrast to the low-lying haze and fog near Mexico City. When the stereo retrieval determines that a location is not covered by clouds, digital terrain elevation data are displayed instead. High clouds appear as the orange and red areas, and mountainous areas appear light blue and green. The position of the clouds within the 70-degree image are slightly southward of their location in the elevation map as a consequence of geometric parallax.

Major sources of air pollutants within the basin enclosing the Mexico City urban area include exhaust from 3.5 million vehicles, thousands of industries, and mineral dust. The ancient lakebed valley in which Mexico City is situated became a major source of dust when it was drained in the 16th century. The city basin stretches approximately 70 kilometers wide; it is reported that the local air quality causes the surrounding mountains to be rarely visible from the urban center.

The Multi-angle Imaging SpectroRadiometer views almost the entire Earth every 9 days. These images were acquired during Terra orbits 6966 and 10461 and cover an area of 330 kilometers x 464 kilometers. They utilize data from blocks 75 to 77 within World Reference System-2 path 26.