A Change of Seasons on Saturn 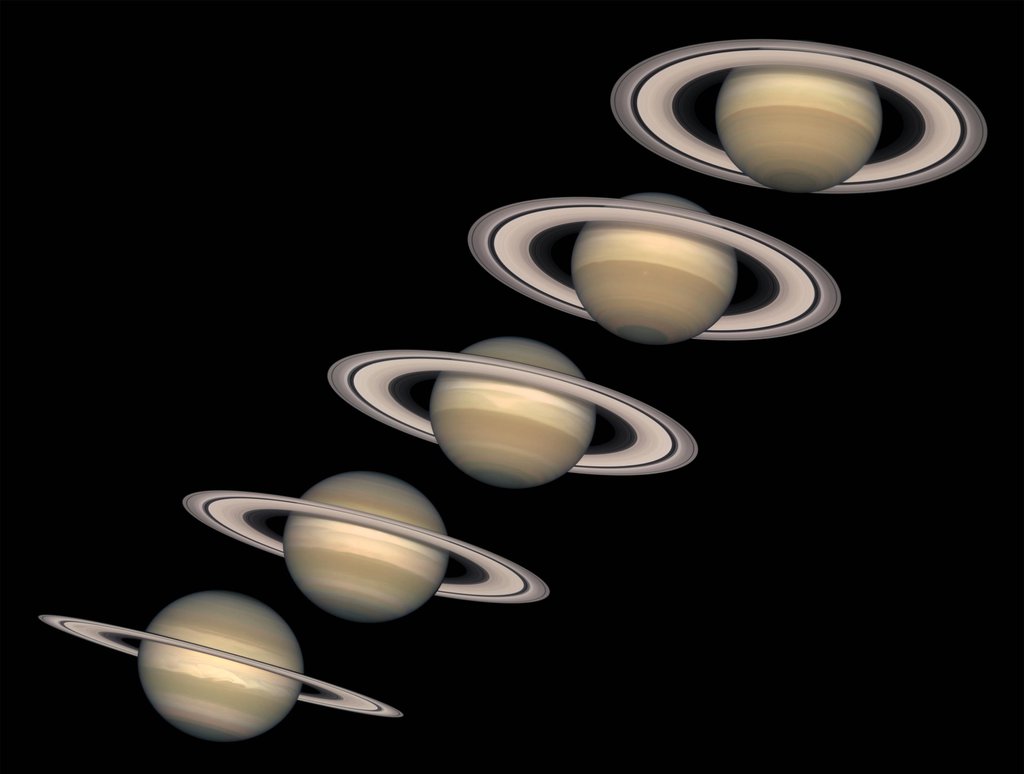 Looming like a giant flying saucer in our outer solar system, Saturn puts on a show as the planet and its magnificent ring system nod majestically over the course of its 29-year journey around the Sun. These Hubble Space Telescope images, captured from 1996 to 2000, show Saturn's rings open up from just past edge-on to nearly fully open as it moves from autumn towards winter in its Northern Hemisphere (For individual images see: PIA03158, PIA03159, PIA03160, PIA03161, and PIA03162).

Saturn's equator is tilted relative to its orbit by 27 degrees, very similar to the 23-degree tilt of the Earth. As Saturn moves along its orbit, first one hemisphere, then the other is tilted towards the Sun. This cyclical change causes seasons on Saturn, just as the changing orientation of Earth's tilt causes seasons on our planet. The first image in this sequence, on the lower left, was taken soon after the autumnal equinox in Saturn's Northern Hemisphere (which is the same as the spring equinox in its Southern Hemisphere). By the final image in the sequence, on the upper right, the tilt is nearing its extreme, or winter solstice in the Northern Hemisphere (summer solstice in the Southern Hemisphere).

Astronomers are studying this set of images to investigate the detailed variations in the color and brightness of the rings. They hope to learn more about the rings' composition, how they were formed, and how long they might last. Saturn's rings are incredibly thin, with a thickness of only about 30 feet (10 meters). The rings are made of dusty water ice, in the form of boulder-sized and smaller chunks that gently collide with each other as they orbit around Saturn. Saturn's gravitational field constantly disrupts these ice chunks, keeping them spread out and preventing them from combining to form a moon. The rings, as shown here, have a slight pale reddish color due to the presence of organic material mixed with the water ice.

Saturn is about 75,000 miles (120,000 km) across, and is flattened at the poles because of its very rapid rotation. A day is only 10 hours long on Saturn. Strong winds account for the horizontal bands in the atmosphere of this giant gas planet. The delicate color variations in the clouds are due to smog in the upper atmosphere, produced when ultraviolet radiation from the Sun shines on methane gas. Deeper in the atmosphere, the visible clouds and gases merge gradually into hotter and denser gases, with no solid surface for visiting spacecraft to land on.

The Cassini/Huygens spacecraft, launched from Earth in 1997, is well on its way to the Saturn system. It will arrive in 2004 to land a probe on Titan, Saturn's largest moon, and to orbit the planet for four years for a detailed study of the entire Saturn system.

These images of Saturn were taken with the Wide Field Planetary Camera 2 onboard Hubble.