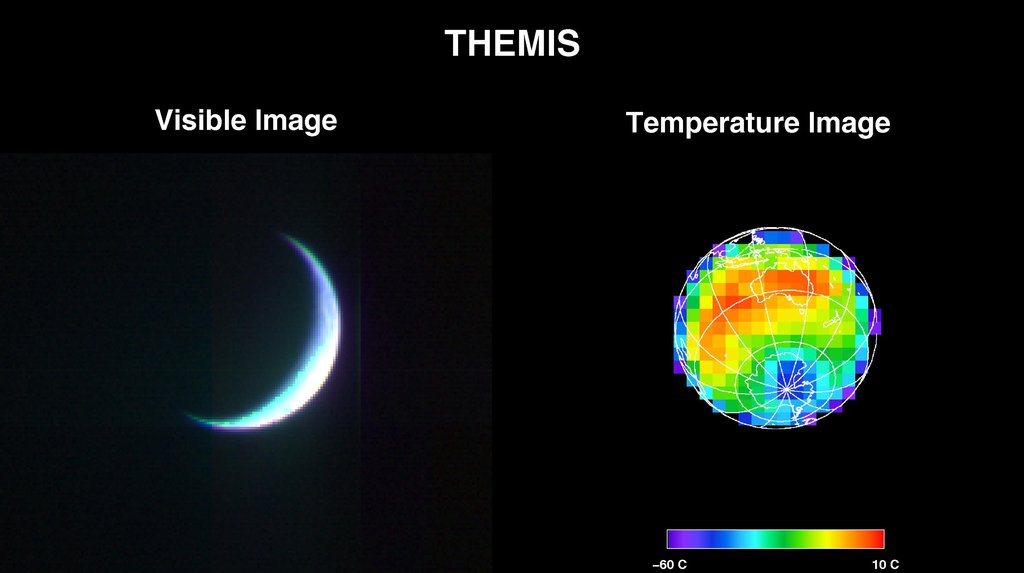 2001 Mars Odyssey's Thermal Emission Imaging System (THEMIS) acquired these images of the Earth using its visible and infrared cameras as it left the Earth. The visible image shows the thin crescent viewed from Odyssey's perspective. The infrared image was acquired at exactly the same time, but shows the entire Earth using the infrared's "night-vision" capability. Invisible light the instrument sees only reflected sunlight and therefore sees nothing on the night side of the planet. In infrared light the camera observes the light emitted by all regions of the Earth. The coldest ground temperatures seen correspond to the nighttime regions of Antarctica; the warmest temperatures occur in Australia. The low temperature in Antarctica is minus 50 degrees Celsius (minus 58 degrees Fahrenheit); the high temperature at night in Australia 9 degrees Celsius(48.2 degrees Fahrenheit). These temperatures agree remarkably well with observed temperatures of minus 63 degrees Celsius at Vostok Station in Antarctica, and 10 degrees Celsius in Australia. The images were taken at a distance of 3,563,735 kilometers (more than 2 million miles) on April 19, 2001 as the Odyssey spacecraft left Earth.