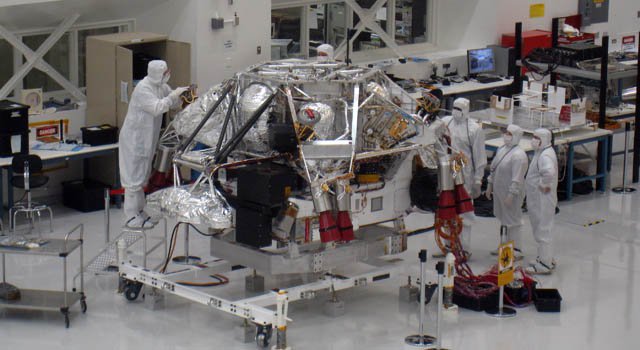 Join us for a rare opportunity to go behind-the-scenes to see engineers and technicians as they work on the Mars Science Laboratory, which is scheduled to launch in 2011.

What goes into building a mission destined for Mars? NASA's Mars Science Laboratory is being assembled and tested right now in the clean room at JPL. Join us for a rare opportunity to go behind-the-scenes to see engineers and technicians as they work on this project which is scheduled to launch in 2011.

The live clean room video will be available on Ustream TV on Feb. 24 beginning at 10 a.m. Pacific. David Gruel, manager of assembly, test and launch operations for NASA's Mars Science Laboratory, will be answering your questions from 11 a.m. to 11:30 a.m. Ashwin Vasavada, deputy project scientist for the mission, will answer questions between 11:30 a.m. and noon. The Mars Science Laboratory rover is some five times heavier and more capable than any of its predecessors. The roaming laboratory will carry a Swiss army-like toolkit to explore sites on Mars that may be favorable for supporting microbial life.

To participate in the live chat, go to http://www.ustream.tv/channel/nasajpl . After the event, video of the chat will be archived for later viewing on the same site in the "video clips" box.

› A video overview of the mission: http://jpl.nasa.gov/video/index.cfm?id=786

› An archived Webcast lecture on the mission is at: http://www.jpl.nasa.gov/events/lectures.cfm?year=2008&month=10#fragment-5

› More about MSL at: http://marsprogram.jpl.nasa.gov/msl/