The Ingenuity Mars Helicopter and the Mars 2020 Perseverance rover launched together from Cape Canaveral, Florida, on July 30, 2020. Both will arrive at the surface of Marsâ Jezero Crater on Feb. 18, 2021. Once the Perseverance team has completed a detailed checkout of the roverâs systems and subsystems and once both the rover and helicopter teams have agreed upon a good drop-off location, Ingenuity will be deployed and begin its flight test program. This is expected to take place in the first few months after landing. The Ingenuity Mars Helicopter flight test program will span no more than 30 sols (a sol is one Mars day, which is 24 hours, 39 minutes, and 35.244 seconds).

As soon as the Ingenuity technology demonstration is complete, the Mars 2020 rover will transition into its science operations phase. During a prime mission that will last at least one Mars year (about 687 Earth days), Perseveranceâs investigations in Jezero Crater will address high-priority science goals for Mars exploration â among them, searching for signs of ancient microbial life and collecting Martian rock and regolith (broken rock and dust) for future return to Earth. The results of Ingenuityâs flight test program will have no bearing on the Mars 2020 Perseverance rover missionâs science goals or success. Find more information about the mission in the Perseverance rover press kit.

The helicopter team has a sequence of objectives for this high-risk, high-reward project. The team has already successfully completed the first major objective:

To demonstrate powered flight in the thin atmosphere of Mars is possible.

After the testing on Earth, the team now aims:

To actually fly the helicopter on Mars.

The helicopter experiment will also inform engineers about:

Use of miniaturized flying technology in space.

Autonomous operations of an aerial system at another planet or moon. 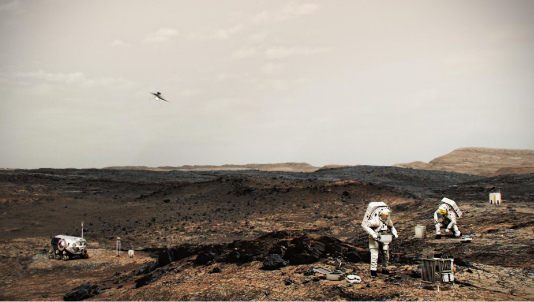 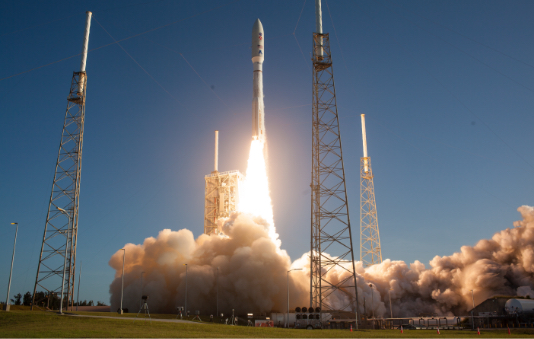 The Mars Helicopter was designed to fly at the Red Planet, but it needs help to survive the space environment and the extreme temperatures of interplanetary cruise or entry, descent, and landing (EDL) on Mars. For these phases of the project (as well as early surface operations before the helicopterâs deployment), Ingenuity will rely on the Mars 2020 Perseverance mission to provide power, a communications link to Earth, and shielding from both micrometeorites and entry heating.

The Perseverance rover, with Ingenuity attached to its belly and protected by a debris shield (that protects the helicopter from rocks kicked up during Perseveranceâs landing), launched from Space Launch Complex 41 at Cape Canaveral Air Force Base on July 30, 2020, at 7:50 a.m. EDT (4:50 a.m. PDT) aboard a two-stage United Launch Alliance (ULA) Atlas V 541 rocket.

During cruise to Mars, the Perseverance rover, its descent stage, and the Ingenuity Mars Helicopter are encased inside a capsule known as an aeroshell; the aeroshell is attached to the disk-shaped, solar-powered cruise stage.

Among the numerous housekeeping tasks the mission team performs during cruise is a biweekly recharge of Ingenuityâs batteries. The closely monitored one- to two-hour operation includes checking the rotorcraftâs six lithium-ion batteries as well as bringing the charge level of each back up to about 35% â the level of charge the Ingenuity team has determined is optimal for battery health during cruise.

To reach the Martian surface, Ingenuity remains attached to Perseveranceâs chassis as the roverâs EDL system carries them to the surface in a fast-paced set of milestones that last about seven minutes. Not only is the choreography of EDL complex, but the time delay involved in communicating with Earth means that the spacecraft has to accomplish this choreography all by itself. Many engineers refer to this complex sequence of events as the âseven minutes of terror.â 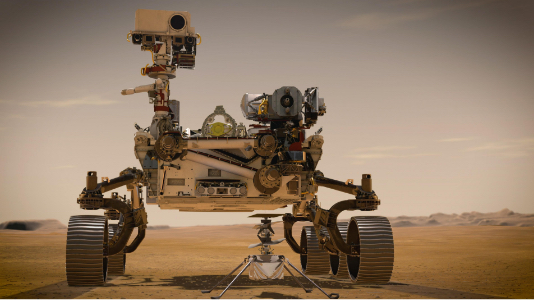 The rover should touch down in the Martian afternoon â about 3:53 p.m. local mean solar time. Soon after, the roverâs computer switches from entry, descent, and landing (EDL) mode to surface mode. This initiates autonomous activities for Sol 0, the first Martian day on the surface of the Red Planet.

During Perseveranceâs Surface Operations Transition Phase, engineers begin the commissioning process, checking to confirm that all rover systems, subsystems, and instruments are ready to proceed with surface mission objectives. Still connected to the belly of the rover via the Mars Helicopter Delivery System, Ingenuity will receive its own checkout as well as a battery charging within a couple sols of landing.

For the first few months, including the time the helicopter is conducting test flights, the Perseverance and Ingenuity operations teams will work on Mars time, which means they will be setting their clocks to sync with the Martian day (about 40 minutes longer than an Earth day). This allows them to respond quickly to any issue the rover or helicopter might have and to prepare revised instructions for the next sol.

After commissioning is complete, the rover and helicopter teams will search for the best natural airfield in the vicinity. The airfield is a 33-by-33-foot (10-by-10-meter) region where the helicopter will always take off and return. It will fly within an area called the flight zone. The rover will visit the top candidate airfield, using its navigation cameras to provide detailed surface imaging and digital elevation maps.

The Mars 2020 mission has determined that wherever Perseverance lands within its 4.8-by-4.1-mile (7.7-by-6.6-kilometer) landing ellipse, there is a 75% probability of finding a good airfield for Mars Helicopter flight operations within 330 feet (100 meters). But a certifiable airfield could be more distant and take longer to identify and confirm. 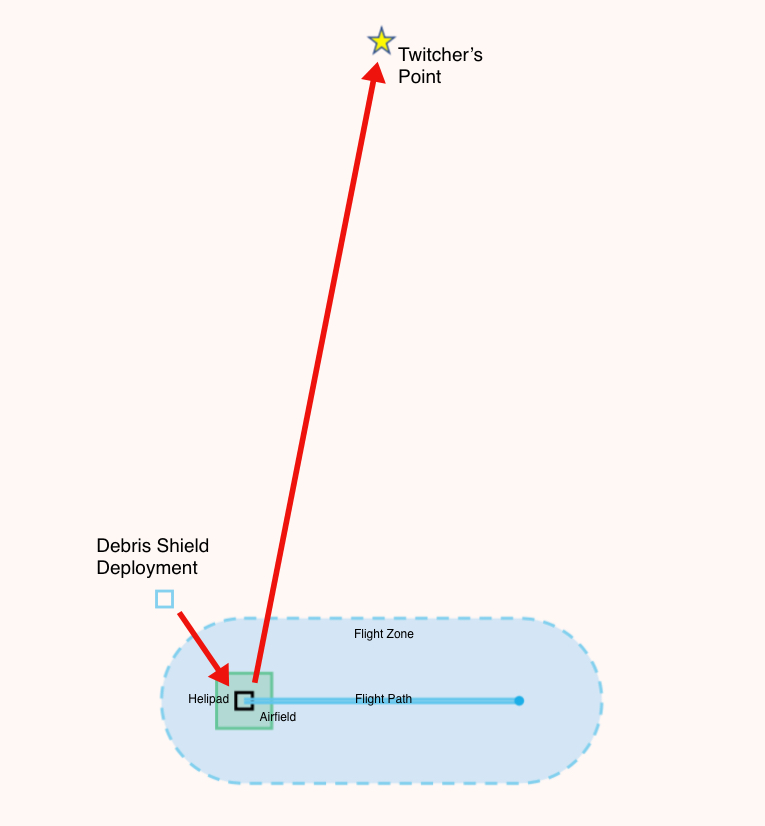 A schematic of the flight zone (blue oval) where Ingenuity will conduct its first flight activities. First, Perseverance will drop the debris shield covering Ingenuity, drive to the helipad (innermost box) to drop off the helicopter, and then move out to a safe distance at Twitcherâs Point (the star). The helicopter would start its test program at the helipad, fly out a pre-programmed flight path, and return again to the helipad. Image credit: NASA/JPL-Caltech | View larger image

Engineers looking for a desirable airfield will evaluate the following criteria:

This sequence of activities, which is expected to take 10 sols if all goes well, begins with the deployment of the debris shield and ends with the helicopter on the surface of Mars. Each step is accompanied by communications back to Earth (via the rover and orbiters and NASAâs Deep Space Network) along with periodic transmission of pictures taken by the roverâs cameras, including the WATSON imager that is part of the SHERLOC instrument located on the end of the roverâs robotic arm.

This period will include the roverâs drive to the center of the helipad, the release of the lock on the Mars Helicopter Delivery System and slow rotation of the helicopter down to the surface, deployment of the helicopterâs legs, the charging of the batteries to 100%, and then the gentle drop 6 inches (15 centimeters) to the surface on the last sol. After the drop, Perseverance drives away to expose Ingenuity to the Sun so the helicopter can recharge its batteries.

Once Ingenuity is deployed to the surface, it has 30 sols (31 Earth Days) to complete its activities. The first phase is a commissioning process that is expected to take about a week; then the first flight tests begin. 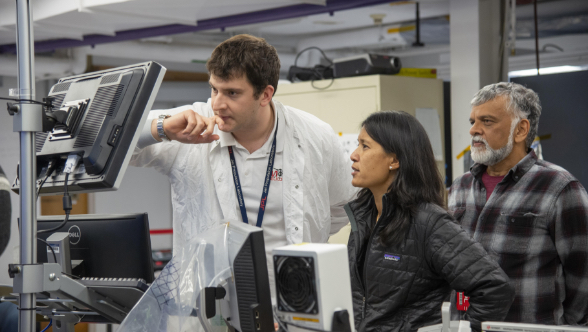 At the beginning of Ingenuityâs surface operations, the helicopter will aim to hit the following milestones:

Once Ingenuity is certified for its test flights, it will attempt:

If all those steps are successful, Ingenuity will attempt up to four additional test flights.

Mars Flight Test No. 1 is scheduled to launch at about 11 a.m. local time on Mars, when winds in the area are expected to be lightest and the battery will be at an adequate state of charge. In addition to using existing wind models, the teams will also be regularly checking data from the roverâs Mars Environmental Dynamics Analyzer (MEDA) instrument, which will provide data on the winds in the vicinity.

By the time of liftoff, the helicopterâs flight computer will have autonomously run through a series of preflight checks and run the rotor system to around 2,400 rpm. If everything remains go, the computer will command the rotor blades to change their angle, or pitch, taking a deeper bite into the tenuous Martian atmosphere. The first attempt at powered, controlled flight from Mars will begin a fraction of a second later.

Flight tests will be divided into three-sol blocks. In addition to flying the helicopter, engineers use the first sol of each block for activities, including finalizing and transmitting the command sequences and acquiring preliminary data after the flight testâs completion. As soon as these first glimpses (including two low-resolution images taken in-flight) are downlinked, the Ingenuity team will begin reconstructing the vehicleâs performance and planning the next sortie. The second dayâs communication from the helicopter will include all the engineering data acquired during the test. The images taken during the flight (up to four black-and-white navigation and three color) will be received on Day 3, providing the helicopter team an even clearer âpictureâ of what took place in the air millions of miles away. Later that evening, the team will meet to decide whether to begin a new test block the following day and, if so, what kind of flight profile to attempt.

Flight Test No. 2 and Beyond
If the team declares the first test flight a success, the goals of Flight Test No. 2 could be expanded to include climbing to 16 feet (5 meters) and then flying horizontally for a few feet (meters), flying horizontally back to descend, and landing within the airfield. Total flight time could be up to 90 seconds. Images from the helicopterâs navigation camera will later be used by project team members on Earth to evaluate the helicopterâs navigation performance.

If the second experimental test flight is a success, the goals of Flight Test No. 3 could be expanded to test the helicopterâs ability to fly farther and faster â up to 160 feet (50 meters) from the airfield and then return. Total flight time could be up to 90 seconds.

If the project timeline allows for Flight Tests No. 4 and 5, the goals and flight plans will be based on data returned from the first three tests. The flights could further explore Ingenuityâs aerial capabilities, including flying at a time of day where higher winds are expected and traveling farther downrange with more changes in altitude, heading, and airspeed.

Based 330 feet (100 meters) from the center of Ingenuityâs airfield, Perseverance will have an unencumbered view of the helicopter, whether on the surface or in flight. The rover will act as a communications relay between Ingenuity, Mars orbiters, and mission controllers on Earth. Perseveranceâs MEDA instrument is expected to provide meteorological information (including data on airborne dust), while its Mastcam-Z and navigation cameras will collect still images of Ingenuity â and possibly a video or two. The roverâs two microphones (one located on the SuperCam instrument; the other, on its chassis) will attempt to pick up the sounds of the flight operations.

At the conclusion of the Ingenuity Mars Helicopter flight test program, Perseverance will begin to carry out its ambitious science mission: searching for signs of ancient microbial life, characterizing the climate and geology of Mars, and collecting carefully selected samples for future return to Earth. Find more on Perseveranceâs science objectives in the Science section of the Perseverance rover press kit.