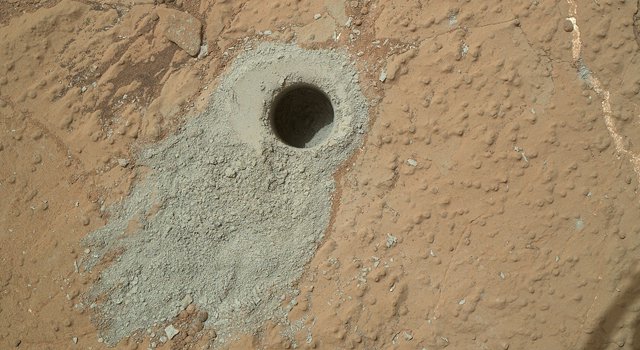 NASA's Mars rover Curiosity drilled into this rock target, "Cumberland," during the 279th Martian day, or sol, of the rover's work on Mars (May 19, 2013) and collected a powdered sample of material from the rock's interior. Analysis of the Cumberland sample using laboratory instruments inside Curiosity will check results from "John Klein," the first rock on Mars from which a sample was ever collected and analyzed. The two rocks have similar appearance and lie about nine feet (2.75 meters) apart.› Full image and caption
Credit: NASA/JPL-Caltech/MSSS

This pair of images from the Mars Hand Lens Imager (MAHLI) on NASA's Mars rover Curiosity shows the rock target "Cumberland" before and after Curiosity drilled into it to collect a sample for analysis. The diameter of the drilled hole is about 0.6 inch (1.6 centimeters).› Full image and caption
Credit: NASA/JPL-Caltech/MSSS

NASA's Mars rover Curiosity has used the drill on its robotic arm to collect a powdered sample from the interior of a rock called "Cumberland."

PASADENA, Calif. - NASA's Mars rover Curiosity has used the drill on its robotic arm to collect a powdered sample from the interior of a rock called "Cumberland."

Plans call for delivering portions of the sample in coming days to laboratory instruments inside the rover. This is only the second time that a sample has been collected from inside a rock on Mars. The first was Curiosity's drilling at a target called "John Klein" three months ago. Cumberland resembles John Klein and lies about nine feet (2.75 meters) farther west. Both are within a shallow depression called "Yellowknife Bay."

The hole that Curiosity drilled into Cumberland on May 19 is about 0.6 inch (1.6 centimeters) in diameter and about 2.6 inches (6.6 centimeters) deep.

The science team expects to use analysis of material from Cumberland to check findings from John Klein. Preliminary findings from analysis of John Klein rock powder by Curiosity's onboard laboratory instruments indicate that the location long ago had environmental conditions favorable for microbial life. The favorable conditions included the key elemental ingredients for life, an energy gradient that could be exploited by microbes, and water that was not harshly acidic or briny.

NASA's Mars Science Laboratory Project is using Curiosity to assess the history of habitable environmental conditions inside Gale Crater. After a few more high-priority observations by the rover within and near Yellowknife Bay, the rover team plans to start Curiosity on a months-long trek to the base of a layered mound, Mount Sharp, at the middle of the crater. JPL, a division of the California Institute of Technology in Pasadena, manages the project for NASA's Science Mission Directorate in Washington.