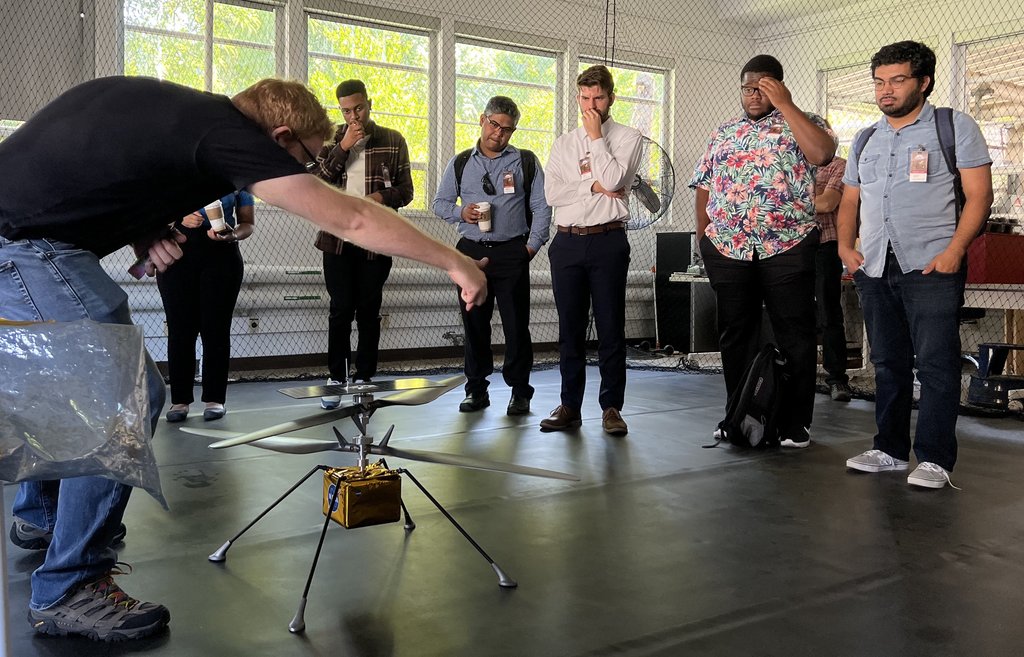 Three teams selected for the agency’s first MSI Space Accelerator visited the Jet Propulsion Laboratory to work with mentors in an inspiring conclusion to the 10-week program.

After months of working on technology concepts through a unique NASA program called the Minority Serving Institutions Space Accelerator, three university teams of professors and students received hands-on coaching at a place where their visions could one day become reality: the agency’s Jet Propulsion Laboratory in Southern California.

The teams – from Fayetteville State University (FSU) in North Carolina, University of Massachusetts Boston, and California State University, Northridge (CSUN) – participated in the 10-week accelerator program in which they were encouraged to think and act like small startup businesses. During the program, the teams received funding, training, and mentorship to develop their concepts and move their ideas further along toward commercialization. The teams are all working on systems that could operate without human oversight for potential use on future science missions in space or on Earth.

The teams had been selected in early June through a NASA-sponsored competition calling for concepts to advance the agency’s goals and meet its needs in the areas of machine learning, artificial intelligence, and development of autonomous systems. The competition was geared toward engaging underrepresented academic institutions and reducing barriers for them to submit ideas to NASA.

As part of their two-day JPL visit during the week of Aug. 15, the teams learned about patenting new technologies, writing grant proposals, and telling the “story” of their concepts.

For Khali Crawford, a senior computer science major at FSU, participation in the accelerator meant exposure to business strategy and pitching to venture capitalists, which was a highlight for him, especially in terms of learning to translate the technical aspects of his team’s proposal for a wider audience.

“When I was asked to join this team, it was a bit more business-oriented in the beginning. I was kind of not really vibing with it. I don’t like business,” Crawford said. “But the experience has been awesome. … The big thing is, your ability to describe what you did trumps what you actually did. I might have some new technology, but if I can’t convey it to you, you won’t really care about it.”

The teams got in-person feedback to hone their projects. They also had a chance to spend time at JPL locations where NASA missions have likewise been refined, including the Mars Yard, where rover technology is tested, and the Lab’s venerable Spacecraft Assembly Facility.

“Having this group at the Lab – and especially seeing their concepts advance so much in 2 ½ months – has been really rewarding,” said Tom Cwik, who manages JPL’s Office of Space Technology, which is coordinating the accelerator for NASA. “We want to engage, engage, engage. We’re thrilled to be growing this community – working with startups and now with teams at minority-serving institutions.”

The FSU concept, under computer science professor Sambit Bhattacharya, who runs the university’s Intelligent Systems Laboratory, is dubbed Autonomous Systems With On-Demand Inference From Perception Pipelines. Crawford referred to it as “accelerating AI at the edge” and said he would explain the concept to his grandmother as a way to dramatically reduce the amount of time it takes complete tasks on her cellphone.

Also participating in the accelerator is a team led by professors Kyle Dewey and Nhut Ho of the Autonomy Research Center for STEAHM at CSUN that is developing a new programming language, Proteus, designed for writing aerospace software. The Massachusetts team, led by engineering professor Tomas Materdey, is working on a system of autonomous drones, recharging stations, and sensor nodes.

The teams received awards of $50,000 as prizes for their initial concepts. And now that they’ve been through the accelerator, they’re better positioned to compete for such awards in the future. The program’s goal of promoting entrepreneurship took a leap forward when each of the teams established themselves as limited liability corporations.

Opportunities for additional funding are anticipated: NASA’s Advanced Information Systems Technology program is planning an open solicitation – with awards of up to $1 million per year – in the summer of 2023 that may include topics related to trusted autonomy, artificial intelligence, and machine learning.

The accelerator is a partnership between NASA’s Science Mission Directorate, its Earth Science Technology Office, the Minority University Research Education Project within the agency’s Office of STEM Engagement, JPL, and Starburst, a global aerospace accelerator company based in Los Angeles.

To learn more about the MSI Space Accelerator, visit: