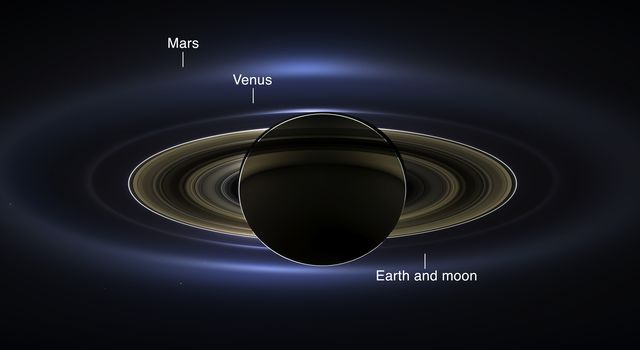 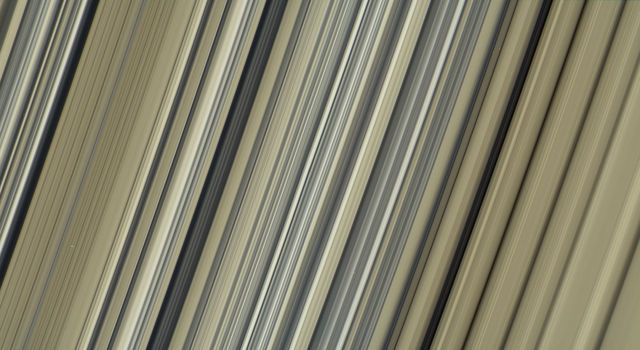 Jewel of the Solar System: Part 3 â Discovering Saturn: The Real 'Lord of the Rings' 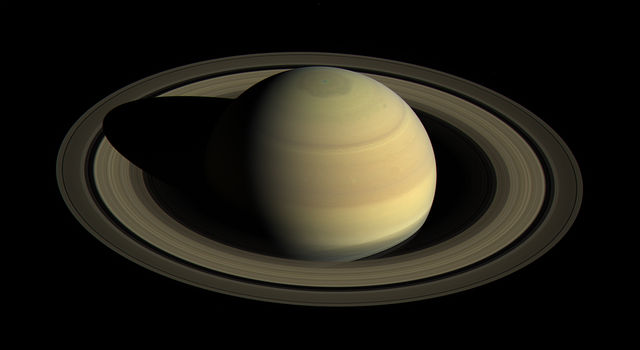 In this activity, split into two approximately 40-minute sessions, youth will:

Saturn is the sixth planet from the sun and is often called, "The Jewel of the Solar Systemâ because of its beautiful rings. It is the second largest planet in our solar system. Saturn is named for the Roman god of agriculture.

The spacecraft Cassini-Huygens (pronunciation: cuh SEEN ee / HOY gens) was launched from Earth in 1997 and arrived at Saturn in July 2004. It is exploring the mysteries of Saturn, its rings and many moons; it has been zooming past Saturn and its moons regularly since 2004. The Huygens Probe landed on Saturnâs largest moon, Titan, in January 2005. The Cassini spacecraft will continue to orbit Saturn and send back data until September 15, 2017, when it will dive into Saturn's atmosphere, sending science data for as long as its small thrusters can keep the spacecraft's antenna pointed at Earth. Soon after, Cassini will burn up and disintegrate like a meteor. Explore more information about Saturn and the Cassini mission on NASAâs Cassini mission website.

This computer-animated film highlights Cassini's accomplishments at Saturn and features the science-packed final orbits between April and September 2017. âº Download the video

Science is a way of thinking and doing things, called inquiry. Identifying questions forms the basis for inquiry throughout this program unit.

Now itâs time to make your first log entry. Many scientists log their thoughts and questions every day. Itâs part of recording their journey to discovery. Sometimes they draw pictures and illustrations and label key things about them.

You can look at these sample news articles to see how items can be documented and labeled to make them clear to others. (Show the students the sample(s) youâve collected.)

For so many centuries, people have looked up into the sky but have not really known what Saturn looked like. Scientists wondered a lot of things about the planet. Then they were able to look through telescopes and see the planets more clearly. Now that NASA has sent a robotic spacecraft all the way to Saturn, we have views that early scientists never thought possible. 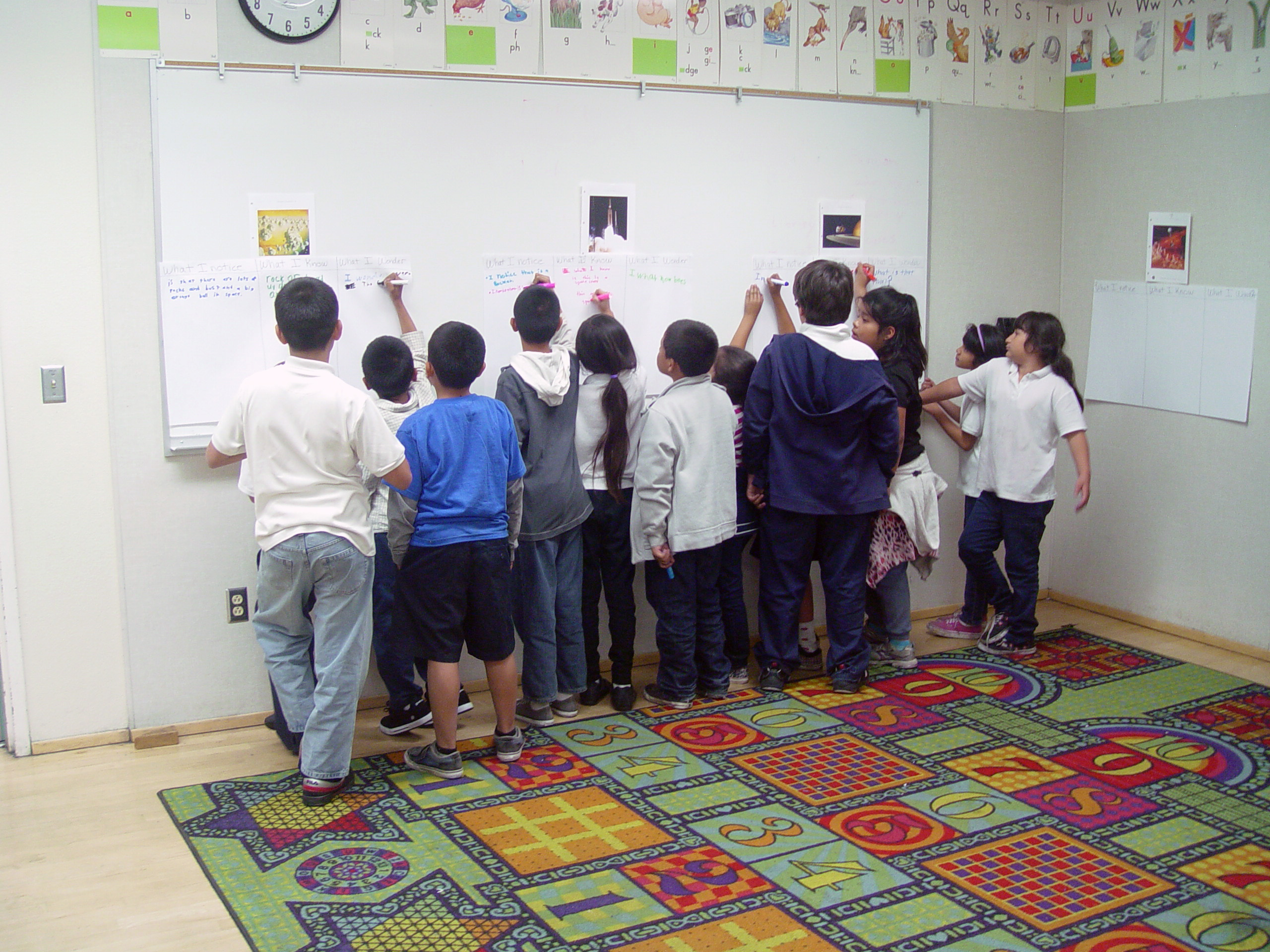 Students write their observations about each of the Cassini images. Image credit: NASA-JPL/Caltech

Now weâll begin learning about the planet Saturn and the Cassini-Huygens mission by looking at some images and making careful observations about them. Note there are seven different images around the room. Your team will start by studying one of the images, discussing it, and writing down only those things you notice from looking at the image. Only include observations and claims that you can support with evidence you see in the image. (Some examples include: "I notice the planet has rings." "I notice a dark space in the rings." "I notice there appear to be bands of different colors on the planet.")

Write your teamâs observations in the âWhat I Noticeâ column of the chart paper next to the image.

Scientists work as teams in all stages of a space mission, so as you discuss the image, make sure that everyone on your team contributes observations and questions.

Next, think about what questions you have about whatâs pictured in the image. Write those down in the âWhat I Wonderâ column. (Following from the previous examples, you could wonder why there are different colors on the planet, and what the weather is like on Saturn. For example: "I wonder what would cause the dark space in the rings." "I wonder who or what took this picture of Saturn." "I wonder if it is a real picture.")

Leave the âWhat I Knowâ column blank for now.

Iâll give you a signal when itâs time for your team to move to the next image and add to what the previous team wrote.

I wonder how thick Saturnâs rings are.

I wonder what will happen to the spacecraft as it passes through the rings.

I wonder what causes storms in Saturnâs atmosphere.

I wonder if we will get some good pictures showing the particles in the rings.

I wonder what the mission probe will find out about the moon Titan.

I wonder if there is an ocean on Titan.

I wonder how fast the winds are on Titan.

I wonder what the rings are made of.

Saturn has a moon called Iapetus. One side is very bright, almost as bright as fresh snow, and the other side is as dark as soot. I wonder how it got that way?

Letâs discuss a few things we know about whatâs in these images, and how we know it. For us to be able to claim we âknowâ something, we need to have accurate evidence from a reliable source. Scientific claims canât be based on hearsay or opinions. We need to think about how the claim has been tested and proven.

We might claim, for example, that the surface of Saturnâs moon Titan is cold. We might think this because Saturn and Titan are so far away from the Sun. But we must have direct evidence for this before we can say it is true. If we are researching what others have already learned, we can look for reliable sources for that information, such as a teacher, textbook, science museum or website that has been reviewed by scientists. If we are looking to discover it ourselves, we would need to design and conduct an experiment to measure the temperature (and perhaps send our own probe there to find out).

With that in mind, what are some things we can reliably say we know about Saturn and Cassini? How do we know they are accurate? (Examples: "I know that Saturn has many moons. Cassini has taken images of them and scientists have published them on a NASA website." "I know that Titan has an atmosphere, because engineers used a parachute to land the Huygens Probe (a parachute needs an atmosphere to open).") When students suggest a claim, ask them to name the reliable source and/or evidence that supports it. This can be an opportunity to reinforce internet literacy.

Weâll continue to learn about Saturn and record what we know throughout this program.

After each session, ask yourself the following questions:

Taking Science to the Next Level

The Cassini spacecraft passes by Saturn and Titan regularly. The Cassini status countdown clock forecasts when the spacecraft will pass by next and send back pictures of these other worlds.

Consider asking the leader in another room to do the same exercise (perhaps just the drawing portion of the activity if it is a room of younger children). The children can meet to share and talk about what they drew and why.

You may want to have the gallery of images from the Cassini mission bookmarked on the computer for the students to explore â or print them and post them around the room.

Postcards and letters are a fun alternative for publishing studentsâ descriptive writing about Saturn. Student pieces can be compiled into a group book, used for individual mini-books, or as text for âPostcards from Saturnâ to be shared with kids in another classroom, pen pals, or family/friends.

NASA has opportunities for fascinating careers. See the current job postings at NASAâs Jet Propulsion Laboratory. Share one of the listings with your students (you will have to summarize the listing for most teams) and ask them to describe how to qualify for these positions. How does someone become the Senior Orbit Determination Engineer? The Origins of Stars and Planets Group Research Scientist? Ask students what other kinds of jobs they think might be at NASA. Chart their responses and post them in the room.