Crater Curiosity: A 'Pi in the Sky' Math Challenge

Quake Quandary: A 'Pi in the Sky' Math Challenge

The "Pi in the Sky" math challenge gives students a chance to take part in recent discoveries and upcoming celestial events, all while using math and pi just like NASA scientists and engineers. In this problem from the set, students use the mathematical constant pi to determine the rotation rate of the first interstellar asteroid that scientists detected in our solar system in 2017.

Astronomers recently scrambled to observe an intriguing asteroid that zipped through the solar system on a steep trajectory from interstellar space â the first confirmed object from another star.
Now, new data reveal the interstellar interloper to be a rocky, cigar-shaped object with a somewhat reddish hue. The asteroid, named 'Oumuamua by its discoverers, is up to one-quarter mile (400 meters) long and highly-elongated â perhaps 10 times as long as it is wide. That aspect ratio is greater than that of any asteroid or comet observed in our solar system to date. While its elongated shape is quite surprising, and unlike asteroids seen in our solar system, it may provide new clues into how other solar systems formed.
"For decades we've theorized that such interstellar objects are out there, and now â for the first time â we have direct evidence they exist," said Thomas Zurbuchen, associate administrator for NASA's Science Mission Directorate in Washington. "This history-making discovery is opening a new window to study formation of solar systems beyond our own."
Immediately after its discovery, telescopes around the world, including the European Southern Observatory (ESO) Very Large Telescope in Chile, were called into action to measure the object's orbit, brightness and color. Urgency for viewing from ground-based telescopes was vital to get the best data.
Combining the images from the FOcal Reducer and low dispersion Spectrograph (FORS) instrument on the ESO telescope using four different filters with those of other large telescopes, a team of astronomers led by Karen Meech of the Institute for Astronomy in Hawaii found that 'Oumuamua varies in brightness by a factor of 10 as it spins on its axis every 7.3 hours. No known asteroid or comet from our solar system varies so widely in brightness, with such a large ratio between length and width. The most elongated objects we have seen to date are no more than three times longer than they are wide.
"This unusually big variation in brightness means that the object is highly elongated: about ten times as long as it is wide, with a complex, convoluted shape," said Meech. "We also found that it had a reddish color, similar to objects in the outer solar system, and confirmed that it is completely inert, without the faintest hint of dust around it."
These properties suggest that 'Oumuamua is dense, composed of rock and possibly metals, has no water or ice, and that its surface was reddened due to the effects of irradiation from cosmic rays over hundreds of millions of years.
This activity provides students the opportunity to compute the rotation rate of 'Oumuamua in radians per second. 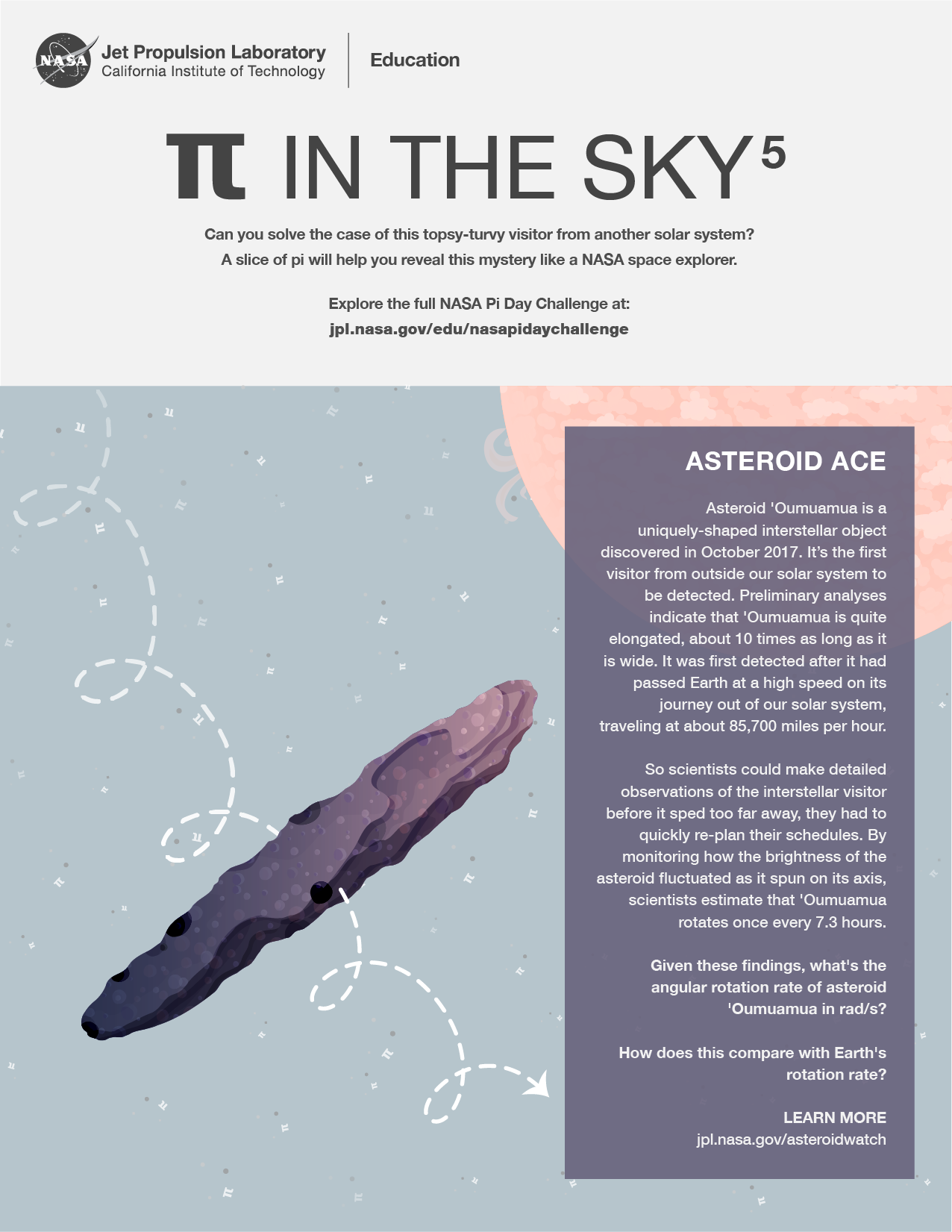