Dropping In With Gravitational Waves 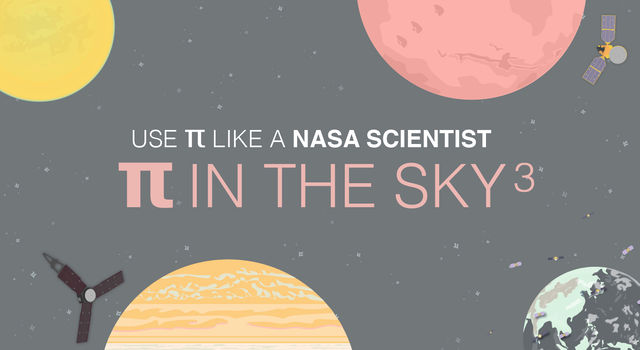 This activity is related to a Teachable Moment from March 14, 2016. See "Pi Day the NASA Way."

The third installment of the popular "Pi in the Sky" challenge, this illustrated problem set gives students a chance to put their pi skills to the test to solve some of the same problems NASA scientists and engineers do. Students will use pi to map the surface of Saturnâs hazy moon Titan, track the Mars Reconnaissance Orbiter as it explores the Red Planet, keep Earthâs satellites powered as Mercury transits the sun, and put the Juno spacecraft into orbit around Jupiter. Print it out, hand it out or view it online! The problem set is available as a poster, classroom handouts and an online slideshow that is mobile, tablet and screen-reader friendly.

March 14 marks the yearly celebration of the mathematical constant (pi), which represents the ratio of a circleâs circumference to its diameter. More than just a number for mathematicians, pi has all sorts of applications in the real world, including on missions developed by NASAâs Jet Propulsion Laboratory. And as a holiday that encourages more than a little creativity â whether itâs making pi-themed pies or reciting from memory as many of the never-ending decimals of pi as possible (the record is 70,030 digits) â itâs a great way to have fun and celebrate the M in STEM.