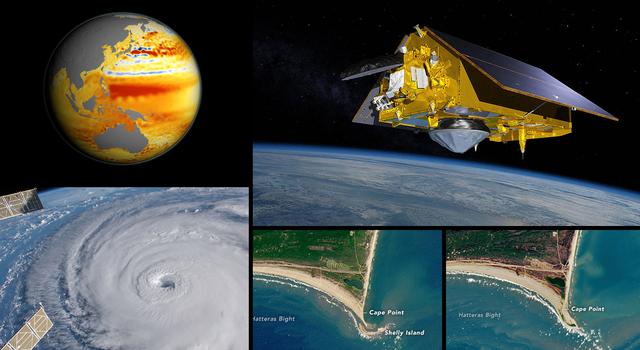 Learn about the mission and find out how to make classroom connections to NASA Earth science â plus explore related teaching and learning resources.

Read on to find out how the mission will measure sea-surface height for the next 10 years and provide atmospheric data to help better predict weather. Plus, find out how to watch the launch online and explore related teaching resources to bring NASA Earth science into the classroom and incorporate sea level data into your instruction.

To measure sea-surface height, a radar altimeter will send a pulse of microwave energy to the oceanâs surface and record how long it takes for the energy to return. The time it takes for the signal to return varies depending on the height of the ocean â a higher ocean surface results in a shorter return time, while a lower ocean surface results in a longer return time. A microwave radiometer will measure delays that take place as the signal travels through the atmosphere to correct for this effect and provide an even more precise measurement of sea-surface height.

This animation shows the radar pulse from the Sentinel-6 Michael Freilich satellite's altimeter bouncing off the sea surface in order to measure the height of the ocean. Image credit: NASA/JPL-Caltech | + Expand image

To measure atmospheric data, Sentinel-6 Michael Freilich is equipped with the Global Navigation Satellite System - Radio Occultation, or GNSS-RO, instrument, which will measure signals from GPS satellites â the same ones you use to navigate on Earth. As these satellites move below or rise above the horizon from Sentinel-6 Michael Freilich's perspective, their signals slow down, change frequency and bend as a result of the phenomenon known as refraction. Scientists can use these changes in the GPS signal to measure small shifts in temperature, moisture content, and density in the atmosphere. These measurements can help meteorologists improve weather forecasts.

Scientists from around the world have been collecting sea level measurements for more than a century. The data â gathered from tide gauges, sediment cores, and space satellites â paint a clear picture: sea level is rising. Looking at the average height of the sea across the planet, we see that in the last 25 years global sea level has been rising an average of 0.13 inches (3.3 mm) per year. This average is increasing each year (in the 2000s, it was 0.12 inches, or 3.0 mm, per year) as is the rate at which itâs increasing. That means that sea level is rising, and itâs rising faster and faster. Since 1880, global sea level has risen more than eight inches (20 cm). By 2100, it is projected to rise another one to four feet (30 to 122 cm).

Measuring sea level from space provides scientists with global measurements of Earthâs oceans in a matter of days, including areas far from shore where measurements arenât practical or possible. Starting in 1992 with the launch of the TOPEX/Poseidon mission, the record of sea level measurements from space has continued uninterrupted, providing an increasingly detailed picture of Earthâs rising seas. The Sentinel-6 Michael Freilich satellite â and its twin, which will launch in 2025 â will extend those measurements to 2030, allowing scientists to continue collecting vital information about Earthâs changing oceans and climate.

Unlike previous satellites that measured sea level, Sentinel-6 Michael Freilich has the capability to measure sea level variations more accurately near coastlines, giving scientists insight into changes that can have direct impacts on communities and livelihoods, such as commercial fishing and ship navigation.

This playlist for students and teachers features explainers about the causes and effects of sea level rise and how NASA is studying our changing planet â plus related STEM activities and experiments for students. | Watch on YouTube

With rising seas already impacting people and communities, it's important to understand not just how much seas are rising, but also where and how quickly they are rising. Data from instruments on Sentinel-6 Michael Freilich can be combined with data from other satellites to get a clearer picture of what's contributing to sea level rise and where. For example, by looking at the satellite's radar altimeter measurements along with gravity measurements from the GRACE-FO mission, scientists can better determine how melting ice and thermal expansion are contributing to sea level rise. And by tracking the movement of warm water (which stands taller than cold water), scientists can better predict the rapid expansion of hurricanes.

Scheduled to launch at 9:17 a.m. PST (12:17 p.m. EST) on November 21, Sentinel-6 Michael Freilich will launch atop a SpaceX Falcon 9 rocket from Vandenberg Air Force Base in California.

Make classroom connections to NASA Earth science with lessons about rising seas, thermal expansion and ice melt, data collection and graphing, and engineering. Plus explore independent activities and experiments students can do at home, video playlists, and more: