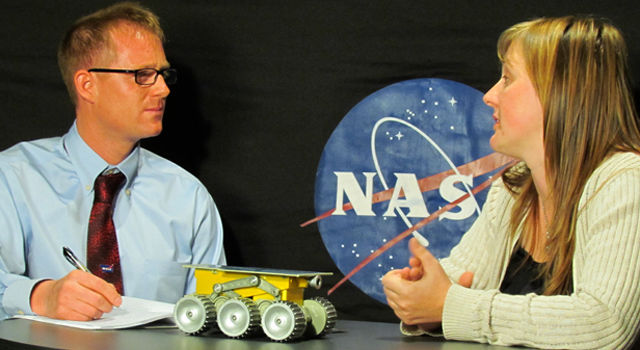 Two weeks before I returned to NASA's Jet Propulsion Laboratory in Pasadena, Calif., for my second internship working on projects with the Deep Space Network and the Department of Defense, something special happened. I was poised to present my research from JPL and Montana State University's Space Science and Engineering Laboratory -- where I've been building cube-satellites while going to school -- as part of the Montana Space Grant Consortium Research Symposium. The crowd was full of distinguished scientists and professors, but there was one face that stood out among the rest. She helped send robots to Mars, she's a famous public speaker, and she has a passion for space exploration. But more than that, her perseverance and drive are an inspiration to me. (Plus, like me, she's from Montana!)

The face I was looking at was that of Jaime Waydo, the mobility team lead mechanical systems engineer for NASA's next Mars rover, Curiosity, which is scheduled to land on Mars on August 5. An MSU mechanical engineering alum, Jaime went through the same program and schooling that I'm going through and was returning to her alma mater to speak to the next generation of explorers and engineers after working on two successful Mars rover missions and leading the mobility team on a third. Space Grant, the program that brought me to JPL for my internship, thought it would be a great idea that Jaime and I meet. (Little did I know she would be listening to my speeches!) What follows is our conversation, which not only highlighted the power of education -- and my JPL internship -- but also reaffirmed my passion to reach for the stars.

Me: Do you giggle every night when you go to bed knowing that you work for JPL?

Jaime: Umm, yes ... a little bit. I remember one time my boss looked at me and said, "Jaime, you've been putting in a ton of hours, we can get you some overtime pay," and I looked at him and I said, "I can't believe I get paid to work here!"

Me: When you were growing up in Montana, did you ever think that you would someday be working for NASA, or was that a childhood goal?

Jaime: In our science class in seventh grade, we learned about NASA's Viking spacecraft landing on Mars, and I was especially attracted to Viking because it landed the year I was born. I looked at my teacher and said, "I'm going to build stuff that will go to Mars!" The stars aligned, and I got to go to JPL at a time when there were Mars missions all the time. And I got to work on two of the most famous Mars landings of all time and soon to be a third. It's been a great career.

Me: How did you get to JPL?

Jaime: I was working at Perkins Family Restaurant during school at MSU in Bozeman, Montana. A couple would come in and eat everyday at 4 p.m., and one day the lady pulled me aside and said, "What are you doing with your life? I don't want you to be a waitress forever." And I said, "I go to school at MSU. I'm a mechanical engineer student, and my dream is to go work at JPL in California." The lady said, "My brother just retired from there. I'll bring him in." Two weeks later, her brother came in to Perkins and took my resume. Then, a week later, the famous Don Bickler [who leads the Advanced Mechanical Systems team for JPL] called. Don brought me in to JPL, where the stars aligned again, and gave me an internship in the group that was designing mobility systems to go to Mars. It was everything I had ever wanted.You learn to be really sharp when you work for Don. He's the father and inventor of Martian mobility.

Me: With all the pressure and stress of flight missions and landing on Mars, how do you leave the office and go home to a family and sleep?

Jaime: When you are on a flight project, everybody is 100 percent committed, and you know that even if your system is having bugs or not working today, other people are pulling it up by its bootstraps and helping to fix the problem. It's an incredible team that works at JPL, and you will never find, I don't think, in one spot, so many talented people in one place.

Me: Tell me about the bogie joint on Curiosity that you worked on and helped design for the rover. Is that new to suspension or mobility systems on rovers?

Jaime: No, it's not new; it's a take off of old train technology. It balances the weight between the two wheels. Sojourner had it, Spirit and Opportunity had it, and now Curiosity has it. When I started working on Curiosity, JPL asked me to run the mobility team, and I said ok, but I want to do hardware too. I was worried about a career trajectory that would take me into management and not be so technical, and I still really wanted to be technical. I'm really proud of the fact that I ran this amazing team of highly creative, talented people who allowed me to be a manager, and build hardware like the bogie joint at the same time, and to fulfill a lifelong dream of building hardware to go to Mars. [I look over at my father backstage who just retired from 46.5 years on the railroad, and Jaime says to him, "Bill, I bet there was a bogie joint on the train!" He grins from ear to ear and says, "Yep!"]

Me: Tell me about this? [I show Jaime a picture that I took at JPL last summer of a huge pink steel platform that was used as a test bed to work on the mobility system for the rover.] Jaime: [laughing] that's called the "Pink Pig." It's a piece of support equipment for the rover mobility system. I decided that we needed a little bit of "girl" in the mobility team. I was the only girl on the mobility team for a long time, and if I could do anything to make girls more excited about science and engineering, then I was going to do it. I figured that if girls saw this huge pink piece of equipment, and realized that a girl had been there and done that and worked on the rover, it would make girls excited. And it did. Engineering school is really hard: the all night studying, the thermodynamics. The fact that I made it through engineering school still blows my mind. It was tunnel vision focus to get to JPL to be on that spacecraft team. If I can do it, then I want to inspire other girls to go for it as well. Jaime had the idea to paint this piece of support equipment for the Curiosity rover bright pink to show girls that engineering can be fun. Image credit: NASA/JPL-Caltech

Not only does Jaime continue to inspire girls and boys alike, she inspires countless students and future engineers. She has a way of making you feel like you have the right stuff and should continue to shoot for the stars. The next time I see Jaime will be at JPL on August 5, when Curiosity is scheduled to land on Mars. On that night, when I look toward Mars in the sky, I'll know that Jaime was a part of paving the way for space exploration, my greatest passion.