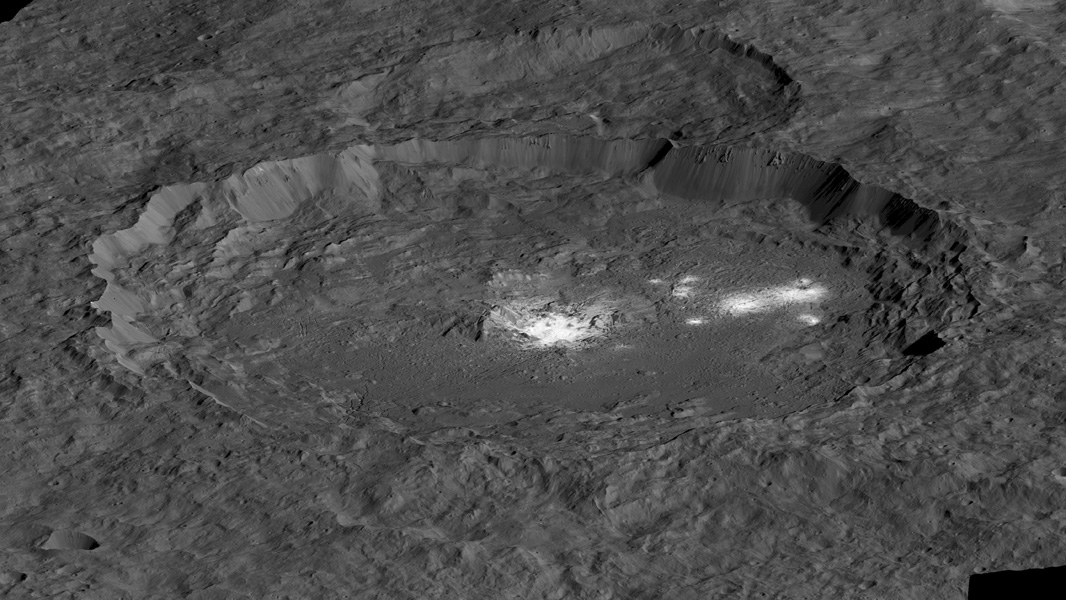 Dawn has now logged 4 billion miles (6.4 billion kilometers) on its unique deep-space adventure. Sailing on a gentle breeze of xenon ions, the ambitious explorer journeyed for nearly four years to what had been only a small, fuzzy orb for over two centuries of terrestrial observations. Dawn spent more than a year there transforming it into a vast, complex protoplanet. Having sent its Vestan riches safely back to distant Earth, Dawn devoted another 2.5 years to reaching another blank canvas and there created another masterpiece of otherworldly beauty. Permanently in residence at dwarf planet Ceres, Dawn is now preparing to add some finishing touches.

The Dawn flight team at JPL did not even take notice as the odometer rolled over to 4,000,000,000. They have been focused on intensive investigations of how to maneuver the spaceship to lower altitudes than ever anticipated and operate there. For more than eight months in 2015-2016, Dawn circled 240 miles (385 kilometers) above the exotic Cerean landscape. From there, the team piloted the probe to higher orbits to undertake new studies, not anticipating that they might devise new methods to safely go much lower.

There are many challenges to overcome in flying closer to the dwarf planet, and although progress has been excellent, much more work lies ahead before maneuvering can begin. Indeed, even as some team members took time off in December, work never stopped. Many computers operated continuously, running sophisticated trajectory calculations. Engineers will assess the results when they return at the dawn of the new year and then set the computers to work on the next set of problems.

Meanwhile, Dawn waits patiently, safe and healthy in an orbit that ranges from a little more than 3,000 miles (4,800 kilometers) to nearly 24,000 miles (39,000 kilometers). It takes 30 days to complete one revolution. The spacecraft will continue operating in this elliptical orbit at least until April, the earliest opportunity to start its descent.

Having lost the use of the reaction wheels that controlled its orientation, Dawn now relies on hydrazine propellant fired from the small jets of its reaction control system. But after years of interplanetary travels and extensive maneuvering to observe Ceres, the remaining supply is very low. There simply is not enough left for a circular orbit lower than the one the spacecraft has already operated in. Dawn has plenty of xenon propellant to perform all the thrusting with its ion engine to change its orbit, but the available hydrazine is insufficient to perform all the necessary turns and to maintain a stable orientation for pointing its ion engine, solar arrays, antenna and sensors.

To fly low with a paucity of hydrazine, controllers are devising plans for an elliptical orbit. In the previous Dawn Journal, we saw that they might try to steer Dawn down to less than 125 miles (200 kilometers). While more work remains (including all those calculations that are occupying a cluster of computers), the progress has been encouraging. They are now analyzing orbits in which Dawn might even dive below 30 miles (50 kilometers) and then glide up to about 2,500 miles (4,000 kilometers) almost once a day. With many analyses still to perform and plans to refine, engineers anticipate that Dawn has enough hydrazine to maneuver to and operate in such an orbit for two months, and perhaps even a little longer.

If Dawn does go so low, it will be an exciting ride. How cool to skim so close to an alien world! But controllers must be careful that the spaceship doesn't dip too low. We have described before that Dawn complies with a set of protocols called planetary protection (not entirely unrelated to the Prime Directive). The team must ensure that the final orbit is stable enough that Dawn will not contaminate the astrobiologically interesting Ceres even for decades after the mission concludes.

The primary reason to plunge down so close to the mysterious landscapes of rock, ice and salt -- apart from pure awesomeness -- is to sense the nuclear radiation emanating from Ceres with greater clarity than ever before. With its gamma ray and neutron detector (GRaND), Dawn's measurements of this radiation provide insight into the atomic constituents down to about a yard (meter) underground. We have discussed this before in detail, including how the measurements work and why after operating so close to Ceres, Dawn flew to a higher orbit to improve its data.

The radiation is so faint, however, that some elements can only be detected from much closer range than Dawn has been. This is akin to looking at a very dim object or taking a picture of it. From far away, where little light reaches your eyes or your camera, colors are difficult to discern, so the view may be nearly black and white. But if you could move in close enough to capture much more light, you could see more colors. If Dawn can move in much closer to capture more of Ceres' nuclear glow, it may be able to see more of the elements of the periodic table -- in effect, taking a more colorful picture.

We see most objects by reflected light that originates either on the sun or artificial light sources. The nuclear radiation Dawn sees from Ceres is principally caused by cosmic rays. Cosmic rays are a form of radiation that fills space and originates far outside our solar system, mostly from supernovas elsewhere in the Milky Way Galaxy. The brighter the cosmic rays, the brighter Ceres will seem to be. The atoms on and underground don't reflect cosmic rays that strike them. Rather, the cosmic rays cause them to emit neutrons and gamma rays that escape back into space and carry with them the identities of the atoms. So, we can think of this as cosmic rays illuminating a scene, and Dawn will make nuclear photographs, revealing more details of Ceres' composition.

In addition to the advantage of going very low, it turns out that there is a special benefit to performing these measurements in 2018. The sun's magnetic field, which reaches out far beyond the planets, weakens cosmic rays entering our solar system, partially dimming the illumination. But our star's magnetism waxes and wanes in a cycle of 11 years. The sun now is entering the part of this regular cycle in which the magnetic field is weak. And it just so happens that this is an unusually weak solar cycle, so the sun's ability to hold cosmic rays at bay is less than at any time in the history of space exploration. Cosmic rays will be copious in the solar system. This won't matter much for people on or near Earth, because our planet's magnetic field (which extends well above where astronauts, cosmonauts and taikonauts work) resists most of the cosmic rays, and the thick blanket of atmosphere stops the rest. Ceres, like most residents of the solar system, does not have such protections. Thanks to the combination of the forecast of uniquely bright cosmic rays and the latest technology, 2018 will the best year so far in the history of solar system exploration to measure gamma rays or neutrons. Flying so close to the ground, Dawn should get superb readings.

In a future Dawn Journal we will discuss more of the specific objectives for the measurements and what they may reveal about Ceres, but now let's not forget about Dawn's other sensors. What about photography, infrared spectroscopy, visible spectroscopy, and gravity measurements?

We can look forward to some remarkable pictures. Some will be sharper than the best so far, but not by as much as you might expect. When it is in the low altitude segment of its orbit, Dawn will be moving faster than ever at Ceres. If you were in a plane traveling hundreds of miles (kilometers) per hour, it would not be hard to take a picture of the ground six miles (10 kilometers) beneath you. But if you were in a car driving at that speed or even faster, despite being closer to the ground, your pictures might not be better. (That wouldn't be the greatest of your worries, but the Dawn team is devoting a great deal of work to ensuring the ship's safety, as we'll discuss below.) The situation on Dawn isn't that severe, so the photography certainly will improve somewhat on what we already have.

Because the camera's field of view is so small and the hydrazine imposes such a stubborn limitation on Dawn's lifetime, we will see only a very small fraction of the dwarf planet's vast landscape with the improved clarity of low altitude.

In previous Dawn Journals (see, for example, this one), we have delved into details of how difficult it can be to predict the orbit with great accuracy. The dominant (but not exclusive) cause is that every time the hydrazine jets fire, whether to maintain a stable orientation or to turn (including to keep the sensors pointed at Ceres while Dawn swoops by in its elliptical orbit), they push the probe a little and so distort its orbit slightly. Predicting the subtleties of the changes in the spacecraft's orbit is a very complex problem. Although the outcome is not yet clear, the flight team is making progress in investigating methods to manage these orbital perturbations well enough to be able to have some control over where GRaND measures the atomic composition, because its gamma ray spectrometer and neutron spectrometer have broad views. They can tolerate the deviations in the orbit. But Dawn probably will not have the capability to capture any specific targets with its other spectrometers or cameras. Rather, controllers will take pictures of whatever terrain happens to be in view of the cameras. But on a world with as much fascinating diversity as Ceres, intriguing new details are likely to be discovered.

Along with studying the potential for improvements in pictures and spectra, the team is investigating refinements in Ceres' gravity field. They have already measured the gravity much more accurately than expected before Dawn arrived. Whether flying very close to some regions will allow them to improve their determination of the structure deep underground is the subject of ongoing work.

We will see in a Dawn Journal in a few months that the team will try to use certain properties of the orbit besides low altitude to provide attractive scientific opportunities. Nevertheless, it is clear that some goals simply will not be possible to achieve. To accomplish other objectives that are not feasible in that low ellipse, the team is analyzing the merits of pausing the ion-propelled spiral descent for a few weeks before reaching the final orbit. This could allow the spacecraft to view some regions of Ceres with the illumination of southern hemisphere summer, as we described in the previous Dawn Journal.

To ensure our distant ship remains ready to undertake extensive new observations, the infrared spectrometer, visible spectrometer, primary camera and backup camera each will be activated in January and run through their standard health checks and calibrations. For many of the observations in 2018, the two cameras will be used simultaneously to take as many pictures as possible, just as they were for special observations in 2017. Prior to this year, Dawn never used them concurrently.

With the help of a team of dedicated controllers, Dawn has shown itself to be a fantastically capable and resourceful explorer. Many new questions have to be answered and many challenges overcome for it to undertake another (and final) year in its bold expedition. But we can be hopeful that the creativity, ingenuity, and passion for knowledge and adventure that have propelled Dawn so very far already will soon allow it to add rich new details to what is already a celestial masterpiece.