Weighing just about 4 pounds (1.8 kilograms) on Earth but only 1.5 pounds (0.68 kilograms) on Mars, NASAâs Ingenuity Mars Helicopter is a small, autonomous rotorcraft designed to test â for the first time â powered, controlled flight in the thin Martian atmosphere. Ingenuityâs mission is a purely experimental flight test. If even only one test flight is achieved, it will provide NASA with a wealth of data and operational experience that can be applied to future aircraft designs for other worlds.

Because Ingenuity is a technology demonstration, there is no requirement to collect science data and there are no science instruments onboard. Instead, the helicopter carries a combination of custom-made and off-the-shelf components â many from the world of cell phone technology â including two cameras. These components are optimized for flight testing along with relaying engineering data and some imagery back to Earth. 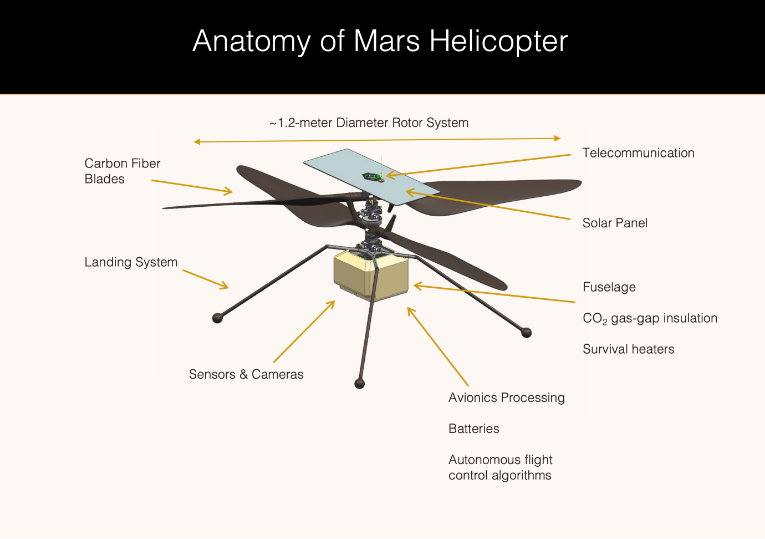 Ingenuityâs fuselage is just 5.4 inches by 7.7 inches by 6.4 inches (13.6 centimeters by 19.5 centimeters by 16.3 centimeters) â about the size of a tissue box. Engineers have packed this tiny space with computers, batteries, sensors, heaters, and telecommunications hardware. Four carbon composite landing legs, each about 1.26 feet (0.384 meters) long, give the helicopter 5.1 inches (0.13 meters) of clearance above a level surface. 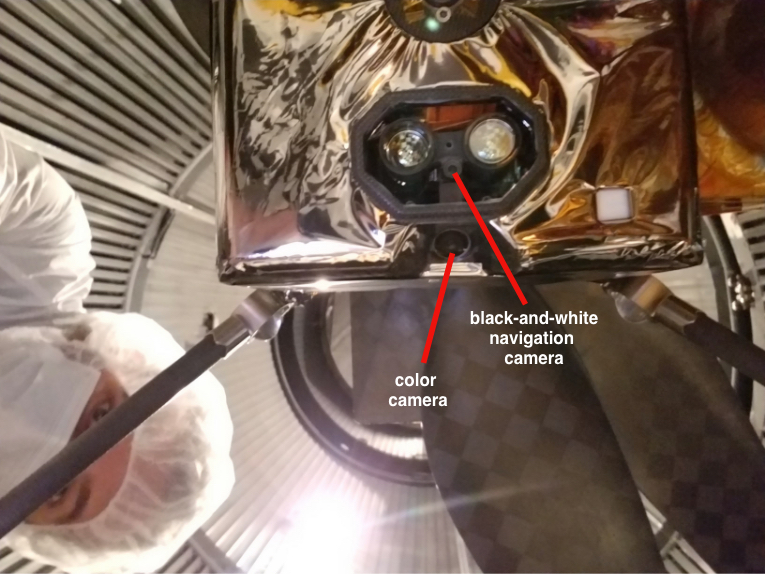 To touchdown in Jezero Crater and perform successful flight operations there, Ingenuity will rely on the Perseverance rover and other major Mars 2020 spacecraft components.

Perseverance Rover
The size of a small SUV, Perseverance will explore Jezero Crater, collecting and caching the first samples from another planet for future return to Earth. Ingenuity will remain attached to Perseveranceâs belly, encapsulated in a protective debris shield, until it is deployed for flight tests. During interplanetary cruise, landing, and early surface operations, Ingenuity will rely on the rover for electrical power and communications. Once Ingenuity is deployed on the surface, the rover will act as a communications relay between the helicopter and Earth, and also will document the flight tests with its onboard cameras. 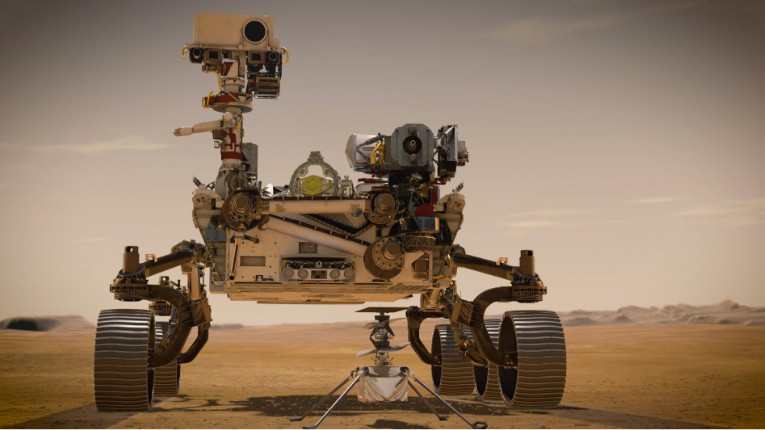 Designed collaboratively by Lockheed Martin Space in Denver, and the Mars 2020 and Mars Helicopter teams at NASAâs Jet Propulsion Laboratory, the Mars Helicopter Delivery System attaches Ingenuity to the belly of the rover during the journey to the Red Planet, landing, and early surface operation. A debris shield encapsulates and protects the helicopter and delivery system from rocks that could be kicked up during landing. The debris shield will remain in place until just days before Ingenuity is deployed to the surface. About 60 days after landing, the delivery system will deploy the helicopter, rotating and dropping it 5 inches (13 centimeters) or so (depending on surface variations) onto the Martian surface. After its job is complete (and Ingenuity is deployed), the delivery system will remain attached to the belly of Perseverance for the remainder of the roverâs mission. 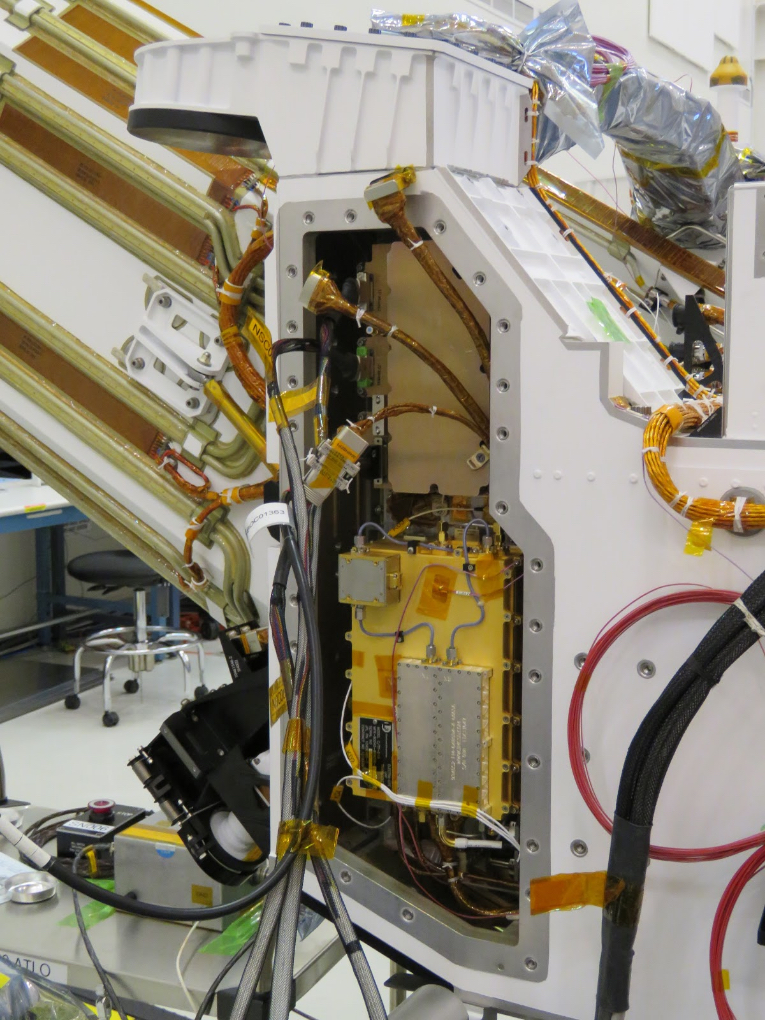 The Mars Helicopter Base Station, an electronics box installed in the Perseverance rover, carries the computers that monitor and regulate helicopter systems while it is attached to the rover and the communications gear that â after the helicopterâs deployment to the surface â stores and routes communications between Ingenuity, Perseverance, and Earth. 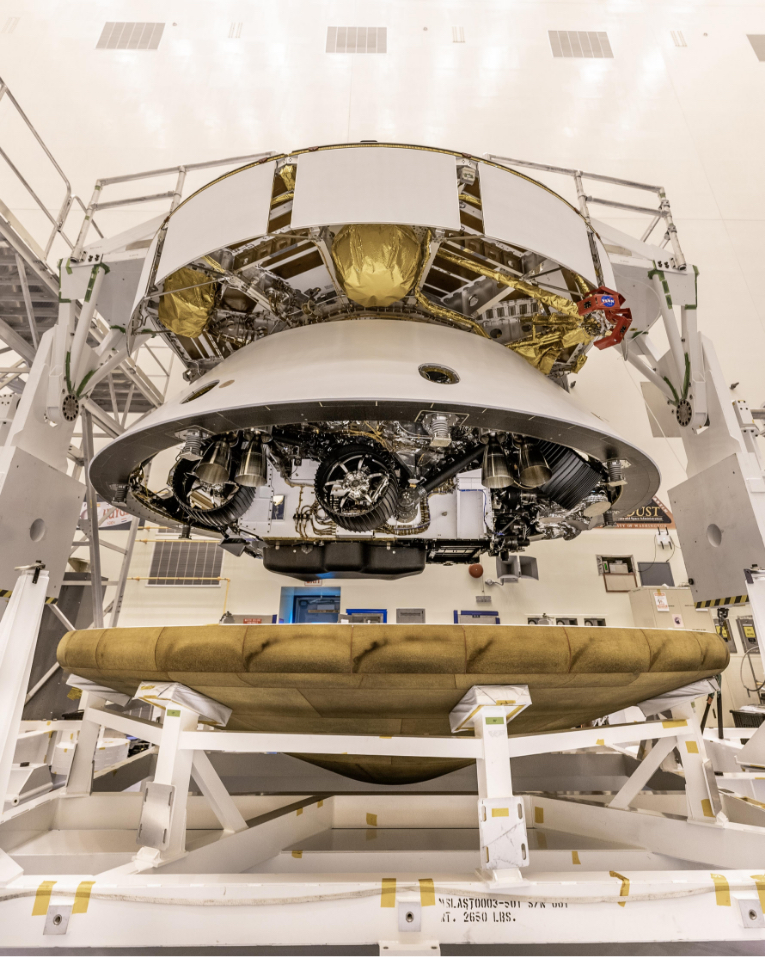 Both the Perseverance rover and the Mars Helicopter depend upon the missionâs cruise stage, aeroshell, and descent stage to successfully navigate between Earth and Mars, and to safely land on the Red Planet.

Ingenuity is powered by a six lithium-ion battery system that is recharged daily by a solar array located atop its rotor system. Solar cells in the array are optimized for the solar spectrum encountered at Mars, and the stored energy is used to operate heaters for the cold Martian nights as well as power the helicopter during flight operations. Power expended by the helicopter during an up-to-90-second flight is about 350 watts.

Telecommunications: How Ingenuity Talks to Earth

Communications between mission controllers back at JPL in Southern California and the Mars Helicopter are relayed by a string of assets. The antennas of NASAâs Deep Space Network send commands and other data from Earth directly to the Perseverance rover or to Mars orbiters that then relay those transmissions to Perseverance. Perseveranceâs main computer relays the commands and data to the Helicopter Base Station on the rover, which then transmits them to the helicopter. Conversely, the basestation collects transmissions from the helicopter, stores them, and routes the data through the roverâs main computer on a similar path back to the orbiters or occasionally, straight back to Earth.

Ingenuity and the base station use a UHF telecom link (900 MHz) to communicate with each other. The system can relay data at up to 250 kilobytes per second over distances of up to 3,300 feet (1,000 meters). During flights, a one-way data stream will be sent in real time from the helicopter to the rover for storage and subsequent retransmission to Earth. After landing, the helicopter will re-transmit the inflight data stream and additional data from the flight.

For more information on how Perseverance communicates with Earth, read the Telecommunications section of the roverâs press kit.

The United States has obligations under the international 1967 Outer Space Treaty to explore space in a manner that avoids the harmful contamination of celestial bodies and also any adverse effects to Earthâs environment resulting from any return of extraterrestrial matter. To help meet these obligations, NASAâs Planetary Protection Office draws up cleanliness standards known as planetary protection requirements. These requirements call for missions to take precautions to limit the amount of Earth-sourced biological material carried by NASA robotic spacecraft that travel to Mars. Flight hardware for the Mars 2020 Perseverance mission and the Ingenuity Mars Helicopter have been designed and built to meet NASA planetary protection requirements. NASAâs primary strategy for limiting Earth-based contamination of Mars is to be sure that all hardware going to the planet is biologically clean.

To meet these cleanliness standards, engineers assembled the rover, the helicopter and other parts of the spacecraft in âclean rooms.â This type of room has powerful air filters that limit dust particles, and its surfaces and floors are frequently treated with strong cleaning solutions to kill and remove living microbes. Mission hardware is cleaned using techniques that have proven effective on many previous missions and are designed not to damage the spacecraft.

At launch, the entire payload going to Mars (the Perseverance rover, the Ingenuity Mars Helicopter, and the cruise stage, aeroshell, and descent stage) will carry fewer than 500,000 bacterial spores (dormant forms of bacteria). This is a tiny number as far as spores go and wouldnât even cover a typical smartphone camera lens. Of this number, the parts of the Mars 2020 spacecraft intended to land on Mars â including the rover, helicopter, the parachute, and the descent stage â were mandated to have no more than 300,000 spores in total. The helicopter was allotted 33,000 spores and ended up with a count of 21,900.