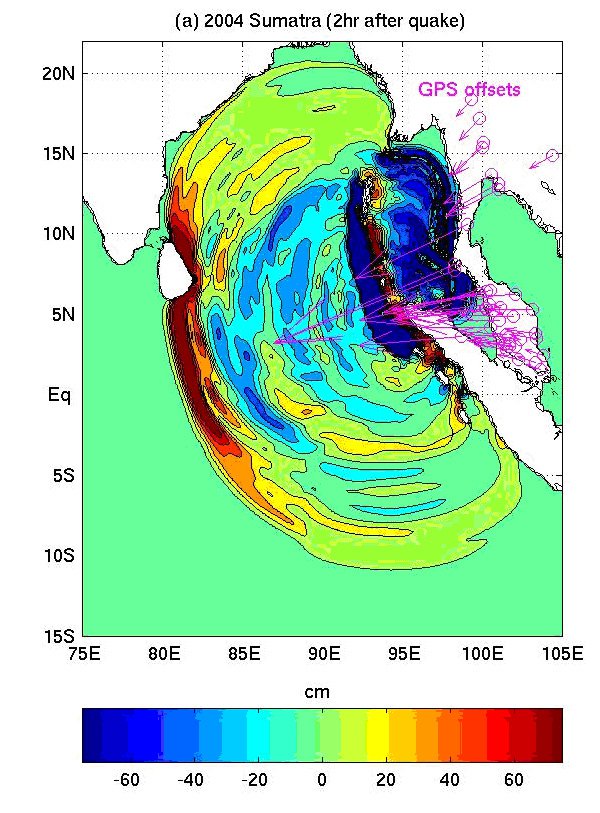 A wave of new NASA research on tsunamis may improve existing warning systems and proposes a potentially groundbreaking new theory.

PASADENA, Calif. – A wave of new NASA research on tsunamis has yielded an innovative method to improve existing tsunami warning systems, and a potentially groundbreaking new theory on the source of the December 2004 Indian Ocean tsunami.

Conventional tsunami warning systems rely on estimates of an earthquake's magnitude to determine whether a large tsunami will be generated. Earthquake magnitude is not always a reliable indicator of tsunami potential, however. The 2004 Indian Ocean quake generated a huge tsunami, while the 2005 Nias (Indonesia) quake did not, even though both had almost the same magnitude from initial estimates. Between 2005 and 2007, five false tsunami alarms were issued worldwide. Such alarms have negative societal and economic effects.

Song's method estimates the energy an undersea earthquake transfers to the ocean to generate a tsunami by using data from coastal GPS stations near the epicenter. With these data, ocean floor displacements caused by the earthquake can be inferred. Tsunamis typically originate at undersea boundaries of tectonic plates near the edges of continents.

"Tsunamis can travel as fast as jet planes, so rapid assessment following quakes is vital to mitigate their hazard," said Ichiro Fukumori, a JPL oceanographer not involved in the study. "Song and his colleagues have demonstrated that GPS technology can help improve both the speed and accuracy of such analyses."

Song's method works as follows: an earthquake's epicenter is located using seismometer data. GPS displacement data from stations near the epicenter are then gathered to derive seafloor motions. Based upon these data, local topography data and new theoretical developments, a new "tsunami scale" measurement from one to 10 is generated, much like the Richter Scale used for earthquakes. Song proposes using the scale to make a distinction between earthquakes capable of generating destructive tsunamis from those unlikely to do so.

To demonstrate his methodology on real earthquake-tsunamis, Song examined three historical tsunamis with well-documented ground motion measurements and tsunami observations: Alaska in 1964; the Indian Ocean in 2004; and Nias Island, Indonesia in 2005. His method successfully replicated all three. The data compared favorably with conventional seismic solutions that usually take hours or days to calculate.

Song said many coastal GPS stations are already in operation, measuring ground motions near earthquake faults in real time once every few seconds. "A coastal GPS network established and combined with the existing International GPS Service global sites could provide a more reliable global tsunami warning system than those available today," he said.

The theory behind the GPS study was published in the December 20 issue of Ocean Modelling. Song and his team from JPL; the California Institute of Technology, Pasadena, Calif.; University of California, Santa Barbara; and Ohio State University, Columbus, Ohio, theorized most of the height and energy generated by the 2004 Indian Ocean tsunami resulted from horizontal, not vertical, faulting motions. The study uses a 3-D earthquake-tsunami model based on seismograph and GPS data to explain how the fault's horizontal motions might be the major cause of the tsunami's genesis.

Scientists have long believed tsunamis form from vertical deformation of seafloor during undersea earthquakes. However, seismograph and GPS data show such deformation from the 2004 Sumatra earthquake was too small to generate the powerful tsunami that ensued. Song's team found horizontal forces were responsible for two-thirds of the tsunami's height, as observed by three satellites (NASA's Jason, the U.S. Navy's Geosat Follow-on and the European Space Agency's Environmental Satellite), and generated five times more energy than the earthquake's vertical displacements. The horizontal forces also best explain the way the tsunami spread out across the Indian Ocean. The same mechanism was also found to explain the data observed from the 2005 Nias earthquake and tsunami.

Co-author C.K. Shum of Ohio State University said the study suggests horizontal faulting motions play a much more important role in tsunami generation than previously believed. "If this is found to be true for other tsunamis, we may have to revise some early views on how tsunamis are formed and where mega tsunamis are likely to happen in the future," he said.