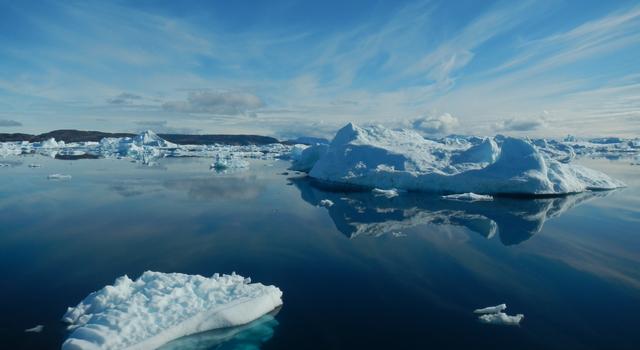 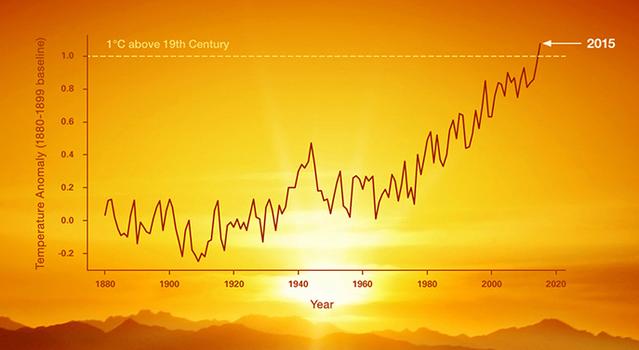 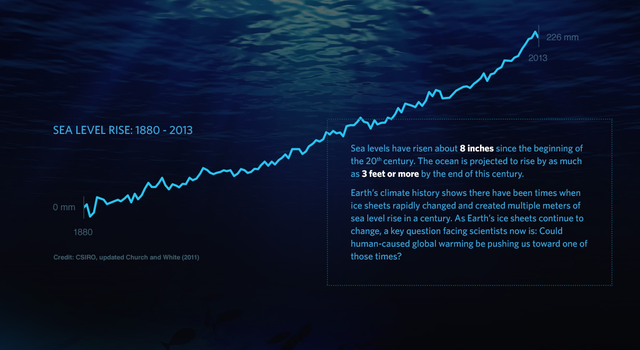 Using a variety of methods, scientists have concluded that global sea level â the average height of the sea surface across the planet â has varied substantially throughout history, especially in response to the ice ages. In recent history, starting around 7,000 years ago, sea level became quite steady, but over the last century, itâs been rising. Global tide measurements from tide gauges suggest the global sea level rose approximately 3.4 millimeters (0.13 inches) per year over the past century. The New York City area, alone, has experienced roughly a foot of sea-level rise in the past century. (Thatâs measured at a tide gauge near Battery Park just off the southern tip of Manhattan. While tide gauges are one way we measure sea level, changes in global sea level should not be confused with tides. Tides are the regular rise and fall of the sea surface and make it appear as if the water level of the ocean is always changing. But tides represent normal changes in the sea level that we expect to see daily and monthly.)

How do we know sea level is rising? Sea level is measured by monitoring stations on the shoreline and at sea. Satellites also collect data on the height of the sea level. There are more than 120 sea-level monitoring stations in the US and 240 additional stations worldwide. By looking at data from these stations over periods of 30 years or more, trends can be identified at individual stations and compared with other stations. This gives scientists useful information about local conditions. Those data can also be used to calculate the global average sea level and study it over time, giving scientists a picture of whatâs happening to the ocean on a planet-wide scale. Sea level has been measured at some stations for more than a century, providing data about sea level going back to 1880.

Itâs important to note that when sea level rises, the total amount of water on Earth isn't increasing. Instead, the volume of liquid that fills the ocean basins is growing, raising the elevation of the sea's surface and spilling ocean water onto low-lying land. The extra volume of seawater comes from two places:

So global sea level is currently rising as a result of both ocean thermal expansion and glacier melt, with each accounting for about half of the observed sea-level rise, and each caused by recent increases in global mean temperature. From 1961 to 2003, sea level rose due to thermal expansion and glacier melt (small glaciers, ice caps, ice sheets) at a rate of 1.11 millimeters (0.04 inches) per year2. Between 1993 and 2003, the contribution to sea-level rise increased for both sources to 2.79 millimeters (0.11 inches) per year (IPCC AR4 WG1, 2007). So, not only is sea level rising, but also it is rising at a faster rate than in the past. Currently, it is rising at a rate of over three millimeters per year.


The second column is the Global Mean Sea Level (GMSL) in millimeters, compared with the average level in 1990.

In addition to causing sea-level rise, the increase in global temperatures linked to higher CO2 concentrations leads to more heat waves and greater area affected by drought. We also see an increase in heavy precipitation events and flooding on land. Warm surface waters can damage coral reefs, reducing opportunities for fishing and tourism, and leave coasts vulnerable to storm surges and erosion.

How can you make a difference? Calculate your carbon footprint to find out just how much carbon youâre contributing to the environment. Then, create a plan of action to reduce your impact.