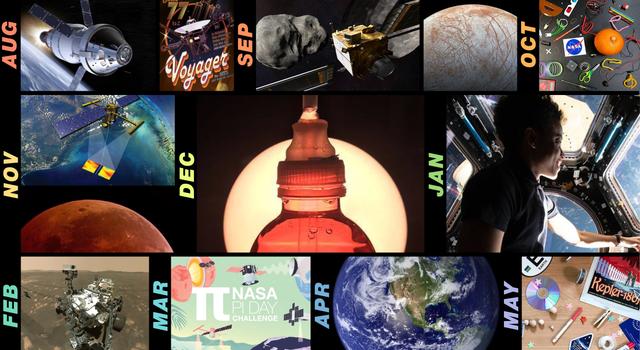 Just a few days later, on September 29, the Juno spacecraft that had been orbiting Jupiter since 2016 captured the closest views of Jupiterâs moon Europa in more than 20 years. The ice-covered moon is thought to contain a subsurface liquid-water ocean, making it an exciting new frontier in our search for life beyond Earth. NASA's Europa Clipper mission, which is scheduled to launch in 2024 is designed to study the moon in more detail. But until Europa Clipper arrives at the Jovian system in 2030, these observations from Juno are our best chance to get a closer look at this fascinating moon.

Look up in the early morning hours of November 8 to watch one of the most stunning spectacles visible from Earth: a total lunar eclipse. This one will be viewable in North and South America, as well as Asia and Australia.

Learn more about lunar eclipses and how to watch them from our Teachable Moments series. Then, get students of all ages outside and observing the Moon with lessons on moon phases and the hows and whys of eclipses. Students can even build a Moon calendar so they always know when and where to look for the next eclipse.

NASA is making plans to send astronauts back to the Moon for the first time since 1972 â this time to establish a sustainable presence and prepare for future human missions to Mars. The first major step is Artemis I, which is testing three key components required to send astronauts beyond the Moon: the Orion spacecraft, the Space Launch System, or SLS, rocket and the ground systems at Kennedy Space Center in Florida. The uncrewed Artemis I mission marks the first test of all three components at once.

As crucial as water is to human life, did you know that no one has ever completed a global survey of Earthâs surface water? That is about to change with the launch of the SWOT mission, scheduled for December 15. SWOT, which stands for Surface Water Ocean Topography, will use a state-of-the-art radar to measure the elevation of water in major lakes, rivers, wetlands, and reservoirs. It will also provide an unprecedented level of detail on the ocean surface. This data will help scientists track how these bodies of water are changing over time and improve weather and climate models.

Engage your students in learning about Earthâs water budget and how we monitor Earth from space with these lessons. And be sure to check out our Teachable Moments article for more about the SWOT mission and the science of our changing climate.