It only happens about 13 times a century and wonât happen again until 2032, so donât miss the transit of Mercury on Monday, Nov. 11! A transit happens when a planet crosses in front of a star. From our perspective on Earth, we only ever see two planets transit the Sun: Mercury and Venus. This is because these are the only planets between us and the Sun. (Transits of Venus are especially rare. The next one wonât happen until 2117.) During the upcoming transit of Mercury, viewers around Earth (using the proper safety equipment) will be able to see a tiny dark spot moving slowly across the disk of the Sun.

Read on to learn how transits contributed to past scientific discoveries and for a look at how scientists use them today. Plus, find resources for engaging students in this rare celestial event!

In the early 1600s, Johannes Kepler discovered that both Mercury and Venus would transit the Sun in 1631. It was fortunate timing: The telescope had been invented just 23 years earlier, and the transits of both planets wouldnât happen in the same year again until 13425. Kepler didnât survive to see the transits, but French astronomer Pierre Gassendi became the first person to see the transit of Mercury. Poor weather kept other astronomers in Europe from seeing it. (Gassendi attempted to view the transit of Venus the following month, but inaccurate astronomical data led him to mistakenly believe it would be visible from his location.) It was soon understood that transits could be used as an opportunity to measure apparent diameter â how large a planet appears from Earth â with great accuracy. 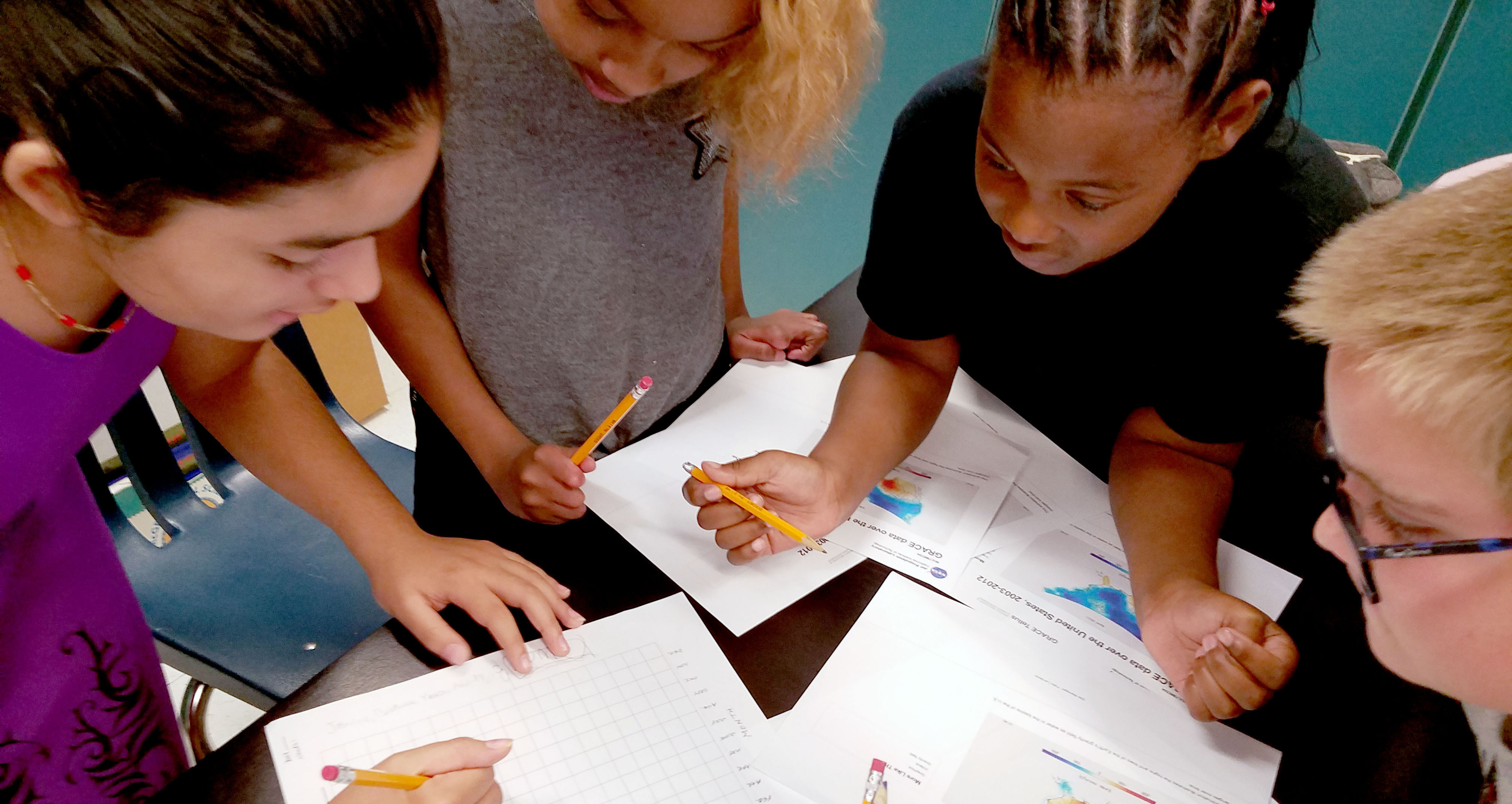 Bring the wonder of space to your students. Explore our collection of standards-aligned lessons featuring NASA missions and science.

After observing the transit of Mercury in 1677, Edmond Halley predicted that transits could be used to accurately measure the distance between the Sun and Earth, which wasnât known at the time. This could be done by having observers at distant points on Earth look at the variation in a planetâs apparent position against the disk of the Sun â a phenomenon known as parallax shift. This phenomenon is what makes nearby objects appear to shift more than distant objects when you look out the window of a car, for example.

Today, radar is used to measure the distance between Earth and the Sun with greater precision than transit observations. But the transits of Mercury and Venus still provide scientists with opportunities for scientific investigation in two important areas: exospheres and exoplanets.

Some objects, like the Moon and Mercury, were originally thought to have no atmosphere. But scientists have discovered that these bodies are actually surrounded by an ultrathin atmosphere of gases called an exosphere. Scientists want to better understand the composition and density of the gases in Mercuryâs exosphere, and transits make that possible.

âWhen Mercury is in front of the Sun, we can study the exosphere close to the planet,â said NASA scientist Rosemary Killen. âSodium in the exosphere absorbs and re-emits a yellow-orange color from sunlight, and by measuring that absorption, we can learn about the density of gas there.â

When Mercury transits the Sun, it causes a slight dip in the Sunâs brightness as it blocks a tiny portion of the Sunâs light. Scientists discovered they could use that phenomenon to search for planets orbiting distant stars. These planets, called exoplanets, are otherwise obscured from view by the light of their star. When measuring the brightness of far-off stars, a slight recurring dip in the light curve (a graph of light intensity) could indicate an exoplanet orbiting and transiting its star. NASAâs Kepler space telescope found more than 2,700 exoplanets by looking for this telltale drop in brightness. NASAâs TESS mission is surveying 200,000 of the brightest stars near our solar system and is expected to potentially discover more than 10,000 transiting exoplanets.

This animation shows one method scientists use to hunt for planets outside our solar system. When exoplanets transit their parent star, we can detect the dip in the starâs brightness using space telescopes. Credit: NASA/JPL-Caltech | + Expand image

Additionally, scientists have been exploring the atmospheres of exoplanets. Similarly to how we study Mercuryâs exosphere, scientists can observe the spectra â a measure of light intensity and wavelength â that passes through an exoplanetâs atmosphere. As a result, theyâre beginning to understand the evolution and composition of exoplanet atmospheres, as well as the influence of stellar wind and magnetic fields. 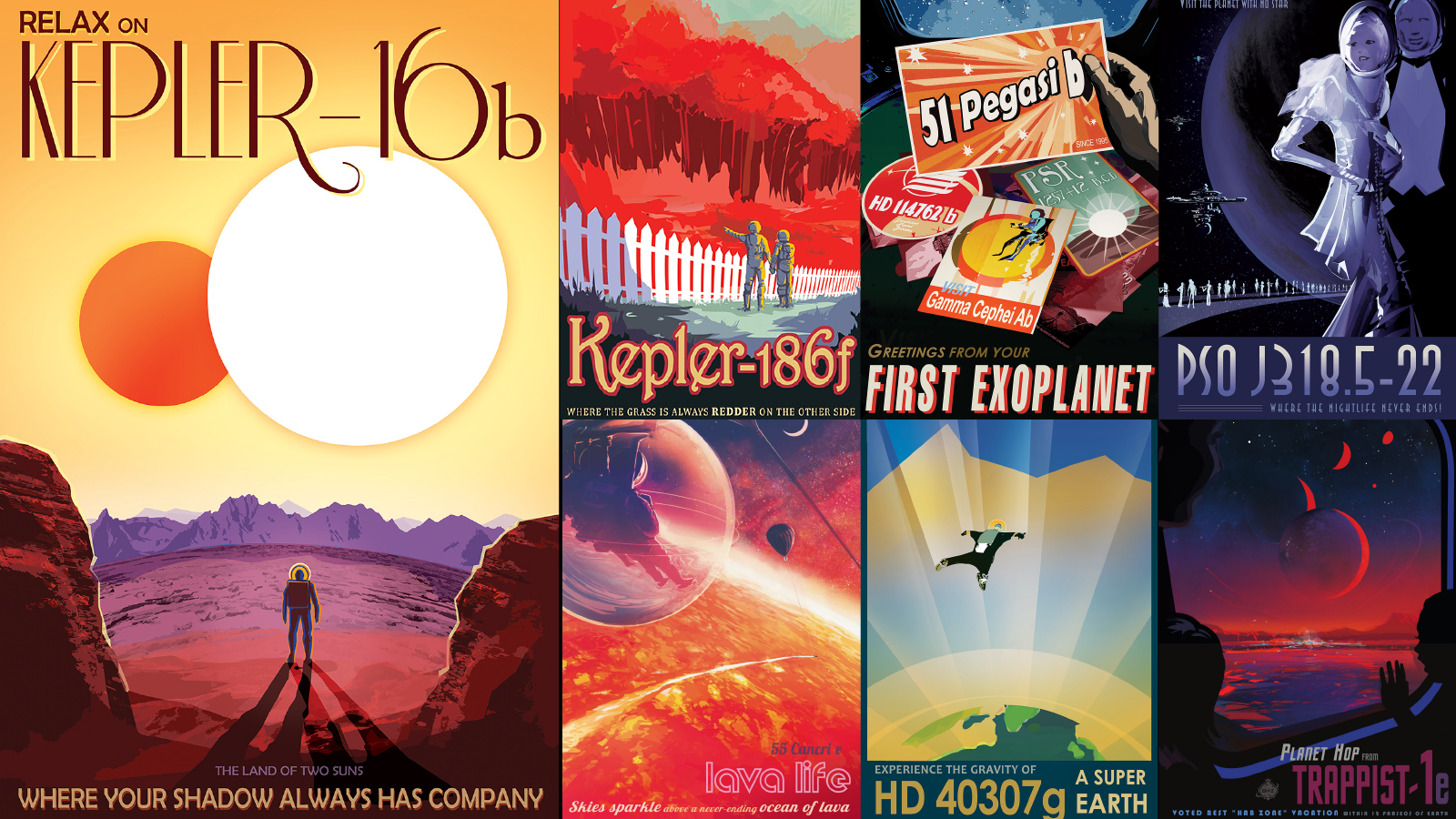 Using the transit method and other techniques, scientists are learning more and more about planets beyond our solar system. These discoveries have even inspired a series of posters created by artists at NASA, who imagine what future explorers might encounter on these faraway worlds. Credit: NASA | âº Download posters

During the transit of Mercury, the planet will appear as a tiny dot on the Sunâs surface. To see it, youâll need a telescope or binoculars outfitted with a special solar filter.

WARNING! Looking at the Sun directly or through a telescope without proper protection can lead to serious and permanent vision damage. Do not look directly at the Sun without a certified solar filter.

The transit of Mercury will be partly or fully visible across much of the globe. However, it wonât be visible from Australia or most of Asia and Alaska. 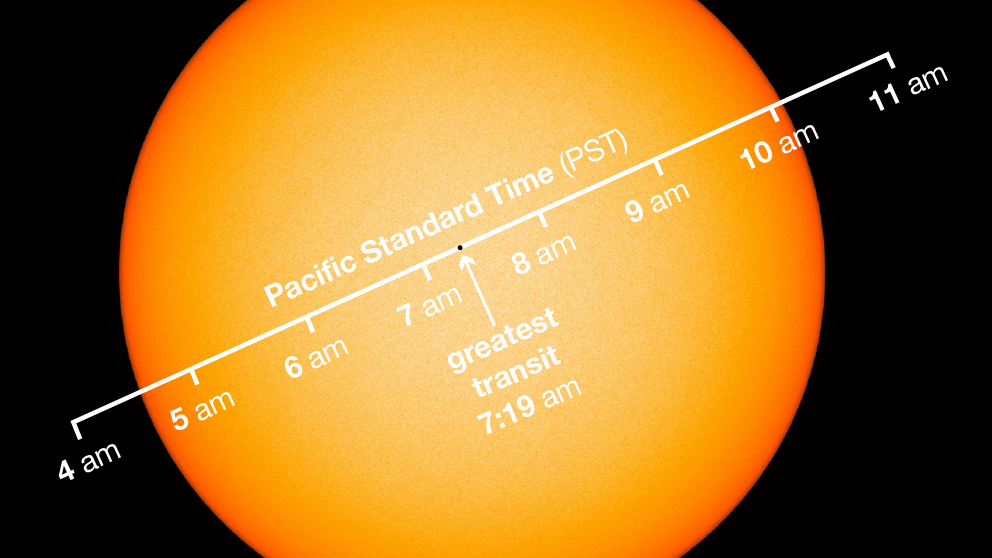 Mercuryâs trek across the Sun begins at 4:35 a.m. PST (7:35 a.m. EST), meaning viewers on the East Coast of the U.S. can experience the entire event, as the Sun will have already risen before the transit begins. By the time the Sun rises on the West Coast, Mercury will have been transiting the Sun for nearly two hours. Fortunately, the planet will take almost 5.5 hours to completely cross the face of the Sun, so there will be plenty of time for West Coast viewers to witness this event. See the transit map below to learn when and where the transit will be visible. 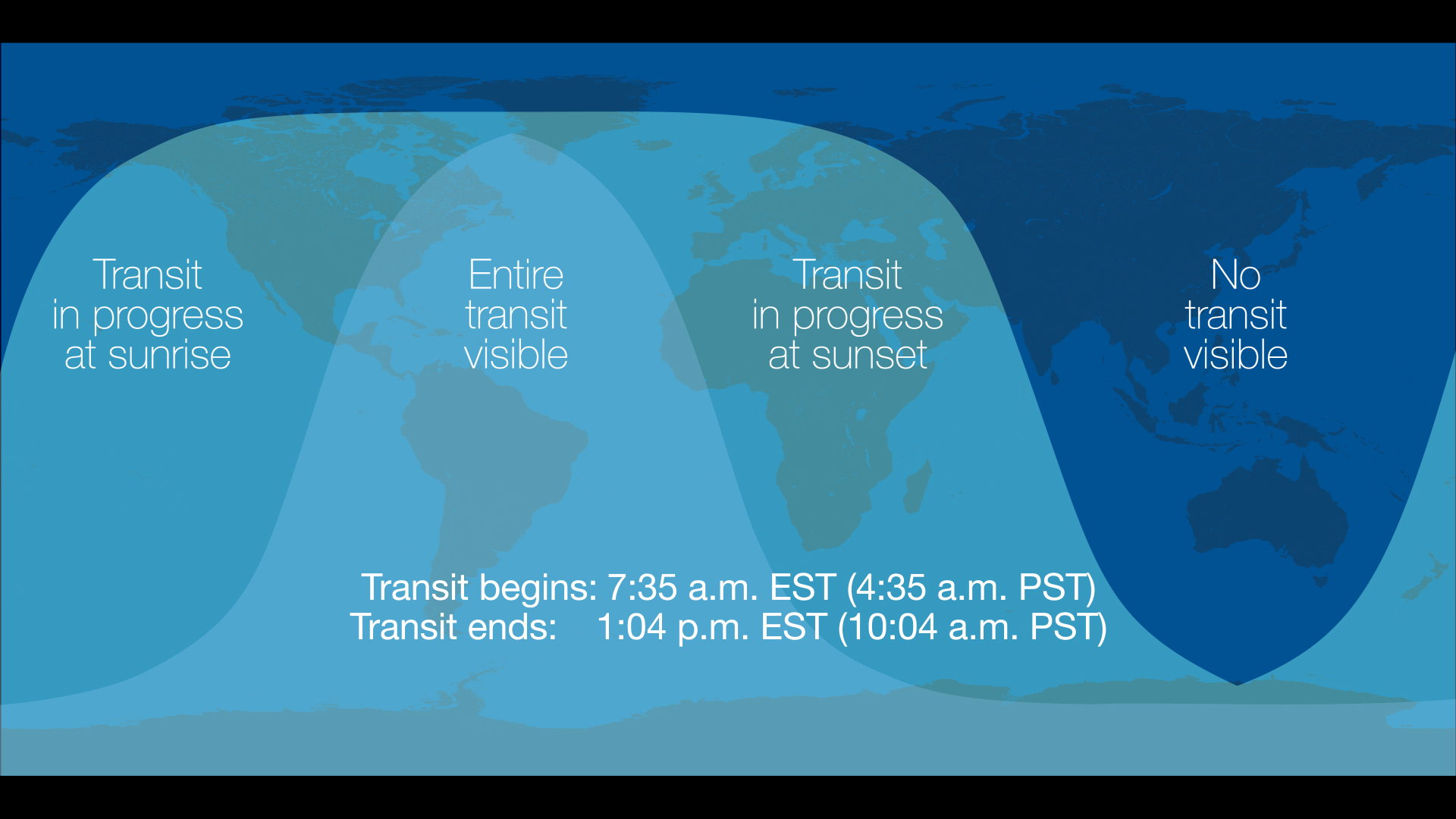 This map shows where and when the transit will be visible on November 11. Image credit: NASA/JPL-Caltech | + Expand image

Donât have access to a telescope or binoculars with a solar filter? Visit the Night Sky Network website to find events near you where amateur astronomers will have viewing opportunities available.

During the transit, NASA will share near-real-time images of the Sun directly from the Solar Dynamics Observatory. Beginning at 4:41 a.m. PST (7:41 a.m. EST) you can see images of Mercury passing in front of the Sun at NASAâs 2019 Mercury Transit page, with updates through the end of the transit at 10:04 a.m. PST (1:04 p.m. EST).

If youâre in the U.S., donât miss the show, as this is the last time a transit will be visible from the continental United States until 2049!

Watch this month's installment of "What's Up" to learn more about how to watch the Nov. 11 transit of Mercury. Credit: NASA/JPL-Caltech | Watch on YouTube

Use these lessons and activities to engage students in the transit of Mercury and the hunt for planets beyond our solar system: