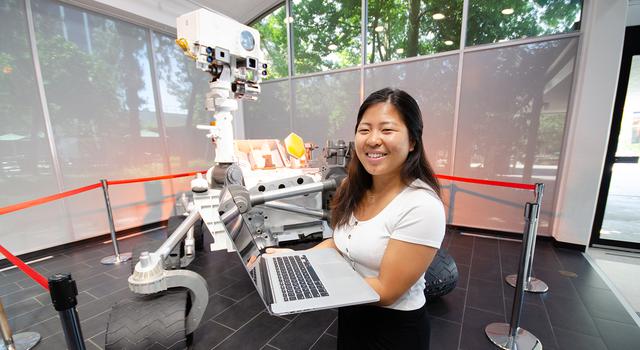 To remotely operate NASA's next Mars rover on a planet millions of miles away, mission team members will need to carefully plan out every drive, head swivel and arm extension before sending their coded commands to the vehicle. A wrong move could jeopardize the mission and, at the least, eat into the rover's precious energy supply. So this past summer, it was intern Vivian Li's task to design a web tool that will let mission operators ensure they're sending all the right moves to Mars. The internship at NASA's Jet Propulsion Laboratory gave Li, an information and computer science major at Cornell University, a chance to bring her design skills to a team that's typically more focused on building interfaces for robots rather than for humans. We caught up with Li to learn how she's adding a human touch to robotic navigation on the Mars 2020 mission.

I'm working on a user interface for the Mars 2020 rover that takes in commands and produces a 3D simulation of the commands. So a rover driver could input what they want the rover to do â for example, drive 100 meters forward â and then, based on the terrain and all the other external factors, the program would take in the commands and simulate the path of the rover.

Is this something completely new for Mars 2020?

They've had the simulation software for a really long time. This is just a different way to package it and for people to be able to easily use it. The current version only runs on certain computers, so we're moving it to a web-based platform that can run on pretty much any modern browser.

I get in around 7:30 a.m., and at that time I just sort of warm up for the day in that I don't do anything that's super-taxing. I check my meetings and get set up. Then right after that, I jump into what I need to do. Right now, my primary project is creating the front end for the interface, writing a little bit of code and fixing bugs in the flight software simulation for Mars 2020.

If I'm not in meetings, I'll be writing code all day and doing a lot of planning. I'm in a different office than my team, so me and my co-intern will sometimes ask for help with our project, but it's a lot of independent work. It's great because my co-intern and I help each other a lot. Our mentors tell us what they want â like yesterday, they wanted us to incorporate a camera view into the simulation â then, we're the ones who figure out how to do it.

Pretty soon, we'll be going into user testing. There are a couple of people who would actually be using the technology who volunteered to test it out. Once they do, we can edit it based on how they feel about what we have right now.

What has been the most uniquely JPL or NASA experience that you've had so far?

Two things: First, just getting to stroll in and watch the Mars 2020 rover being built in the clean room. Second is meeting the people who work here. The people here all share a similar love of science and exploration research, which is really different from how a lot of computer science is oriented. All the engineers and even people who are in physics or communications share a common goal. I've learned so much from just talking to people and even other interns. It's been so cool, because I don't really get that exposure at school.

Explore a collection of standards-aligned lessons for students in grades 3-12 that bring together coding and space exploration.

What made you decide to study information and computer science?

I actually went into college studying biology and English. I had done a year of coding in my senior year of high school, so I knew a little bit of [the programming language] Python. When I got to college, I decided to study biology, and I kind of started orienting toward computational biology. I worked in a lab, and the people there told me, "If you have computer science skills, you can kind of go into any field you want." So I had this career crisis moment when I was like, "I don't want to study biology anymore," because I had been in a microbiology lab all summer and it was not very fun. I figured if I did computer information sciences, it would give me more time to decide.

Even though I know a lot of people here have a lot more experience than me and they started a lot younger, I feel like my skills are so much more adaptable now, and that is what made me stay in the major.

So you still wanted to have that science focus?

Yeah. I don't want to fully isolate myself from the thing that I wanted to study originally, because I still do love biology, just not the career path that goes with it.

What about the user-interface side? Is that something that you're interested in, or did you get thrown into it for your internship?

That's what's special about my major in computer information science: Not only are we technically-based, but also we're user-and-society-based. So for our core classes, we take communications, law, ethics and policy, and all that. Through all those classes, I learned just how important the user-interface side is and accessibility design, and just how much easier life gets if the engineer really understands the user. I think having a good understanding of society and technology is what we should all be focusing on.

Are you bringing some of that user focus to your work with the Mars 2020 mission?

With my mentors being more on the software side and my co-intern being more on the development side, I think my having the user-interface design skills is unique in a very technical workspace. For Mars 2020, even though I'm not working on the design of the rover or one of the software systems, being here allows me to reinforce that the users are still really important, and we want to make it as easy as possible for someone to understand the technology even though it's super-complex.

A year and a half ago, I went on a trip to Texas with my friend from school. She brought her friend from home, who brought his friend. The two of them had interned at JPL. They spent the entire week talking about JPL nonstop, on all of our hikes [laughs]. I had never met people who loved their work so much that they wanted to talk about it 24/7. That made me think that JPL must be a great workplace and somewhere that everyone is really passionate. Since then, I've just wanted to come here.

How do you feel you're contributing to the Mars 2020 mission and making it a success?

I feel like the work I am doing is really important. And because I'm bringing a unique skill set to my team, it makes me feel like I'm valued at JPL. I've also been working with other teams who might also want to use my software. Because of that, I think that this concept could be developed for other missions and be really useful in the future as well.

I don't know yet. I just really wanted to work at JPL this summer because I felt like I would get exposed to a lot more. I think now I'm more stressed, because I have seen so many things I want to do [laughs]. But I definitely want to be somewhere in the realm of tech and society. My overarching goal is that I want to have an ethical career, something that can help humanity. And I think JPL is doing that.

If you could play any role in NASA's plans to send humans to the Moon or on to Mars, what would it be?

I really enjoy the work I'm doing now and would love to continue doing that in the future. I don't think I personally want to be an astronaut. I want to stay on Earth for everything that this planet has to offer.