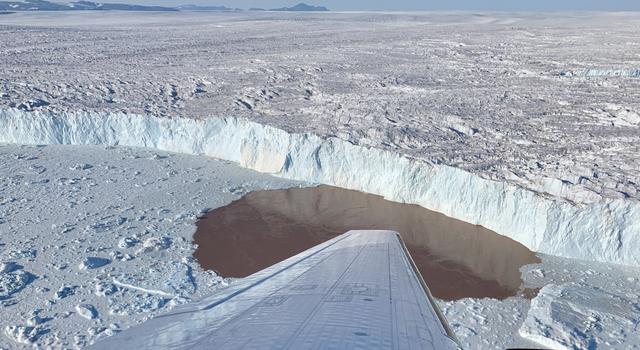 Explore how the OMG mission discovered more about what's behind one of the largest contributors to global sea level rise. Plus, learn what it means for communities around the world and how to get students engaged.

After six years investigating the effects of warming oceans on Greenland's ice sheet, the Oceans Melting Greenland, or OMG, mission has concluded. This airborne and seaborne mission studied how our oceans are warming and determined that ocean water is melting Greenlandâs glaciers as much as warm air is melting them from above.

Read on to learn more about how OMG accomplished its goals and the implications of what we learned. Then, explore educational resources to engage students in the science of this eye-opening mission.

Global sea level rise is one of the major environmental challenges of the 21st century. As oceans rise, water encroaches on land, affecting populations that live along shorelines. Around the world â including U.S. regions along the Gulf of Mexico and Eastern Seaboard and in Alaska â residents are feeling the impact of rising seas. Additionally, freshwater supplies are being threatened by encroaching saltwater from rising seas.

Sea level rise is mostly caused by melting land ice (primarily glaciers), which adds water to the ocean, as well as thermal expansion, the increase in volume that occurs when water heats up. Both ice melt and thermal expansion result from rising global average temperatures on land and in the sea â one facet of climate change.

This short video explains why Greenland's ice sheets are melting and what it means for our planet. Credit: NASA/JPL-Caltech | Watch more from the Earth Minute series

Greenlandâs melting glaciers contribute more freshwater to sea level rise than any other source, which is why the OMG mission set out to better understand the mechanisms behind this melting.

How We Did It

The OMG mission used a variety of instruments onboard airplanes and ships to map the ocean floor, measure the behemoth Greenland glaciers, and track nearby water temperature patterns.

This animation shows how the OMG mission created a map of the ocean floor, known as a bathymetric map, to determine the geometry around Greenland's glaciers. Image credit: NASA/JPL-Caltech | + Expand image

This animation shows how the OMG mission used radar to measure changes in the thickness and retreat of Greenland's glaciers as well as probes to measure ocean temperature and salinity. Credit: NASA/JPL-Caltech | + Expand image

Early on, the mission team created a map of the ocean floor, known as a bathymetric map, by combining multibeam sonar surveys taken from ships and gravity measurements taken from airplanes. Interactions among glaciers and warming seas are highly dependent on the geometry of the ocean floor. For example, continental shelf troughs carved by glaciers allow pathways for water to interact with glacial ice. So understanding Greenland's local bathymetry was crucial to OMG's mission.

To locate the edges of Greenland's glaciers and measure their heights, the mission used a radar instrument known as the Glacier and Ice Surface Topography Interferometer. Every spring during the six-year OMG mission, the radar was deployed on NASAâs Gulfstream III airplane that flew numerous paths over Greenlandâs more than 220 glaciers. Data from the instrument allowed scientists to determine how the thickness and area of the glaciers are changing over time.

Finally, to measure ocean temperature and salinity patterns, scientists deployed numerous cylindrical probes. These probes dropped from an airplane and fell through the water, taking measurements from the surface all the way to the ocean floor. Each probe relayed its information back to computers onboard the plane where ocean temperatures and salinity were mapped. Then, scientists took this data back to their laboratories and analyzed it for trends, determining temperature variations and circulation patterns.

Prior to the OMG mission, scientists knew that warming air melted glaciers from above, like an ice cube on a hot day. However, glaciers also flow toward the ocean and break off into icebergs in a process called calving. Scientists had the suspicion that warmer ocean waters were melting the glaciers from below, causing them to break off more icebergs and add to rising seas. It wasnât until they acquired the data from OMG, that they discovered the grim truth: Glaciers are melting from above and below, and warming oceans are having a significant effect on glacial melt.

This narrated animation shows warm ocean water is melting glaciers from below, causing their edges to break off in a process called calving. Credit: NASA | Watch on YouTube

What this means for our Earth's climate is that as we continue burning fossil fuels and contributing to greenhouse gas accumulation, the oceans, which store more than 90% of the heat that is trapped by greenhouse gases, will continue to warm, causing glaciers to melt faster than ever. As warming ocean water moves against glaciers, it eats away at their base, causing the ice above to break off. In other words, calving rates increase and sea level rises even faster.

Our oceans control our climate and affect our everyday lives, whether or not we live near them. With the pace of the melt increasing, our shorelines and nearby communities will be in trouble sooner than previously expected. And itâs not just the beaches that will be affected. If Greenlandâs glaciers all melt, global sea levels will rise by over 24 feet (7.4 meters), bringing dramatic change to the landscapes of major cities around the world.

âº Read more about OMGâs findings and how scientists are continuing their research through ongoing initiatives and projects.

Check out these resources to bring the real-life STEM behind the mission into your teaching. With lessons for educators and student projects, engage students in learning about the OMG mission and NASA climate science.