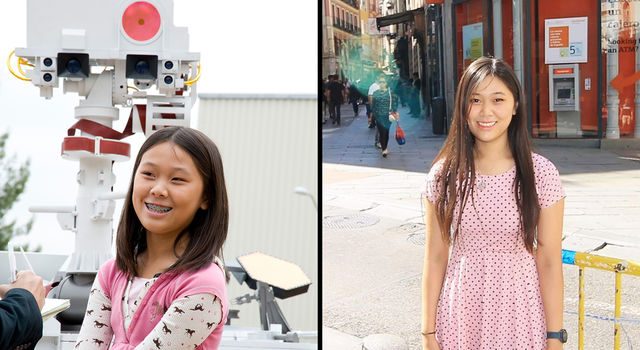 Students have just over one week more to enter NASAâs Name the Rover Essay Contest. While they put the finishing touches on their essays (due Nov. 1, 2019), meet the most recent naming contest winner, Clara Ma. Find out what Ma is up to more than 10 years after submitting her winning name for the Mars rover now known as Curiosity and why she says the experience changed her life.

NASA is inviting students to help name its next Mars rover! Set to launch from Florida in the summer of 2020, NASAâs fifth rover to visit the Red Planet is designed to study past environments capable of supporting life, seek signs of ancient microbial life, collect rock and soil samples for a possible future return to Earth, and test technologies that could produce oxygen from the Martian atmosphere for use by humans one day. But before it can do that, it needs a name.

Following in the tracks of NASAâs four previous Mars rovers, the agency is asking students to suggest a name. The first Mars rover, which landed in 1997, was called the Microrover Flight Experiment until a 12-year old student from Connecticut suggested the name Sojourner, in honor of abolitionist and womenâs rights activist Sojourner Truth. In 2004, a third-grade student from Arizona named NASAâs twin rovers Spirit and Opportunity. Curiosity, which landed in 2012 and is the most recent rover to visit Mars, was named by a sixth-grade student in Kansas.

To enter the Name the Rover Essay Contest, individual students must submit an essay of up to 150 words by Nov. 1, 2019. In their essay, students will need to propose the name they think best suits the rover and explain their reasoning. Judges will select three finalists (one each from grades K-4, 5-8 and 9-12) from every state and U.S. territory. From there, judges will narrow down the finalists further before they select a final name in the spring of 2020.

Explore standards-aligned lessons for students that get them exploring Mars science, robotics and more.

So what makes a good name? There are lots of ways to become inspired, but students should start by learning about the rover as well as the Red Planet and why we explore. But they shouldnât stop there. There are many ways to spark ideas from students, including writing planetary poetry, making cosmic art, and having them build rovers of their own. Get students thinking and writing creatively, and encourage them to submit their essay!

The contest is open to U.S. residents enrolled in kindergarten through 12th grade in a U.S. school (including U.S. territories and schools operated by the U.S. for the children of American personnel overseas). Home-school students can also submit a name!