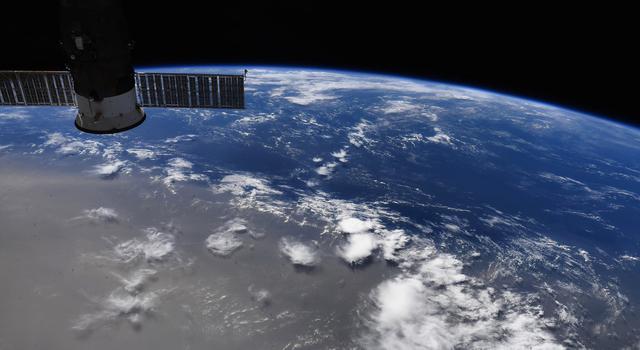 How NASA Plans to Dig Up the Dirt on Climate Change 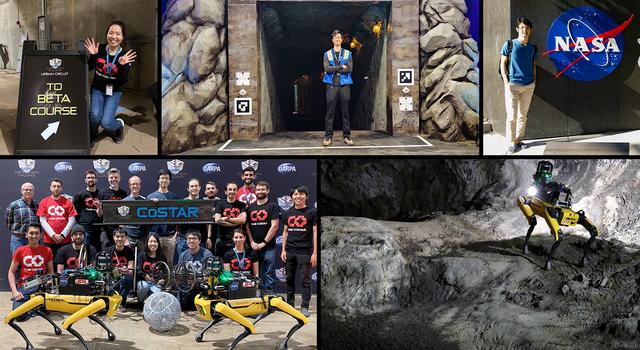 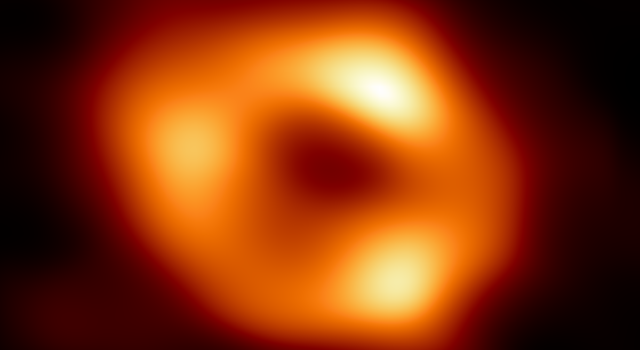 Find out how scientists captured the first image of Sagittarius A*, why it's important, and how to turn it into a learning opportunity for students.

Our home galaxy, the Milky Way, has a supermassive black hole at its center, but weâve never actually seen it â until now. The Event Horizon Telescope, funded by the National Science Foundation, has released the first image of our galactic black hole, Sagittarius A* (pronounced âSagittarius A-starâ and abbreviated Sgr A*).

Read on to find out how the image was acquired and learn more about black holes and Sagittarius A*. Then, explore resources to engage learners in the exciting topic of black holes.

A black hole is a location in space with a gravitational pull so strong that nothing, not even light, can escape it. A black holeâs outer edge, called its event horizon, defines the spherical boundary where the velocity needed to escape exceeds the speed of light. Matter and radiation fall in, but they canât get out. Because not even light can escape, a black hole is literally black. Contrary to their nameâs implication, black holes are not empty. In fact, a black hole contains a great amount of matter packed into a relatively small space. Black holes come in various sizes and can exist throughout space.

Stellar-mass black holes are found throughout our Milky Way galaxy and have masses less than about 100 times that of our Sun. They comprise one of the possible endpoints of the lives of high-mass stars. Stars are fueled by the nuclear fusion of hydrogen, which forms helium and other elements deep in their interiors. The outflow of energy from the central regions of the star provides the pressure necessary to keep the star from collapsing under its own weight.

This illustration shows a binary system containing a stellar-mass black hole called IGR J17091-3624. The strong gravity of the black hole, on the left, is pulling gas away from a companion star on the right. This gas forms a disk of hot gas around the black hole, and the wind is driven off this disk. Image credit: NASA/CXC/M.Weiss | âº Full image and caption

Once the fuel in the core of a high-mass star has completely burned out, the star collapses, sometimes producing a supernova explosion that releases an enormous amount of energy, detectable across the electromagnetic spectrum. If the starâs mass is more than about 25 times that of our Sun, a stellar-mass black hole can form.

This chart illustrates the relative masses of super-dense cosmic objects, ranging from white dwarfs to the supermassive black holes encased in the cores of most galaxies. | âº Full image and caption 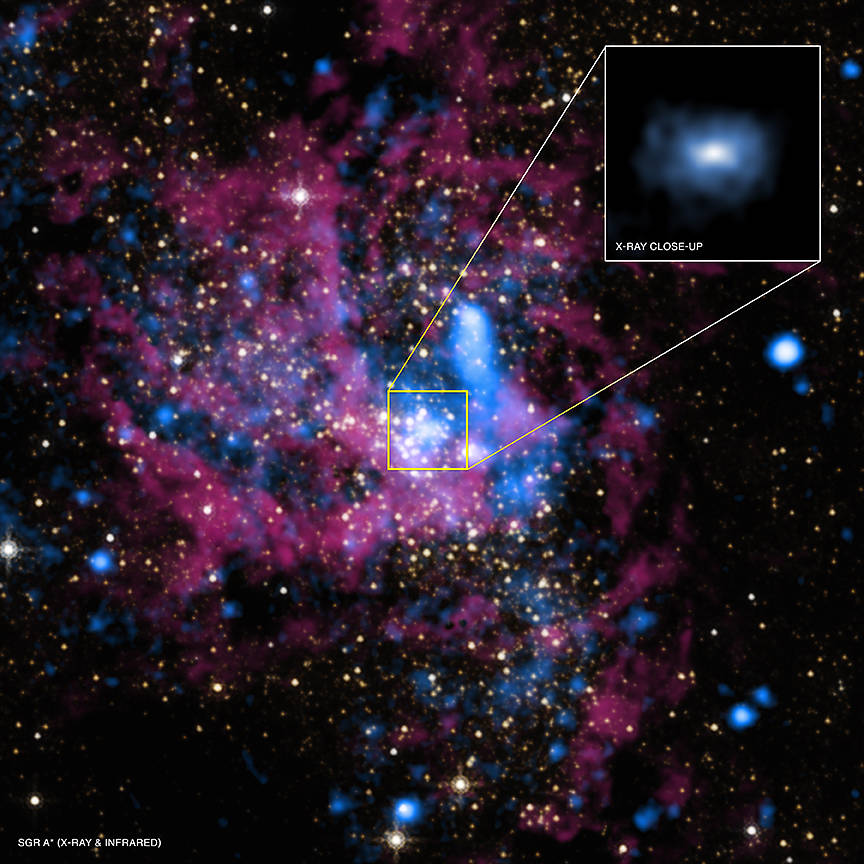 This image shows the center of the Milky Way galaxy along with a closer view of Sagittarius A*. It was made by combining X-ray images from NASA's Chandra X-ray Observatory (blue) and infrared images from the agency's Hubble Space Telescope (red and yellow). The inset shows Sgr A* in X-rays only, covering a region half a light year wide. Image credit: X-ray: NASA/UMass/D.Wang et al., IR: NASA/STScI | âº Full image and caption

Black holes hold allure for everyone from young children to professional astronomers. For astronomers, in particular, learning about Sagittarius A* is important because it provides insights into the formation of our galaxy and black holes themselves.

Understanding the physics of black hole formation and growth, as well as their surrounding environments, gives us a window into the evolution of galaxies. Though Sagittarius A* is more than 26,000 light years (152 quadrillion miles) away from Earth, it is our closest supermassive black hole. Its formation and physical processes influence our galaxy as galactic matter continually crosses the event horizon, growing the black holeâs mass.

How Scientists Imaged Sagittarius A*

Black holes, though invisible to the human eye, can be detected by observing their effects on nearby space and matter. As a result of their enormous mass, black holes have extremely high gravity, which pulls in surrounding material at rapid speeds, causing this material to become very hot and emit X-rays.

This video explains how Sagittarius A* appears to still have the remnants of a blowtorch-like jet dating back several thousand years. Credit: NASA | Watch on YouTube

X-ray-detecting telescopes such as NASAâs Chandra X-ray Observatory can image the material spiraling into a black hole, revealing the black holeâs location. NASAâs Hubble Space Telescope can measure the speed of the gas and stars orbiting a point in space that may be a black hole. Scientists use these measurements of speed to determine the mass of the black hole. Hubble and Chandra are also able to image the effects of gravitational lensing, or the bending of light that results from the gravitational pull of black holes or other high-mass objects such as galaxies. 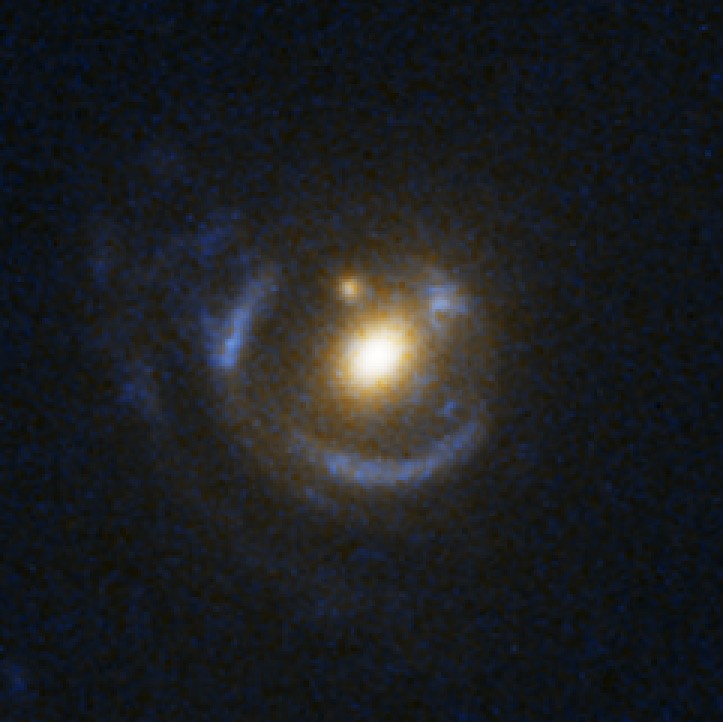 The thin blue bull's-eye patterns in this Hubble Space Telescope image are called "Einstein rings." The blobs are giant elliptical galaxies roughly 2 to 4 billion light-years away. And the bull's-eye patterns are created as the light from galaxies twice as far away is distorted into circular shapes by the gravity of the giant elliptical galaxies. | âº Full image and caption

To directly image the matter surrounding a black hole, thus revealing the silhouette of the black hole itself, scientists from around the world collaborated to create the Event Horizon Telescope. The Event Horizon Telescope harnesses the combined power of numerous telescopes around the world that can detect radio-wave emissions from the sky to create a virtual telescope the size of Earth.

Narrated by Caltechâs Katie Bouman, this video explains how she and her fellow teammates at the Event Horizon Telescope project managed to take a picture of Sagittarius A* (Sgr A*), a beastly black hole lying 27,000 light-years away at the heart of our Milky Way galaxy. Credit: Caltech | Watch on YouTube

In 2019, the team released the first image of a black hole's silhouette when they captured the glowing gasses surrounding the M87* galactic black hole nearly 53 million light-years (318 quintillion miles) away from Earth. The team then announced that one of their next endeavors was to image Sagittarius A*.

To make the newest observation, the Event Horizon Telescope focused its array of observing platforms on the center of the Milky Way. A telescope array is a group of telescopes arranged so that, as a set, they function similarly to one giant telescope. In addition to the telescopes used to acquire the M87* image, three additional radio telescopes joined the array to acquire the image of Sagittarius A*: the Greenland Telescope, the Kitt Peak 12-meter Telescope in Arizona, and the NOrthern Extended Millimeter Array, or NOEMA, in France.

This image of the center of our Milky Way galaxy representing an area roughly 400 light years across, has been translated into sound. Listen for the different instruments representing the data captured by the Chandra X-ray Observatory, Hubble Space Telescope, and Spitzer Space Telescope. The Hubble data outline energetic regions where stars are being born, while Spitzer's data captures glowing clouds of dust containing complex structures. X-rays from Chandra reveal gas heated to millions of degrees from stellar explosions and outflows from Sagittarius A*. Credit: Chandra X-ray Observatory | Watch on YouTube

The distance from the center of Sagittarius A* to its event horizon, a measurement known as the Schwarzschild radius, is enormous at seven million miles (12,000,000 kilometers or 0.08 astronomical units). But its apparent size when viewed from Earth is tiny because it is so far away. The apparent Schwarzschild radius for Sagittarius A* is 10 microarcseconds, about the angular size of a large blueberry on the Moon.

Acquiring a good image of a large object that appears tiny when viewed from Earth requires a telescope with extraordinarily fine resolution, or the ability to detect the smallest possible details in an image. The better the resolution, the better the image and the more detail the image will show. Even the best individual telescopes or array of telescopes at one location do not have a good enough resolution to image Sagittarius A*. 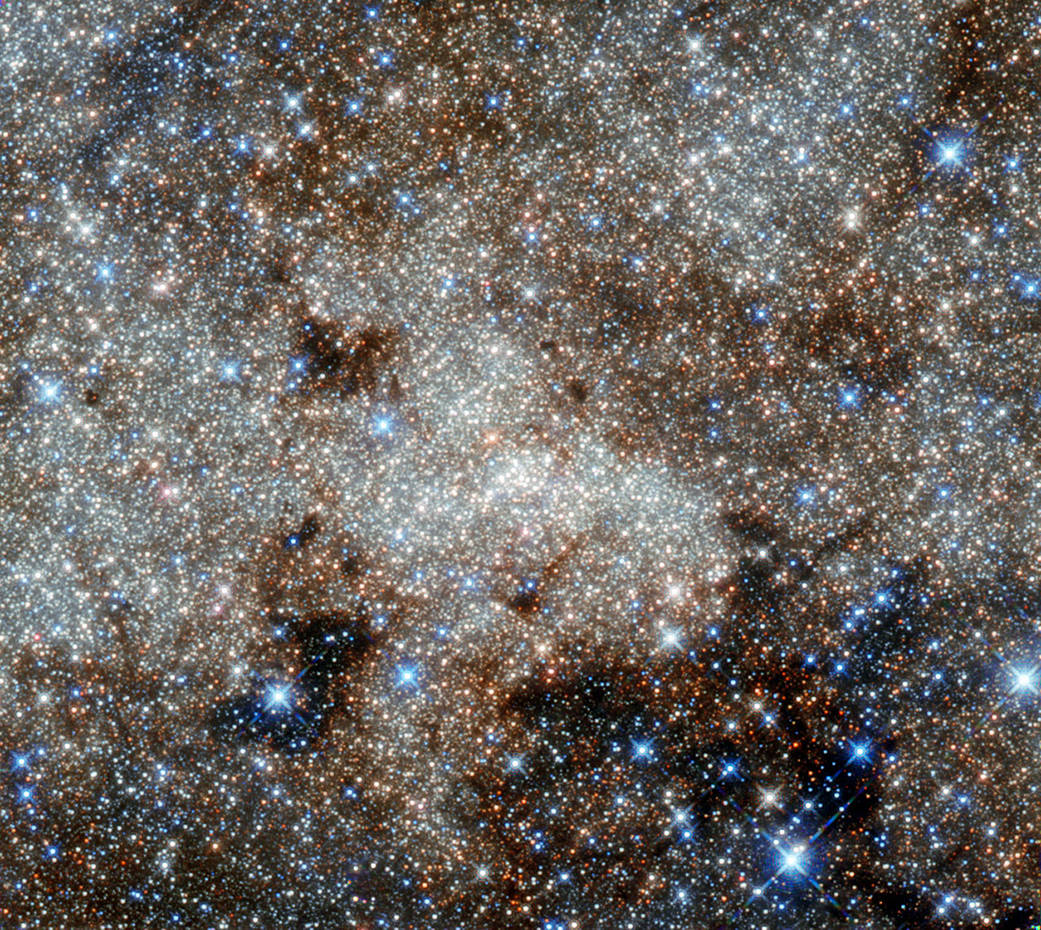 This image captured by NASA's Hubble Space Telescope shows the star-studded center of the Milky Way towards the constellation of Sagittarius. Even though you can't see our galaxy's central black hole directly, you might be able to pinpoint its location based on what you've learned about black holes thusfar. Image credit: NASA, ESA, and G. Brammer | âº Full image and caption

The addition of the 12-meter Greenland Telescope, though a relatively small instrument, widened the diameter, or aperture, of the Event Horizon Telescope to nearly the diameter of Earth. And NOEMA â itself an array of twelve 15-meter antennas with maximum separation of 2,500 feet (760 meters) â helped further increase the Event Horizon Telescopeâs light-gathering capacity.

Altogether, when combined into the mighty Event Horizon Telescope, the virtual array obtained an image of Sagittarius A* spanning about 50 microarcseconds, or about 1/13th of a billionth the span of the night sky. 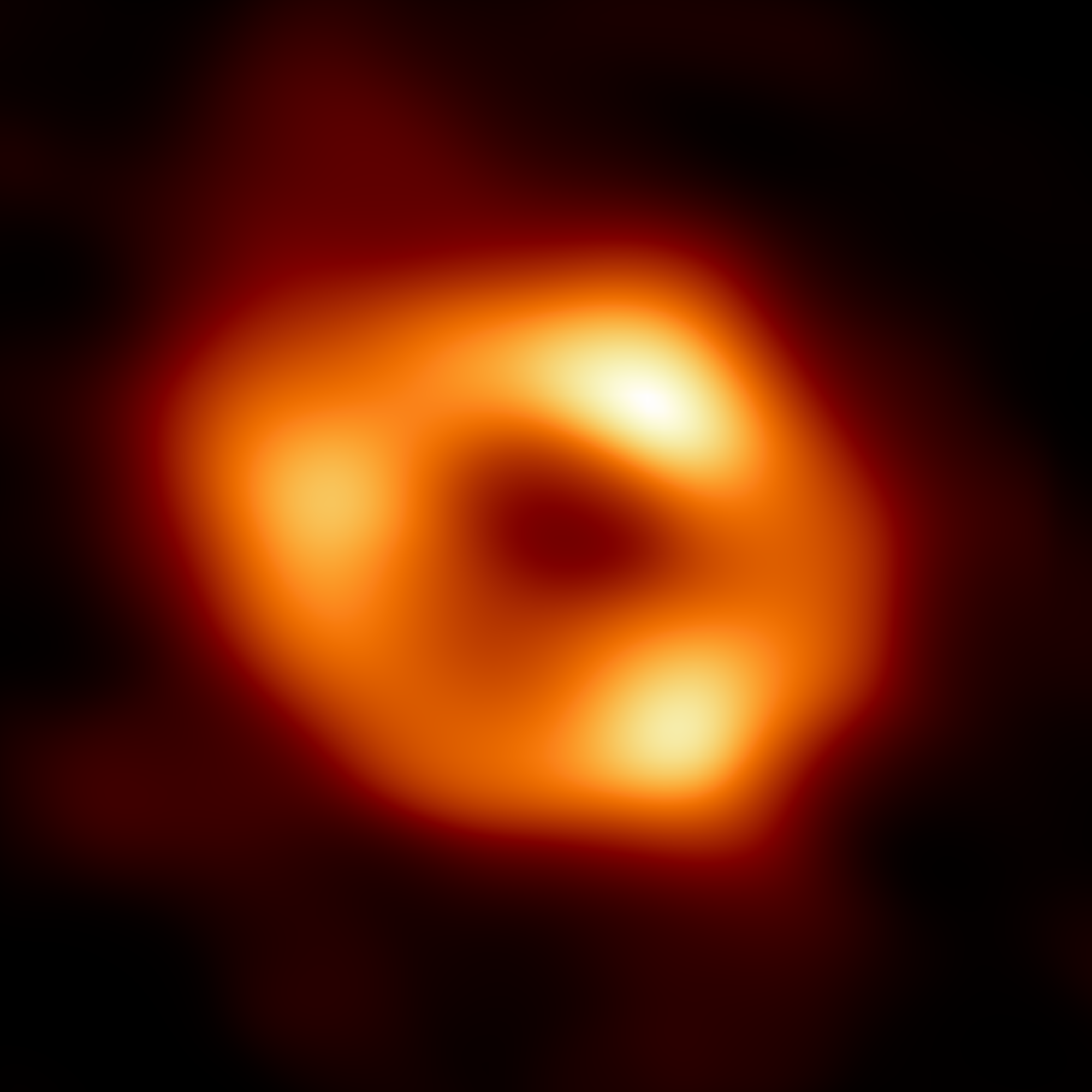 Sagittarius A* is more than 26,000 light years (152 quadrillion miles) away from Earth and has the mass of 4 million suns. Image credit: Event Horizon Telescope | âº Full image and caption

While the Event Horizon Telescope was busy capturing the stunning radio image of Sagittarius A*, an additional worldwide contingent of astronomical observatories was also focused on the black hole and the region surrounding it. The aim of the team, known as the Event Horizon Telescope Multiwavelength Science Working Group, was to observe the black hole in other parts of the electromagnetic spectrum beyond radio. As part of the effort, X-ray data were collected by NASAâs Chandra X-ray Observatory, Nuclear Spectroscopic Telescope (NuSTAR), and Neil Gehrels Swift Observatory, additional radio data were collected by the East Asian Very Long-Baseline Interferometer (VLBI) network and the Global 3 millimeter VLBI array, and infrared data were collected by the European Southern Observatoryâs Very Large Telescope.

The data from these multiple platforms will allow scientists to continue building their understanding of the behavior of Sagittarius A* and to refine their models of black holes in general. The data collected from these multiwavelength observations are crucial to the study of black holes, such as the Chandra data revealing how quickly material falls in toward the disk of hot gas orbiting the black holeâs event horizon. Data such as these will hopefully help scientists better understand black hole accretion, or the process by which black holes grow.

Check out these resources to bring the real-life STEM of black holes into your teaching, plus learn about opportunities to involve students in real astronomy research.

This Teachable Moment was created in partnership with NASAâs Universe of Learning. Universe of Learning materials are based upon work supported by NASA under award number NNX16AC65A to the Space Telescope Science Institute, working in partnership with Caltech/IPAC, Center for Astrophysics | Harvard & Smithsonian, and the Jet Propulsion Laboratory.