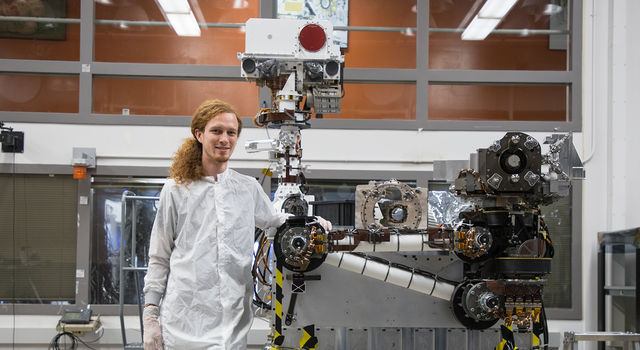 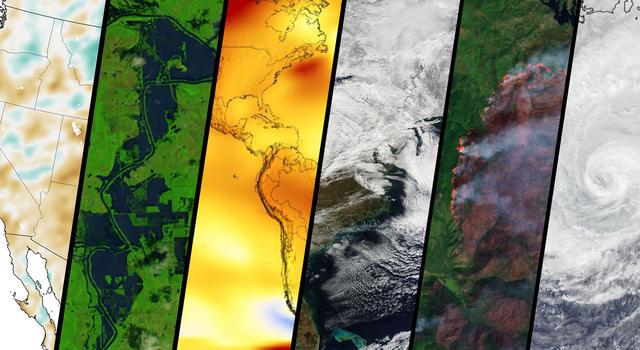 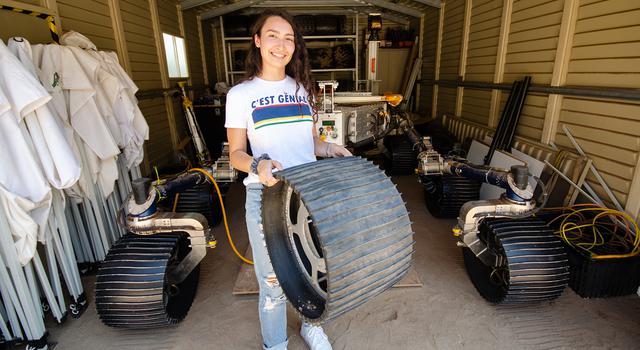 A single movement of NASA's next Mars rover could require, among other things, the careful dance of six independently motored wheels, a retractable arm containing a laboratory's worth of tools, a swiveling head supporting multiple cameras and a computer that can pinpoint the rover's precise location. So this past summer, while other teams and their interns at NASA's Jet Propulsion Laboratory were testing cameras and calibrating science instruments to prepare the rover for its February 2021 debut on Mars, intern Isabel Rayas was making sure all those pieces move seamlessly together. This meant spending a lot of time in the laboratory's Mars Yard, a sandbox of sorts where engineers put models of the rover through various test drives. For Rayas, a graduate student studying computer science and robotics at the University of Southern California, it was also a window into one potential future career, although, she says, "I'm definitely still exploring." We chatted with Rayas to learn more about her role on the Mars 2020 mission and what it's like to drive a rover.

I am working on mobility testing for the Mars 2020 rover. It's taking all of these parts that impact something like mobility â the motion of the rover â and understanding how they work together. We're testing everything to make sure that all the parts play nicely together and that one of them doesn't have a bug that's going to cause a failure in another part of the system.

Are you working on the actual rover that's going to Mars?

There's a whole spectrum of testbeds. What you're testing will dictate which testbed you use. If you're only trying to test one small part of the rover, you're not going to bother using the full system. The flight software testbed, where I'm working, has the real flight computer. It has some of the real cameras. It doesn't have the real motors yet, but we're working on it. Assembly, Test and Launch Operations, or ATLO, is actually putting together the real thing and doing tests with the real hardware.

Tell me more about your role in the flight software testbed.

There are two main things that I am working on this summer: One of them is getting all the hardware pieces in the flight software testbed that impact the mobility of the rover.

You might think that mobility is just the wheels of the rover, but there are a lot of subsystems and instruments that have an influence on mobility. There is an instrument called RIMFAX that will be used for radar sounding. It will point at the Martian surface to collect readings of what the subterranean surface looks like and what it's made up of. You wouldn't necessarily think that has an impact on mobility, but it actually does, because you have to know exactly where you are when you take a radar sounding in order to make any sense of it. You have to be able to tell, "I've moved this far, and this is what I'm sounding, and that's what the ground looks like at this specific spot." So that's a piece of hardware that needs to be integrated into a full mobility test. Then there's the flight computer. There's a computer just for processing the images from the rover. That's also not in the testbed yet, so that's something I'm trying to get delivered so we can run tests with it.

Once we get all these hardware parts into the testbed, we want to run a mobility sequence that tells the motors to move while doing all of these tasks to make sure the system works. So I'm writing the procedure and making sure that all the parts are in the testbed for that.

The second thing I'm working on is in the Mars Yard. While we do test drives around the Mars Yard, we want to know precisely where the rover is located, because we want to be able to know whether or not the autonomous system that tells the rover where it is works. So I'm looking at different systems that will help us do those tests.

There's no good answer to that. It changes day by day, which is exciting. This morning, for example, I was in the Mars Yard learning about a position tracking system with someone who was setting it up to do a test. As a systems engineer, you have to go to a lot of meetings, because you have to learn from different teams about what's going on and go over test procedures. I compile all the information from the meetings, try to understand it and meet with more people to get questions answered. I'm in and out of the office. I'm in the Mars Yard. I'm in the testbed, in the cleanroom â all kinds of stuff. 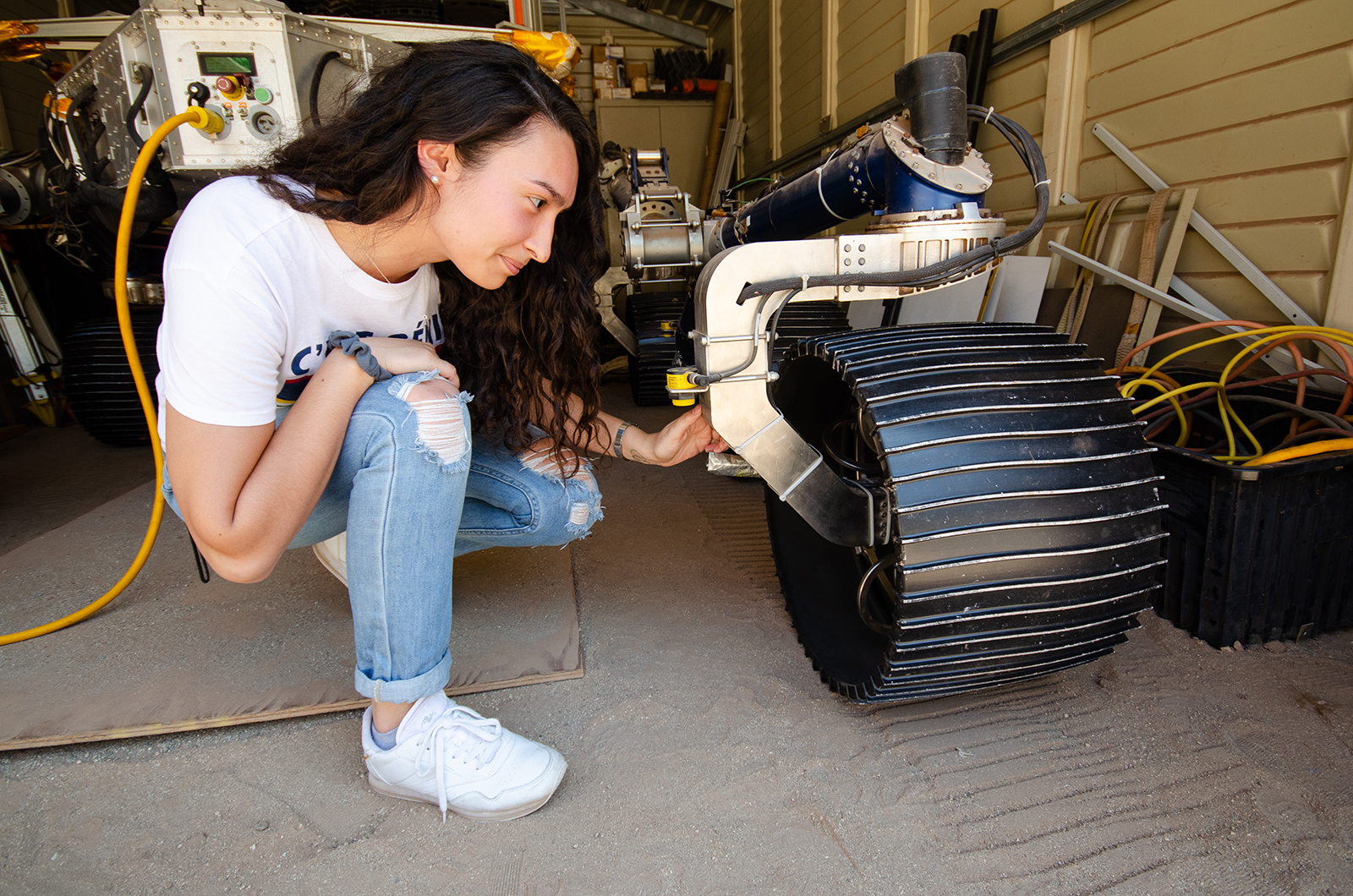 Rayas examines one of the Scarecrow rover's wheels. Scarecrow is a simplified version of a Mars rover that's used for testing maneuvers on a simulated Red Planet terrain at JPL. Image credit: NASA/JPL-Caltech/Kim Orr | + Expand image

You do a little of everything. For the rover, you have people designing the wheels, and you have people designing the instruments. Those people have to be experts in that thing and understand exactly how it works and make sure that nothing's going to break. While those people are experts in a specific part of the system, they can't be expected to also understand how everything comes together and how that impacts the whole system. So that's where systems engineers come in. They are not experts in any one of the areas, but they have to understand enough about each of them to know how they impact each other.

Is that what you are studying in school?

No. I just finished my first year of grad school at the University of Southern California, studying computer science and robotics. I got my undergrad in aerospace engineering from MIT, so I have previous experience in aerospace, but I haven't taken any systems engineering classes. My senior capstone had a systems engineering project, and I got exposure to it there, but we had maybe 100 requirements for our project, and here there are tens of thousands. It's a little bit of a step up.

What got you into aerospace engineering?

I think this is maybe true of most kids, but I really liked looking at the stars and thinking about the planets. I knew from a very young age that I was interested in STEM. I took an astronomy class in high school that I loved, and I thought I wanted to do astrophysics, but when I got to college, I took a physics class and didn't like it at all. I switched to the closest thing that wasn't science, which was aerospace engineering.

I also minored in brain and cognitive sciences, because I really couldn't decide. I took some computer science classes during college as well. So I've been kind of all over the place, and I ended up here again.

What made you focus on computer science and robotics for grad school?

My undergrad was in aerospace, but with a concentration in autonomous systems. I've always been interested in the robotic applications of aerospace â not necessarily the rocket design, or propulsion, or the aerodynamics or anything like that.

I actually interned here two years ago. My friend had interned at JPL the year before, and she was like, "This was awesome. I love it so much." As an aerospace major, it's kind of the dream, right? So I ended up coming here two years ago. Now that I'm at USC, it's so close that I thought I could probably find some way to be here again this summer, doing something new that's not really related to my program at school.

What's the most JPL- or NASA-unique experience that you've had here?

My first day was right after the Explore JPL event, so thousands of people had come through that weekend to learn about what JPL does and see all the different labs and technology. They had brought the Scarecrow rover, [used to test Mars rover drives], down to the entrance of JPL so people could see it move around. When I got here on Monday, it was my mentor's job to bring it back to the Mars Yard, which is all the way down the street, up the hill â not close at all. So he was like, "Do you want to move the rover across the Lab?"

We had to pick up the rover with a crane and drive it across lab. People were taking videos of us as we went by. After that, my mentor was like, "Do you want to drive it around the Mars Yard?" So I got to drive it around for a while. That was something that I think is kind of unique.

What do you hope to accomplish during your time here?

I would really like to see this test procedure run. I have high hopes. Ten weeks [at JPL] is such a short amount of time. I think it would be easy to get caught up in a lot of things that are less important and end up having something half-finished. I know from talking to my mentor that a test that includes all of this hardware could be really valuable, because it would help the team find bugs before they're too late to fix. Knowing that's my responsibility is exciting. It's a little bit scary, but in a good way.

What's your ultimate goal for your career?

I'm not really sure yet. I'm definitely still exploring. I think internships are a great way to do that, so I'm planning on doing as many as I can in as many different fields as I can. Beyond that, I think my overarching career goal is to keep learning. I don't know where that will take me.

Speaking of future careers: If you could play any role in NASA's plans to send humans back to the Moon and on to Mars in the near future, what would it be?

Wow. That's tough. I would love to be one of the people who goes to the Moon. I don't think I would want to go to Mars.

It's too far. I like Earth a lot. It's probably my favorite planet. So I wouldn't want to get too far from home. But I would love to go to space. Going to the Moon would be a nice, happy medium.

Have you ever thought about applying to be an astronaut?

Not seriously. I wanted to be an astronaut for the first couple of years in college. But I thought about it some more and about how much training you have to do, and I didn't want to dedicate all my time to training. I thought I could use engineering instead to help us get there.