Send Your Name to Mars 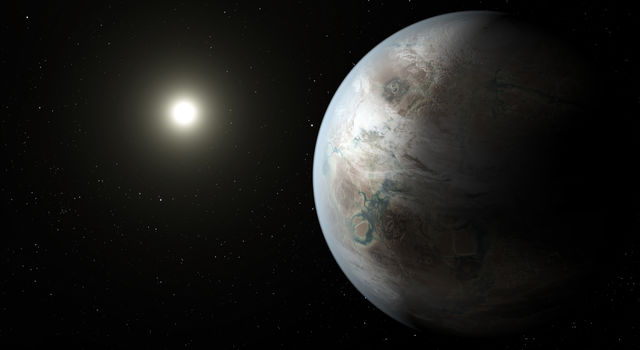 Twenty years after the first discovery of a planet orbiting another sun-like star, scientists have discovered the most Earth-like exoplanet ever: Kepler-452b. Located in the habitable zone of a star very much like our sun, Kepler-452b is only about 60 percent wider than Earth.

What makes it the most Earth-like exoplanet ever discovered?

First a couple definitions: An exoplanet is simply a planet that orbits another star. And the habitable zone? Thatâs the area around a star in which water has the potential to be liquid -- not so close to the star that all water would evaporate, and not so far that all water would freeze. Think about Goldilocks eating porridge. The habitable zone is not too hot, and not too cold. Itâs just right.

Okay, back to Kepler-452b. Out of more than a thousand exoplanets that NASAâs Kepler spacecraft has detected, only 12 have been found in the habitable zone of their stars and are smaller than twice the size of Earth, making Earth-like planets a rarity. Until this discovery, all of them have orbited stars that are smaller and cooler than our sun. Twelve Exoplanet discoveries from Kepler that are less than twice the size of Earth and reside in the habitable zone of their host star. The sizes of the exoplanets are represented by the size of each sphere. These are arranged by size from left to right, and by the type of star they orbit, from the M stars that are significantly cooler and smaller than the sun, to the K stars that are somewhat cooler and smaller than the sun, to the G stars that include the sun. The sizes of the planets are enlarged by 25X compared to the stars. The Earth is shown for reference. Image credit: NASA/JPL-Caltech/R. Hurt The sweep of NASA Kepler missionâs search for small, habitable planets in the last six years. The first planet smaller than Earth, Kepler-20e, was discovered in December 2011 orbiting a Sun-like star slightly cooler and smaller than our sun every six days. But it is scorching hot and unable to maintain an atmosphere or a liquid water ocean. Kepler-22b was announced in the same month, as the first planet in the habitable zone of a sun-like star, but is more than twice the size of Earth and therefore unlikely to have a solid surface. Kepler-186f was discovered in April 2014 and is the first Earth-size planet found in the habitable zone of a small, cool M dwarf about half the size and mass of our sun. Kepler-452b is the first near-Earth-Size planet in the habitable zone of a star very similar to the sun. Image credits: NASA Ames/W. Stenzel

Kepler-452b is the first to be discovered orbiting a star that is about the same size and temperature as our sun. Not only that, but it orbits at nearly the same distance from its star as Earth does from our sun! Conditions on Kepler-452b could be similar to conditions here on Earth and the light you would feel there would be much like the sunlight you feel here on Earth. Scientists believe that Kepler-452b has been in the habitable zone for around six billion years -- longer than Earth has even existed! The Kepler spacecraft, named for mathematician and astronomer Johannes Kepler, has been working since 2009 to find distant worlds like Kepler-452b. It does so by looking at more than 100,000 stars near the constellation Cygnus. If one of those stars dims temporarily, it could be that an object passed between the spacecraft and the star. If it dims with a repeatable pattern, thereâs a good chance an exoplanet is passing by again and again as it orbits the star. The repeated dimming around one of those stars is what led to the discovery of Kepler-452b.

Kepler measures the brightness of stars. The data will look like an EKG showing the heart beat. Whenever a planet passes in front of its parent star as viewed from the spacecraft, a tiny pulse or beat is produced. From the repeated beats we can detect and verify the existence of Earth-size planets and learn about the orbit and size of the planet.Video credit: NASA Ames and Dana Berry

This exciting discovery provides opportunities for students to practice math skills in upper elementary and middle school, and gives high school students a practical application of Keplerâs third law of planetary motion. Take a look below to see where these might fit into your curriculum.

After learning about Earthâs cousin, students might wonder about a trip to this world. Scientists have calculated the distance between Earth and Kepler-452b at 1,400 light years. A light year is a measure of distance that shows how far light travels in one year. Itâs equal to about 10 trillion kilometers (six trillion miles) or, to be more precise, 9,461,000,000,000 kilometers (5,878,000,000,000 miles). Ask students to calculate the distance between Earth and Kepler-452b at various levels of precision, depending on what they are prepared for or learning. For an added challenge, have them determine how long it would take a fast moving spacecraft like Voyager 1 traveling at 61,000 kph (38,000 mph) to reach this new world.

Note: Due to the approximations of spacecraft speed and light year distance used for these problems in both standard and metric units, there is a variation among the answers.

or using exponents and powers of 10â¦

The time between detected periods of dimming, the duration of the dimming, and the amount of dimming, combined with a little math, can be used to calculate a great deal of information about an exoplanet, such as the length of its orbital period (year), the distance from its star, and its size.

Keplerâs 3rd law states that the square of the orbital period is proportional to the cube of the semi-major axis of an ellipse about the sun. For planets orbiting other stars, we can use R = â(T2 â Ms)  where R = semi-major axis, T = orbital period in Earth years, and Ms = the mass of the star relative to our sun (the star that Kepler-452b orbits has been measured to be 1.037 times the mass of our sun).