Students Demonstrate How To Get Images From Lunar Orbit 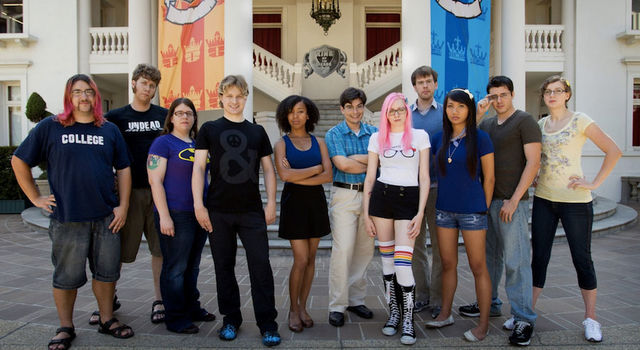 It's Moogega Cooper's second Nerd War and she's in uncharted territory. She's been picked to play "Shadow Raven" in a fantasy story line about a "dark cult trying to resurrect an elder god." It's not that she's unaccustomed to playing a hero of sorts. As a planetary protection engineer at NASA's Jet Propulsion Laboratory in Pasadena, Calif., her job is quite literally to protect our planet and others in the solar system. It's just that this isn't her particular brand of nerd-dom -- yet.

This summer, Cooper took a break from her day job at JPL analyzing contamination risks for distant spacecraft and testing the might of extreme organisms to spend a month entrenched in a world of nerd dancing, extreme gaming and superhero debates as part of King of the Nerds, a reality competition show airing Thursday nights on TBS.

"It's a show that gets 11 nerds from across this nerd spectrum, which includes 'cosplay,' the people who do costume play, people who like comic books, scientists and engineers," said Cooper.

The nerds are pitted against each other in Survivor-style challenges, called Nerd Wars, with uniquely geeky twists, all while dealing with the often larger challenge of living under the same roof: a Pasadena, Calif., mansion dubbed "Nerdvana."

Cooper, who in the episode airing tonight is one of five finalists, says of the show that it was a test not just in smarts but in pure mental stamina. By the time the Nerd War got to her expertise in physics, "one plus one did not equal two at that point," she said.

Each of the self-proclaimed nerds have their specialties - Ivan is a video game developer, Celeste is a gamer, Danielle is an internet star and Genevieve is a Batman fangirl --  that come into play through the various team challenges and especially in the drama in Nerdvana.  Cooper (who said she would avoid the drama by sneaking off to do puzzles) gets her nerd chops from her background and work in astrophysics, which has fascinated her from an early age.

"The main thing that sparked my interest in science was Carl Sagan's Cosmos," said Cooper who also spent much of her young life in Hampton, Va., near NASA's Langley Research Center. "When we would go to the library, we would rent the videos. Because he had several, we would take one every week. And because of him and Stephen Hawking, I thought, I'm going to be an astrophysicist."

Cooper was quick to turn that thought into a reality, doubling up on high school classes during her summers so she could start her undergraduate work at Hampton University at the age of 16. She later scored a place at JPL as a NASA Harriett G. Jenkins Pre-doctoral Fellow studying the use of non-equilibrium plasmas for spacecraft sterilization.

Now, at 27, she's switched to what she jokingly calls "the dark side" --  that is, engineering -- and spends her days working on various projects that involve keeping chemical or biological elements from hitching a ride on spacecraft and contaminating our planet (on returning to Earth) and other planets.

"The coolest part of my job is just having a new task to work on all the time," said Cooper. "I mean there's the same umbrella goal, but it manifests itself in either the test bed here or looking at the chemistry of a sample when it interacts with spacecraft hardware or playing with bacteria and seeing if we can kill it."

So while she's certainly got nerd cred, she also has one of the coolest jobs around. The question is whether she can survive the extreme environment of a house of nerds.

"It's kind of like moving back home, where you know there are people that you have to live with and you can't really escape," said Cooper. "There were times when the personalities didn't quite mesh together completely but because we eventually got to learn about each other and what makes us the way we are, everybody was just family."