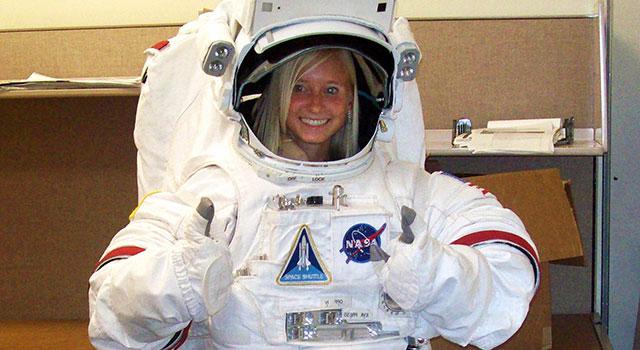 When people ask me what I want to do with my life, I tell them, "Every little kid wants to be an astronaut when they grow up - but I never outgrew it." It was in eighth grade that I realized I wanted to be an astronaut and explore our solar system. The journey wasn't always easy, however. I was consistently laughed at and made fun of in high school when I would tell people that my dream was to work at NASA and one day become an astronaut. No one really expected me to stick to those dreams, let alone accomplish them.

Fast forward a few years, and I entered college at the Florida Institute of Technology, where I double-majored in physics and space science to learn more about stars and comets. One moment I will never forget is orientation day for my department. A professor asked the freshmen in the room who wanted to be an astronaut, and every hand in the room shot up. I knew I was in the right place.

In my sophomore year, an upperclassman sent an email around about a scholarship-internship program with NASA, called MUST (Motivating Undergraduates in Science and Technology). I figured it was a long shot, but decided to apply. To my delight, I was selected and given the opportunity to begin living out my dream by interning at Kennedy Space Center for the summer. I worked for Dr. Philip Metzger, a granular physicist who leads NASA's research into rocket blast effects for manned missions. In the Granular Mechanics and Surface Systems Laboratory, I designed and built experiments to study how the spray of lunar soil from a landing rocket will impinge upon and damage hardware at a future lunar outpost.

This NASA experience changed the course of my career, in a very good way. I suddenly realized I was far more interested in the surfaces of planets and in planetary exploration than in stars and astrophysics, and decided after that summer to pursue planetary science for my graduate studies.

I returned to KSC the next summer to work with Dr. Metzger on a new project that involved studying the compaction and magnetic properties of lunar soil using various experimental methods. We were working on developing more effective ways to store large quantities of soil for mining.

The summer before starting graduate school, I was offered an internship at JPL working on the proposed MoonRise mission, lead by my (soon-to-be) advisor, Dr. Bradley Jolliff. MoonRise would have been a robotic sample return mission to the lunar farside. I was part of a team of students who were tasked with designing an instrument to fly on the spacecraft. We designed a camera system that would have flown on the communications satellite and detected impact flashes from impacting meteorites. Unfortunately, MoonRise was not selected to fly, but the experience shaped my future career path. I realized I really enjoy the mission design and planning process and decided that summer that I wanted to both study the moon and plan for future missions.

I am now a couple years shy of having my Ph.D. in Earth and Planetary Science, and have loved the journey. My research focuses on studying the effects of rocket exhaust on lunar soil properties and volcanic complexes on the moon. Once I have finished my graduate studies, I plan to apply for a position at NASA and become involved in mission planning. I hope to work on the problems associated with rocket exhaust effects on planetary surfaces and continue to research geologically interesting locations on the moon. Ultimately, I plan to apply to become an astronaut candidate and maybe even become the first woman to walk on the moon! My NASA internships helped me realize my true passions and have paved the way for the career path I want to take. I'm incredibly happy in the field I'm in and hope that funding for both NASA and NASA education programs continues so that other students with dreams like mine have a chance to see them come true.