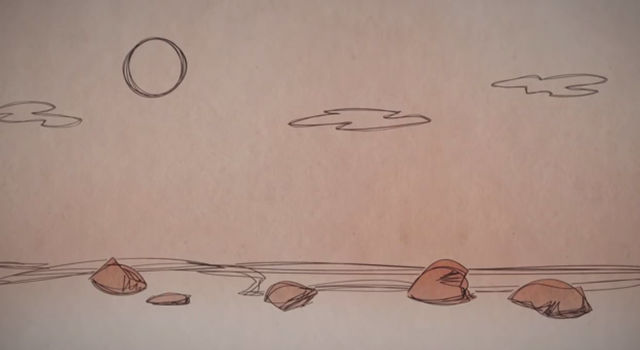 Mars in a Minute: Is Mars Really Red?
Hannah's science project is due tomorrow but her model of the solar system isn't finished and it's past her bedtime. How will she get it done? With a little help from her friends â the most talented troupe in the Milky Way!

The project's due tomorrow
And I have to go to bed

Put your hands up in the air to see a solar flare
C'mon feel the commotion of this giant explosion!

We got Mercury, Venus, Earth and Mars
They're my crew along with all the other moons and stars
There's Jupiter, Saturn and of course Uranus
He's a really nice planet though his name is heinous
Don't forget Neptune, Pluto and his dwarfy friends
The Universe is cool because it never ends.

[MERCURY]
Yo' I'm Mercury, you can call me Merc
First planet in line but that don't make me a jerk.

I'm not tilted or wilted 'cuz I got no air
Covered with craters so please don't stare.

I'm rocky and stocky built like a jockey
Smallest of our bunch, made with metals, packed with punch - Yo'!

[VENUS]
V to the E to the N â U â S
I'm the hottest and brightest, don't be envious

I've got a nickname, it's "Morning Star"
And I'm covered in clouds that are thick as tar

There are volcanoes all over my surface
Forgive me if I'm volatile, it's not on purpose

[EARTH]
Third is the word, my name is Planet Earth
I'm oozing with life, every day I give birth

I'm a blue and white marble, floating in space
With jungles, rocks, and oceans and tectonic plates

I got an atmosphere, biosphere, geosphere and hydrosphere
And if that's not enough I even got a cryosphere

8,000 miles wide but I don't need a diet
Got lots of gravity, dare you to defy it
I've got summer, winter, spring and fall
If you haven't guessed yet - I've got it all!

Got CO2 and H2O
Will people live on me? Wouldn't you like to know?

I've got colored bands, a giant made of gas
There are clouds and storms all over my mass

Takes me 12 years to orbit 'round the sun
If you jive with # 5 then I'm your favorite one.

[SATURN]
Hey everybody, I'm 6th and I'm Saturn
I got swirly winds in a stripey pattern

My magnetosphere makes a gorgeous aurora
Loop the Sun in 29 years, hope that doesn't bore ya'

[URANUS]
I'm lucky # 7, Uranus is my name
Living way up in the heavens, got some ice and methane

I like to spin on my side
And in reverse, kick it with a backslide

[NEPTUNE]
Yo' I'm Neptune and I'm really far out
I've got a Great Dark Spot, that's nothin' to laugh about

I'm freezing cold, got methane ice
I'm blue as an ocean in paradise

Now I'm a dwarf planet hangin' in the Kuiper Belt
But I still can jam it, so cool I'll never melt

There's Ceres, Eris, Haumea and Makemake
Maybe 200 more which is quite a shocka'

[HANNAH] Space is so cool! It's like a big party. There's a pulse that keeps the groove, but what make everything move?

Magnetizing is hypnotizing
It's so strong there's no compromising
Attracting, bringing, pulling,
It's so fun, fun, fun, fun

[HANNAH] "One small step for man, one giant leap for mankind."

It's a marvelous night for a moondance
So let's moonwalk the night away
Inviting all of the lunatics
To come on, come out and play

People only see one side of me
It's my smiling happy face
But what most of them don't know is
That I'm moving further away in space â in space.

So it's a marvelous night for a moondance
So let's moonwalk the night away
Inviting all of the lunatics
To come on, come out and play

[METEOR] A comet? You've got to be kidding me.

[METEOR] Kid, you don't know the half of it.

Sometimes I don't feel right
Like I'm a Meteor-Wrong
Wandering alone at night
So I sing this sad, sad, song
Cuz I'm misunderstood
Lots of people think I'm a comet
And that don't feel so good
It makes me feel totally unwanted

They call me a shooting star
But I'm not even a star
I'm a tiny piece of debris
That's going fast and really far
Sometimes I can reach speeds
Like 100,000 miles an hour
But if I'm from a comet
You can see me in a meteor shower

So if you wish upon me
Well, I hope it comes true
But if it don't
There's nothin' I can do
Cuz sometimes I'm just
A Meteor-Wrong and that is just the truth
Til then I've got the pitiful Meteor-Wrong blues!!!

Ladies and Gentlemen, direct from the Oort Cloud, it's the funny man himself. Here's Halley.

Hello everybody -- how we doing tonight? It's good to see ya' here! Wacka! Wacka! Wacka! All right. We're gonna have some fun. My name is Halley, I'm a comet. A stand-up comet. Alrighty then. OK.

So guys, you're looking good out there. I see a couple shining stars in the audience ... and a couple stars with shiners. Look at that guy over there - he's a real crater face. A face only a mother could love.

Speaking of mothers, my mother's so old she's made of dust. Zing! Hello. Geez, can't I get a laugh? Ya' think is easy up here. Cut me some slack -- I'm the only guy in space who gets booked every 75 years. Who's my agent? Father Time? Hello. Geez, a black hole has more personality than you guys. Really.

Lemme tell you, my neighborhood's really gone downhill. The Kuiper belt ain't what it used to be. I've got this crazy rap band blasting me out next door. What are they called, the Neptunes or something? They only good thing about 'em is they're louder than my wife. Hello. Don't even get me started on her.

My wife -- she's always on me to do something about my hair - she doesn't like the tail. She says mullets went out of style last millennium. I say, "Hey! Mullets are cool. Listen, you got business in the front and party in the back!" Come on! My wife, she's always complaining about my wardrobe. Telling me to pull up my pants 'cuz she can see the moon. So what'd she get me for my 4 billionth birthday? Another asteroid belt. Another one? Can't a guy get some socks? It's cold out here.

So what do you think about that Saturn? Pretty cute, huh? We go way back. I knew her since she was a kid. Sweet girl but not so clean. Her mother used to say every time she got out of the bathtub she left a ring.

Believe it or not I'm not much of a ladies man. I've never had much luck with the ladies. I picked up this nickname "Dirty Snowball" somewhere along the way. What's that supposed to mean? First of all I'm made of ice, thank you very much. And I'm no dirtier than all those gas-bag planets like Uranus. Don't even get me started on him. He still owes me money.

I got a couple of kids. They're a piece of work, I tell ya'. Junior calls himself Hale Bopp -- he's a bright one. He'll go far. But the other ones I hardly ever see ... kids these days, so hard to keep track of 'em. I got this one who's a hooligan. One night he's on a joyride around the solar system and BOOM, crashes right into Jupiter. He said he didn't see it. How can you not see the biggest planet in the solar system. Hello. So I ask him, "Weren't you wearing your glasses?" He says, "Yeah Pops -- but they kept freezing up." Because of the atmosphere.

Alright, they're telling me rap it up. I gotta get on the bus. The driver's crazy -- all over the road. A real astronut.

Anyway you've all been great. I hear the food's delicious even though this place lacks atmosphere. And from the sounds of it, an inability to recognize true talent. Me! Tip your waitresses. Keep shooting for the stars. And watch out for those Asteroids. Crazy kids.

Made of iron and rock
And we're born to rock
No need to talk
We got Mohawks
We're the asteroids!
Asteroids.
We rock. We rock.

We're strange and small
But if we fall
Like a cannonball
On you you'll call
The hospital
Don't take it personal
We're anarchical
We're RADICAL!

[HANNAH]
Oh no, the asteroids crashed into my science project and broke it. I'll never finish it now. I'm gonna fail for sure. I can't believe this. What am I going to do?

[HANNAH] Um, Are you who I think you are?

[HANNAH] What are you doing here?

[SCIENTISTS] We've come to take you out of your quagmire.

[HANNAH] That's easy for you to say - you're like the most famous geniuses ever. What would you guys know about failing?

[GALILEO] Oh you had it easy!

I designed the 1st telescope
To investigate the sky
But what I ended up discovering
Actually made me cry.
Nobody believed my ideas
Even though I was correct
When I tried to convince the public
I was put under arrest!

My relatives didn't get relativity
They made fun of my hair
They made me regret ever sharing
That E = MC2 (MC squared)
But I persisted with my theory
And found people who understood
Now I'm a legend
Like the Little Engine Who Could.

[NEWTON]To know is to ask
To ask is to know
If you're not facing your fears
Then how will you ever grow?
For instance ...

People told Benjamin Franklin to go fly a kite
And because of Edison's tenacity, we now can see at night
Mrs. Herschel had ups and downs before she won a prestigious honor
Huygens skipped dinner observing Saturn's rings and yonder

We tell you all these facts, not to bring you down
But to remind you that we're all human, and we weren't always renowned
It took years of hard work and belief in our dreams
But no matter how tough it gets, it's never as bad as it seems

[HANNAH] I believe I can do it!

[SCIENTISTS] We believe you can do it!

[ALL] Take a breath and exhale!

Hey Newton - do you have a brother named Fig?

[HANNAH] I know I can do it. I'm going to finish this project, and it's gonna turn out awesome. I'll just ask for a little help from my friends. Together we'll make a big bang!