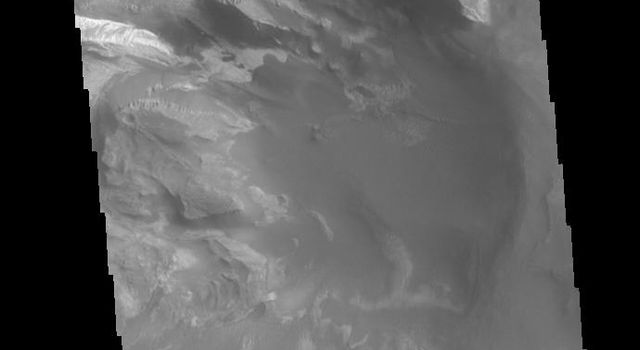 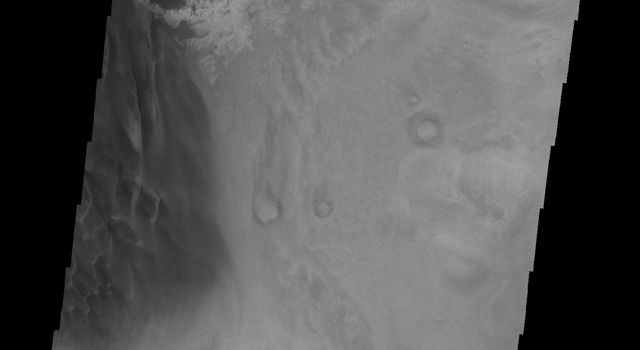 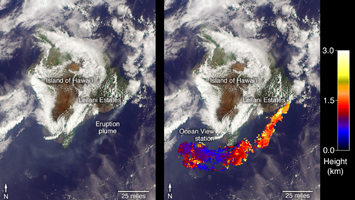 On May 3, 2018, a new eruption began at a fissure of the Kilauea volcano on the Island of Hawaii. Kilauea is the most active volcano in the world, having erupted almost continuously since 1983. Advancing lava and dangerous sulfur dioxide gas have forced thousands of residents in the neighborhood of Leilani Estates to evacuate. A number of homes have been destroyed, and no one can say how soon the eruption will abate and evacuees can return home.

On May 6, 2018, at approximately 11 a.m. local time, the Multi-angle Imaging SpectroRadiometer (MISR) instrument on NASA's Terra satellite captured this view of the island as it passed overhead. Much of the island was shrouded by clouds, including the fissure on its eastern point. However, an eruption plume is visible streaming southwest over the ocean. The MISR instrument is unique in that it has nine cameras that view Earth at different angles: one pointing downward, four at various angles in the forward direction, and four in the backward direction. This image shows the view from one of MISR's forward-pointing cameras (60 degrees), which shows the plume more distinctly than the near-vertical views.

The information from the images acquired at different view angles is used to calculate the height of the plume, results of which are superimposed on the right-hand image. The top of the plume near the fissure is at approximately 6,500 feet (2,000 meters) altitude, and the height of the plume decreases as it travels south and west. These relatively low altitudes mean that the ash and sulfur dioxide remained near the ground, which can cause health issues for people on the island downwind of the eruption. The "Ocean View" air quality monitor operated by the Clean Air Branch of the State of Hawaii Department of Health recorded a concentration of 18 μg/m3 of airborne particles less than 2.5 micrometers in diameter at 11 a.m. local time. This amount corresponds to an air quality rating of "moderate" and supports the MISR results indicating that ash was most likely present at ground level on this side of the island.

MISR was built and is managed by NASA's Jet Propulsion Laboratory in Pasadena, California, for NASA's Science Mission Directorate in Washington. The Terra spacecraft is managed by NASA's Goddard Space Flight Center in Greenbelt, Maryland. The MISR data were obtained from the NASA Langley Research Center Atmospheric Science Data Center in Hampton, Virginia. JPL is a division of Caltech in Pasadena.