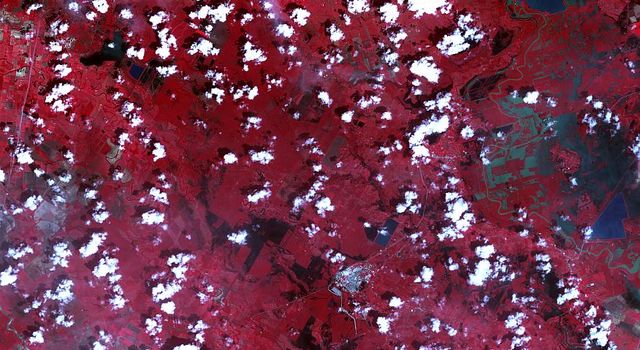 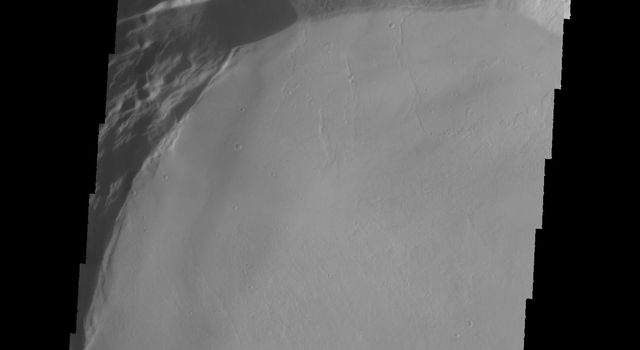 Investigating Mars: Ascraeus Mons
Click on an individual image for the larger version

Hurricane Irma is the strongest hurricane ever recorded outside the Caribbean Sea and Gulf of Mexico. These two images from the Atmospheric Infrared Sounder (AIRS) instrument aboard NASA's Aqua satellite show what Hurricane Irma looked like when Aqua passed overhead just before 1 p.m. local time (10 a.m. PDT) on Sept. 5, 2017. Forecasts at the National Hurricane Center have Irma passing near the major islands to its west before turning northward near Florida this weekend. The first image (top) is an infrared snapshot from AIRS (see Figure 1 for larger image). In orange and red areas, the ocean surface shines through, while blue and purple areas represent cold, high clouds that obscure what lies below. Typical of well-developed hurricanes, Irma is nearly circular with a well-defined eye at its center. The eye is about 25 miles (40 kilometers) in diameter. Careful scrutiny shows a red pixel in the center of the eye, which means that AIRS achieved a bulls-eye with one of its "looks" and was able to see to the ocean between the dense clouds in the eye wall. The second image (bottom) shows the view through AIRS' microwave-colored "lenses" (see Figure 2 for larger image). Here the ocean surface looks yellow, while green represents various degrees of cloudiness. Blue shows areas where it is raining heavily. The eye is not apparent in this image because the "pixel size" of the microwave sounder, about 30 miles (50 kilometers), is larger than the eye and therefore cannot "thread the needle." The infrared sounder, on the other hand, has a pixel size of only 10 miles (16.5 kilometers) and can distinguish the small eye.