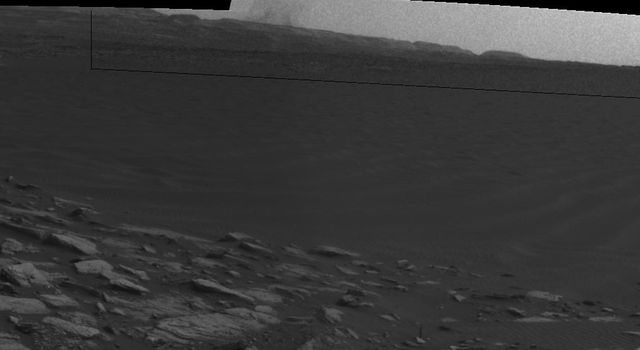 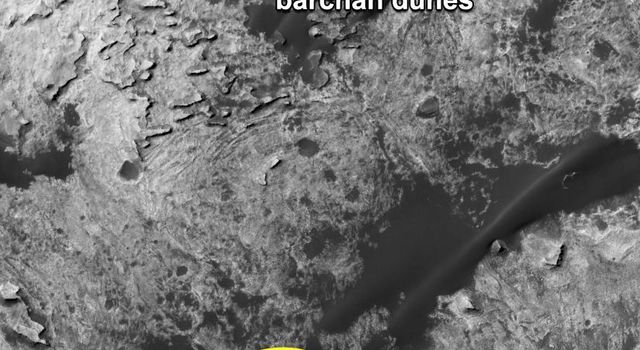 This sequence of images shows a dust-carrying whirlwind, called a dust devil, scooting across the ground inside Gale Crater, as observed on the local summer afternoon of NASA's Curiosity Mars Rover's 1,597th Martian day, or sol (Feb. 1, 2017).

Set within a broader southward view from the rover's Navigation Camera, the rectangular area outlined in black was imaged multiple times over a span of several minutes to check for dust devils. Images from the period with most activity are shown in the inset area. The images are in pairs that were taken about 12 seconds apart, with an interval of about 90 seconds between pairs. Timing is accelerated and not fully proportional in this animation.

A dust devil is most evident in the 10th, 11th and 12th frames. In the first and fifth frames, dust blowing across the ground appears as pale horizontal streak. Contrast has been modified to make frame-to-frame changes easier to see. A black frame is added between repeats of the sequence.

On Mars as on Earth, dust devils are whirlwinds that result from sunshine warming the ground, prompting convective rising of air that has gained heat from the ground. Observations of Martian dust devils provide information about wind directions and interaction between the surface and the atmosphere.

Curiosity's Sol 1597 location, reached by a drive during the previous sol, is mapped at http://mars.jpl.nasa.gov/multimedia/images/2017/curiositys-traverse-map-through-sol-1596.

For more information about Curiosity, visit http://www.nasa.gov/msl and http://mars.jpl.nasa.gov/msl. NASA/JPL-Caltech/Univ. of Arizona.