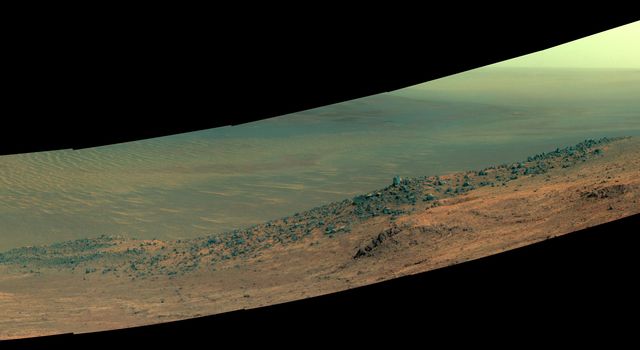 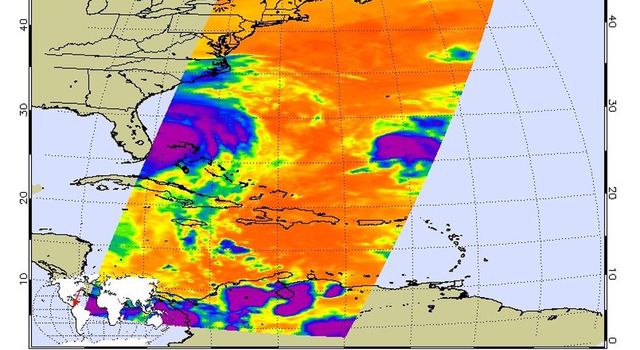 This scene from NASA's Mars Exploration Rover Opportunity shows "Wharton Ridge," which forms part of the southern wall of "Marathon Valley" on the western rim of Endeavour Crater.

The full extent of Wharton Ridge is visible, with the floor of Endeavour Crater beyond it and the far wall of the crater in the distant background. Near the right edge of the scene is "Lewis and Clark Gap," through which Opportunity crossed from Marathon Valley to "Bitterroot Valley" in September 2016.

Before the rover departed Marathon Valley, its panoramic camera (Pancam) acquired the component images for this scene on Aug. 30, 2016, during the 4,480th Martian day, or sol, of Opportunity's work on Mars.

Opportunity's science team chose the ridge's name to honor the memory of Robert A. Wharton (1951-2012), an astrobiologist who was a pioneer in the use of terrestrial analog environments, particularly in Antarctica, to study scientific problems connected to the habitability of Mars. Over the course of his career, he was a visiting senior scientist at NASA Headquarters, vice president for research at the Desert Research Institute, provost at Idaho State University, and president of the South Dakota School of Mines and Technology.

The view spans from east-northeast at left to southeast at right. It merges exposures taken through three of the Pancam's color filters, centered on wavelengths of 753 nanometers (near-infrared), 535 nanometers (green) and 432 nanometers (violet). It is presented in approximately true color.