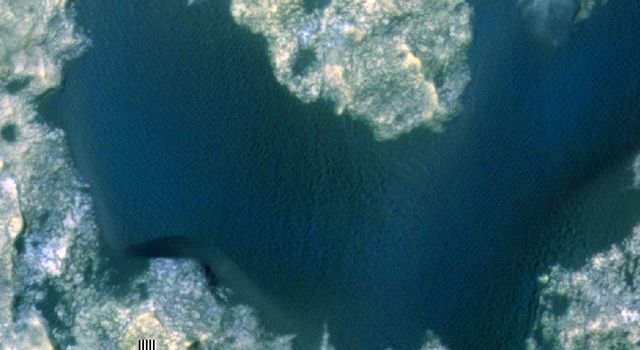 Orbital View of Dune That Curiosity Will Visit 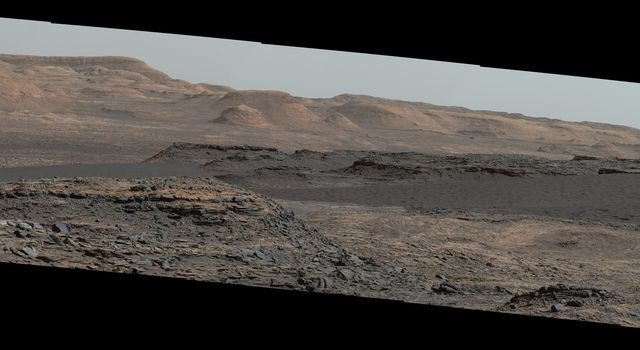 Curiosity Rover Will Study Dunes on Route up Mountain The dark band in the lower portion of this Martian scene is part of the "Bagnold Dunes" dune field lining the northwestern edge of Mount Sharp, inside Gale Crater.

The view combines multiple images taken with the Mast Camera (Mastcam) on NASA's Curiosity Mars rover on Sept. 25, 2015, during the 1,115th Martian day, or sol, of Curiosity's work on Mars. The images are from Mastcam's right-eye camera, which has a telephoto lens. The view is toward south-southeast.

Curiosity will visit examples of the Bagnold Dunes on the rover's route to higher layers of Mount Sharp. The informal name for the dune field is a tribute to British military engineer Ralph Bagnold (1896-1990), a pioneer in the study of how winds move sand particles of dunes on Earth. The dune field is evident as a dark band in orbital images of the area inside Gale Crater where Curiosity has been active since landing in 2012, such as a traverse map at PIA20162.

Dunes are larger than wind-blown ripples of sand or dust that Curiosity and other rovers have visited previously.

The scene is presented with a color adjustment that approximates white balancing, to resemble how the rocks and sand would appear under daytime lighting conditions on Earth. Figure 1 includes a scale bar of 50 meters (164 feet).