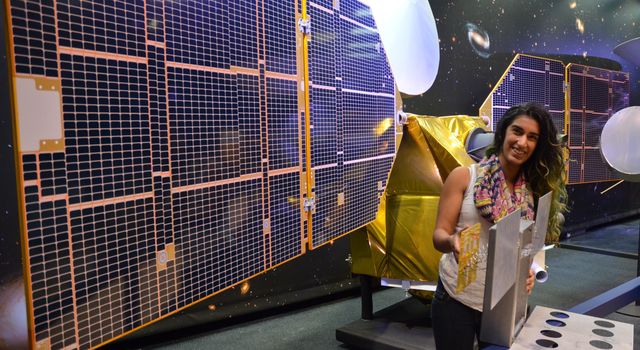 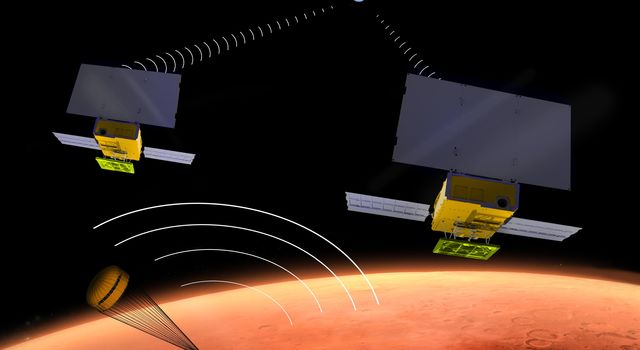 Engineers for NASA's MarCO technology demonstration display a full-scale mechanical mock-up of the small craft in development as part of NASA's next mission to Mars. Mechanical engineer Joel Steinkraus and systems engineer Farah Alibay are on the team at NASA's Jet Propulsion Laboratory, Pasadena, California, preparing twin MarCO (Mars Cube One) CubeSats for a March 2016 launch.

The briefcase-size MarCO twins will ride along on an Atlas V launch vehicle lifting off from Vandenberg Air Force Base, California, with NASA's next Mars lander, InSight.

The mock-up in the photo is in a configuration to show the deployed position of components that correspond to MarCO's two solar panels and two antennas. During launch, those components will be stowed for a total vehicle size of about 14.4 inches (36.6 centimeters) by 9.5 inches (24.3 centimeters) by 4.6 inches (11.8 centimeters).

After launch, the two MarCO CubeSats and InSight will be navigated separately to Mars. The MarCO twins will fly past the planet in September 2016 just as InSight is descending through the atmosphere and landing on the surface. MarCO is a technology demonstration mission to relay communications from InSight to Earth during InSight's descent and landing. InSight communications during that critical period will also be recorded by NASA's Mars Reconnaissance Orbiter for delayed transmission to Earth.

InSight -- an acronym for Interior Exploration using Seismic Investigations, Geodesy and Heat Transport -- will study the interior of Mars to improve understanding of the processes that formed and shaped rocky planets, including Earth.