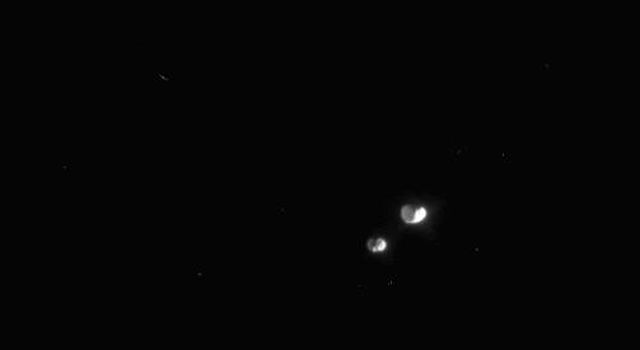 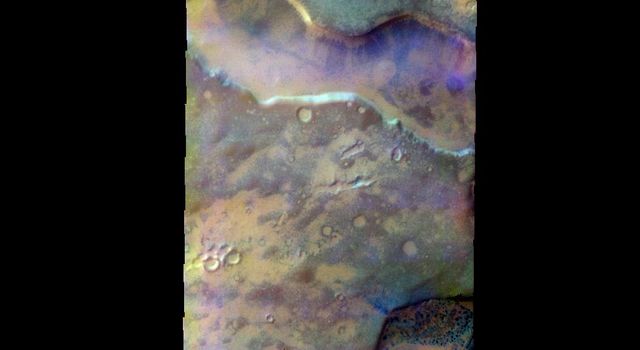 After a couple of years in high-inclination orbits that limited its ability to encounter Saturn's moons, NASA's Cassini spacecraft returned to Saturn's equatorial plane in March 2015.

As a prelude to its return to the realm of the icy satellites, the spacecraft had its first relatively close flyby of an icy moon (apart from Titan) in almost two years on Feb. 9. During this encounter Cassini's cameras captured images of the icy moon Rhea, as shown in these in two image mosaics. The views were taken about an hour and a half apart as Cassini drew closer to Rhea.

Images taken using clear, green, infrared and ultraviolet spectral filters were combined to create these enhanced color views, which offer an expanded range of the colors visible to human eyes in order to highlight subtle color differences across Rhea's surface. The moon's surface is fairly uniform in natural color.

The image at right represents one of the highest resolution color views of Rhea released to date. A larger, monochrome mosaic is available in PIA07763.

Both views are orthographic projections facing toward terrain on the trailing hemisphere of Rhea. An orthographic view is most like the view seen by a distant observer looking through a telescope. The views have been rotated so that north on Rhea is up.

The mosaics each consist of multiple narrow-angle camera (NAC) images with data from the wide-angle camera used to fill in areas where NAC data was not available.

The image was produced by Heike Rosenberg and Tilmann Denk at Freie Universität in Berlin, Germany.