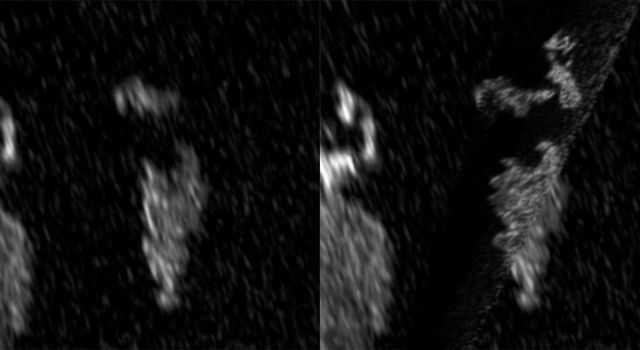 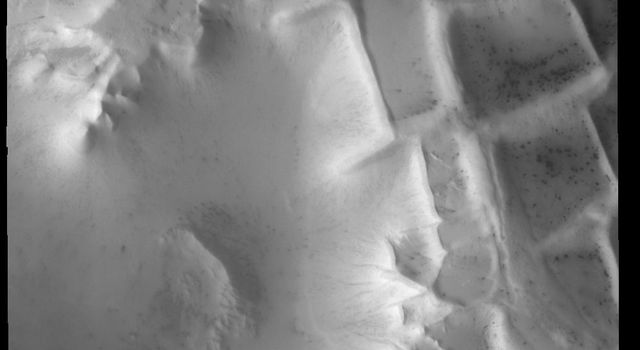 The first demonstration of the ability of NASA's MAVEN Mars to relay data from a Mars surface mission included this and several other images from NASA's Curiosity Mars rover.

MAVEN (for Mars Atmosphere and Volatile Evolution) entered orbit around Mars on Sept. 21, 2014. In addition to its science instruments, the spacecraft carries an Electra UHF radio designed for communicating with robots on the surface of Mars. Combined with the communication link between MAVEN and NASA's Deep Space Network on Earth, this enables the orbiter to relay data between Mars rovers or landers and Earth. The first test, on Nov. 6, 2014, uplinked data to Curiosity from Earth and downlinked 550 megabits of data from Curiosity to Earth.

This image was taken by Curiosity's left Navigation Camera on Oct. 23, 2014, during the 787th Martian day, or sol, of the rover's work on Mars. The foreground is part of the "Pahrump Hills" outcrop at the base of Mount Sharp. The rover's location on Sol 787 can be seen on a map at http://mars.jpl.nasa.gov/msl/multimedia/images/?ImageID=6700.

This image and other data included in the first MAVEN relay test had already been sent to Earth via Curiosity's routine relay links using NASA's Mars Reconnaissance Orbiter or Mars Odyssey, which have been orbiting Mars since 2006 and 2001, respectively.

Orbiter relay of data from Mars rovers and stationary landers provides return of much more information to Earth than would be possible using only the capability for transmitting data directly from the Mars surface to Earth. Electra radios are already in use on Mars Reconnaissance Orbiter and Curiosity. They offer special features such as the capability to autonomously adjust their data rate to suit variations in signal strength due to angles and transmission distance as the orbiter crosses the sky over the rover.

MAVEN is examining the upper atmosphere of Mars to provide an understanding about processes that led to the loss of much of the original Martian atmosphere. Data and analysis could tell planetary scientists the history of climate change on the Red Planet and provide further information on the history of planetary habitability.

Curiosity has been working in Gale Crater on Mars since August 2014, investigating ancient Martian environmental conditions, including conditions that were favorable for microbial life.

MAVEN's principal investigator is based at the University of Colorado's Laboratory for Atmospheric and Space Physics, and NASA's Goddard Space Flight Center in Greenbelt, Maryland, manages the MAVEN project. NASA's Jet Propulsion Laboratory, a division of the California Institute of Technology in Pasadena, supplied and operates MAVEN's Electra payload and provides Deep Space Network support for the mission. JPL built Curiosity and the rover's Navigation Camera for NASA's Mars Science Laboratory project and manages that project for NASA's Science Mission Directorate, Washington.

For more information about MAVEN, visit http://www.nasa.gov/maven and http://lasp.colorado.edu/home/maven/. For more about Curiosity, visit http://mars.jpl.nasa.gov/msl/.