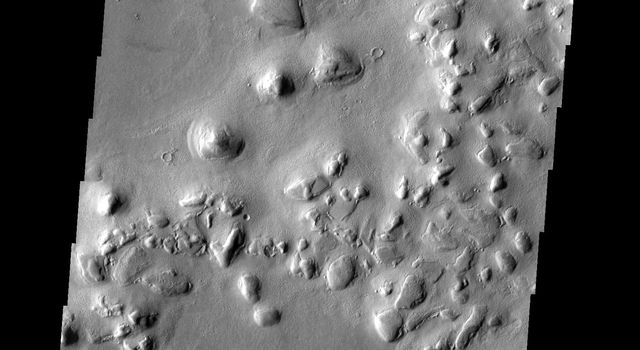 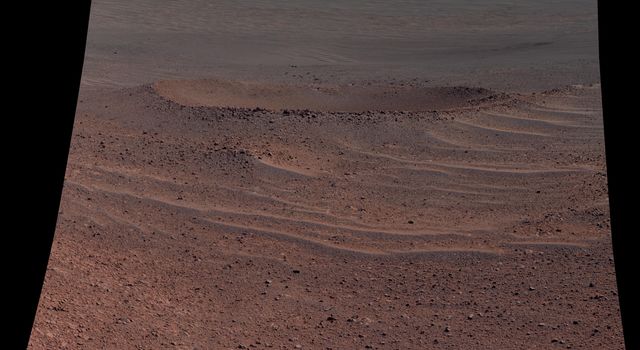 The gold line on this image shows Opportunity's route from the landing site inside Eagle Crater, in upper left, to its location after the Sol 3735 drive. The mission has been investigating on the western rim of Endeavour Crater since August 2011. This crater spans about 14 miles (22 kilometers) in diameter. The mapped area is all within the Meridiani Planum region of equatorial Mars, which was chosen as Opportunity's landing area because of earlier detection of the mineral hematite from orbit. North is up.

Opportunity now holds our solar system's distance record for off-Earth driving. The previous record holder was the Soviet Union's Lunokhod 2 rover, which landed on Earth's moon on Jan. 15, 1973, a successor to the first Lunokhod mission in 1970. Lunokhod 2 drove about 24.2 miles (39 kilometers) in less than five months (five lunar days). As Opportunity approached the 1973 mission's mileage record earlier this year, the rover team chose the name "Lunokhod 2" for a crater about 20 feet (6 meters) in diameter on the outer slope of Endeavour's rim on Mars. If Opportunity keeps working long enough to match the distance of a marathon footrace -- 26.2 miles (about 42.2 kilometers) -- it will be getting near the next major investigation site that the mission's scientists have chosen: "Marathon Valley."

The base image for the map is a mosaic of images taken by the Context Camera on NASA's Mars Reconnaissance Orbiter. An earlier version of this map, with other features labeled, is at PIA17558. Figure 1 is an unlabeled version of the map.

This traverse map was made at the New Mexico Museum of Natural History & Science, Albuquerque. NASA's Jet Propulsion Laboratory, a division of the California Institute of Technology in Pasadena, manages the Mars Exploration Rover Project and the Mars Reconnaissance Orbiter for the NASA Science Mission Directorate, Washington. Malin Space Science Systems, San Diego, built and operates the orbiter's Context Camera.