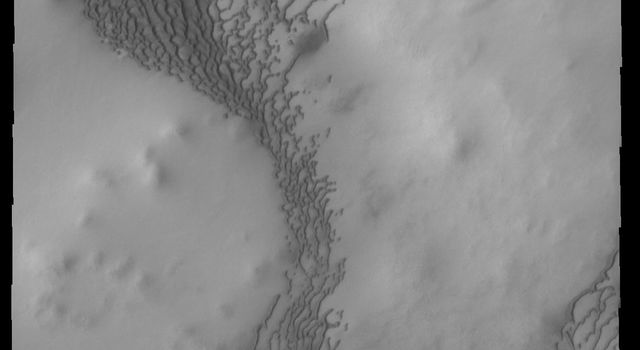 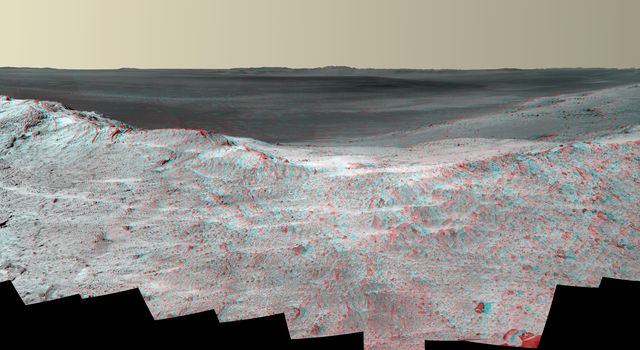 This scene from the panoramic camera (Pancam) of NASA's Mars Exploration Rover Opportunity catches "Pillinger Point," on the western rim of Endeavour Crater, in the foreground. It is presented in false color to make differences in surface materials more easily visible.

The eastern rim of the crater is on the distant horizon. Endeavour Crater is 14 miles (22 kilometers) in diameter.

The vista spans from north-northwest, at the left, to south-southwest, at the right. It combines several Pancam exposures taken on the 3,663rd Martian day, or sol, of Opportunity's work on Mars (May 14, 2014). The exposures were taken through three of the Pancam's color filters, centered on wavelengths of 753 nanometers (near-infrared), 535 nanometers (green) and 432 nanometers (violet).

Opportunity's international science team chose Pillinger Point as the informal name for this ridge as a tribute to Colin Pillinger (1943-2014). Pillinger was the British principal investigator for the Beagle 2 project, which attempted to set a lander on Mars a few weeks before Opportunity's January 2004 landing.

The site became a destination for Opportunity to examine because observations from orbit indicated the presence of a clay mineral named montmorillonite, which forms under wet conditions.

Photojournal Note: Also available is the full resolution TIFF file PIA18394_full.tif. This file may be too large to view from a browser; it can be downloaded onto your desktop by right-clicking on the previous link and viewed with image viewing software.