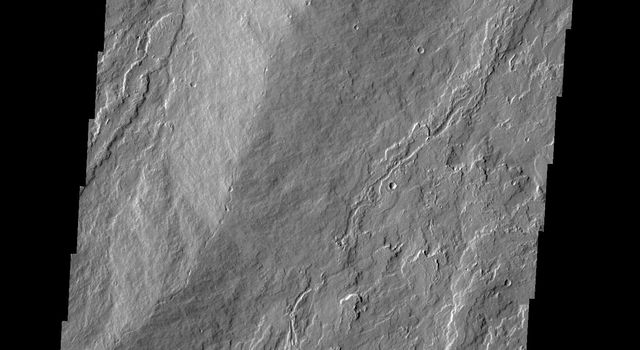 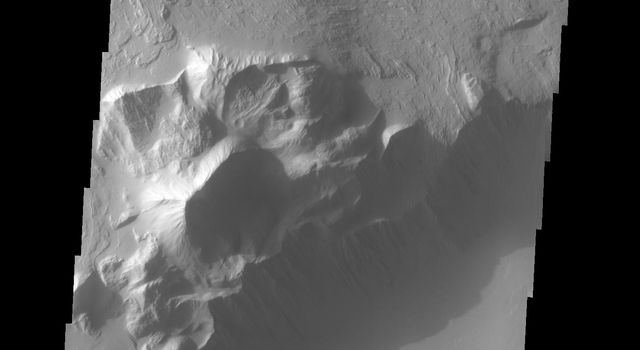 Olympus Mons Escarpment
Click on an individual image for full resolution figures image
This view combines several frames taken by the Mast Camera (Mastcam) on NASA's Mars rover Curiosity, looking into a valley to the west from the eastern side of a dune at the eastern end of the valley. The team operating Curiosity has chosen this valley as a likely route toward mid-term and long-term science destinations. The foreground dune, at a location called "Dingo Gap," is about 3 feet (1 meter) high in the middle and tapered at south and north ends onto low scarps on either side of the gap.

The component images were taken by Mastcam's left-eye camera during early afternoon, local solar time, of the 528th Martian day, or sol, of Curiosity's work on Mars (Jan. 30, 2014). The center of the view is about 10 degrees south of straight west. The left edge is about 20 degrees west of straight south. The right edge is northwest. The largest of the dark rocks on the sand in the right half of the scene are about 2 feet (about 60 centimeters) across.

The image has been white-balanced to show what the rocks would look like if they were on Earth. A version with two 2-meter (79-inch) scale bars at distances of about 36 feet (11 meters) and 131 feet (40 meters) away from the rover is available as Figure 1. A version with raw color, as recorded by the camera under Martian lighting conditions, is available as Figure 2.