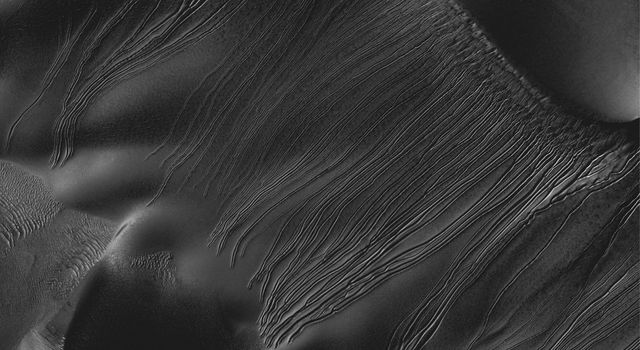 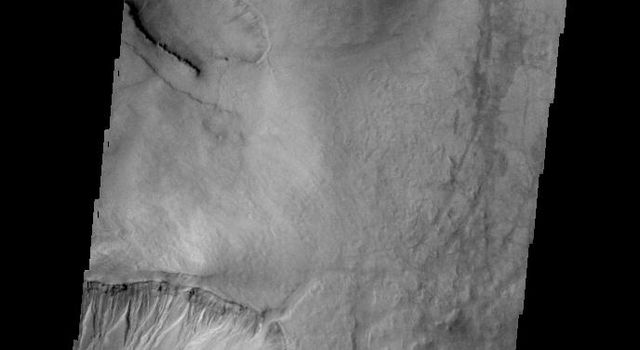 As on the Earth, many processes can move material down a Martian slope. This graphic compares seven different types of features observed on Mars that appear to result from material flowing or sliding or rolling down slopes.

Processes that explain one type of downslope feature may be irrelevant to another type. Some processes depend on the presence of a fluid, some are driven by seasonal changes in the environment, and others occur randomly when gravity is able to pull down unstable slope material.

These different processes can generate a wide range of feature shapes, though sometimes different processes can yield similar-looking results. Thus, to figure out how a feature may have formed, more must be considered than its shape. For example, researchers examining images from Mars orbiters have found differences in
1. the season when the features are formed or are active (e.g., the features called "recurring slope lineae" or RSLs appear
during late spring and summer, but linear gullies are active only during early spring);
2. the features' sizes (e.g., slope streaks can extend for miles or kilometers, but dark frost streaks on dunes extend only up to
100 yards, or meters); and
3. the types of terrain on which a feature is found (e.g., gullies with an alcove-channel-apron shape are found both on rocky
slopes and on sandy slopes, but linear gullies are only found on sandy slopes; dark frost streaks are formed on frozen dune
slopes, but RSLs are formed on dark, warm slopes).

Scientists consider all of these factors -- and more -- when trying to form a complete picture about a feature's formation history and in figuring out what the presence of that feature means about the environment.