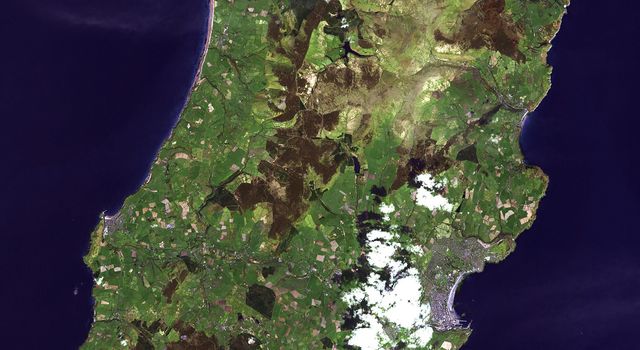 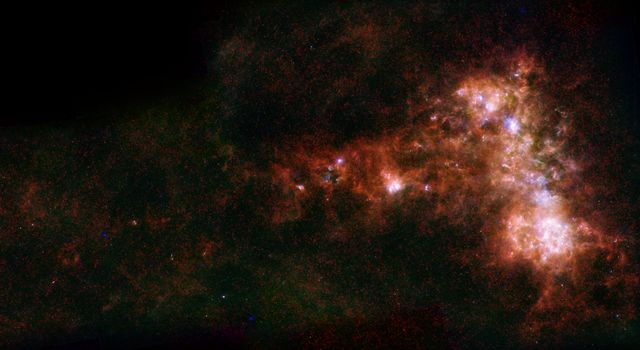 This enormous section of the Milky Way galaxy is a mosaic of images from NASA's Wide-field Infrared Survey Explorer, or WISE. The constellations Cassiopeia and Cepheus are featured in this 1,000-square degree expanse. These constellations, named after an ancient Queen and King of Ethiopia in Greek mythology, are visible in the northern sky every night of the year as seen from most of the United States.

To the unaided human eye, Cassiopeia is easily recognizable by the five bright stars that make up its "W" shape. However, WISE observed infrared light, where the sky takes on a very different appearance. The bright stars of the constellations fade into obscurity amongst the backdrop of millions of other stars revealed by WISE. Cool clouds of dust that fill the space between the stars in the Milky Way glow in infrared light and tell us more about the story of how stars are born, and how they die.

Within this image are dozens of dense clouds, called nebulae. Many of the nebulae seen here are places where new stars are forming, creating bubble like structures that can be dozens to hundreds of light-years in size. The process of star formation within these giant clouds has been likened to fireworks, celebrating the birth of new generations of stars. But the death of stars is also seen in the remnants of a supernova explosion that was witnessed by the astronomer Tycho Brahe in 1572 AD. This remnant is located about one-fifth of the way from left of center, and about one-sixth of the way up from the middle of the image.

The colors used in this image represent specific wavelengths of infrared light. Blue and cyan (blue-green) represent light emitted at wavelengths of 3.4 and 4.6 microns, which is predominantly from stars. Green and red represent light from 12 and 22 microns, respectively, which is mostly emitted by dust. This image is a mosaic of thousands of individual frames from WISE, combined first into 442 interlocking tiles before re-projecting and stitching them into the final picture. This was done for each of the four WISE wavelengths, totaling nearly 30 billion pixels in the interlocking tiles.