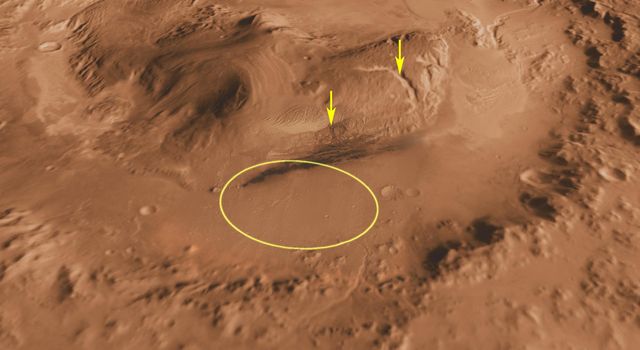 Canyons on Mountain Inside Gale Crater 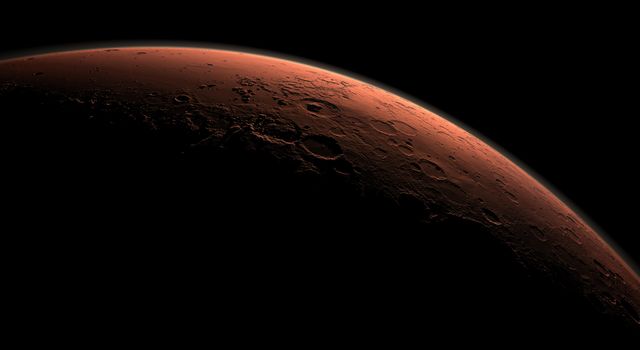 Unannotated image
Click on the image for larger view

This oblique, southward-looking view of Gale crater shows the mound of layered rocks that NASA's Mars Science Laboratory will investigate. The mission's selected landing site is just north of the mound inside the crater.

Gale crater is 96 miles (154 kilometers) in diameter and holds a layered mountain rising about 3 miles (5 kilometers) above the crater floor.

The landing site contains material washed down from the wall of the crater, which will provide scientists with the opportunity to investigate the rocks that form the bedrock in this area. The landing ellipse also contains a rock type that is very dense and very bright colored; it is unlike any rock type previously investigated on Mars. It may be an ancient playa lake deposit, and it will likely be the mission's first target in checking for the presence of organic molecules.

The area of top scientific interest for Mars Science Laboratory is at the base of the mound, just at the edge of the landing ellipse. Here, orbiting instruments have detected signatures of both clay minerals and sulfate salts. Scientists studying Mars have several important hypotheses about how these minerals reflect changes in the Martian environment, particularly changes in the amount of water on the surface of Mars. The Mars Science Laboratory rover, Curiosity, will use its full instrument suite to study these minerals and how they formed to give us insights into those ancient Martian environments. These rocks are also a prime target in checking for organic molecules.

This three-dimensional perspective view was created using visible-light imaging by the Thermal Emission Imaging System camera on NASA's Mars Odyssey orbiter. Three-dimensional information was derived from observations by the Mars Orbiter Laser Altimeter, which flew on NASA's Mars Global Surveyor orbiter. Color information is derived from color imaging of portions of the scene by the High Resolution Imaging Science Experiment camera on NASA's Mars Reconnaissance Orbiter. The vertical dimension is not exaggerated.

The Mars Science Laboratory spacecraft is being prepared for launch during the period Nov. 25 to Dec. 18, 2011. In a prime mission lasting one Martian year -- nearly two Earth years -- after landing, researchers will use the rover's tools to study whether the landing region has had environmental conditions favorable for supporting microbial life and for preserving clues about whether life existed.