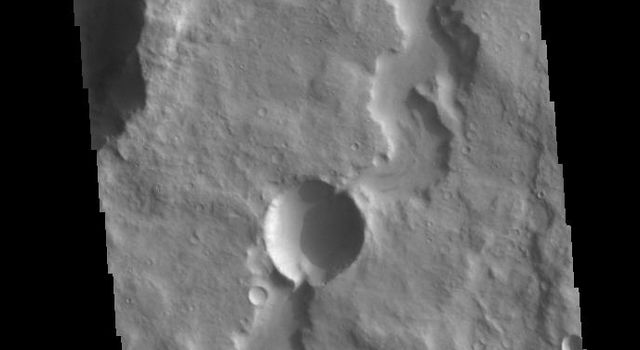 Jupiter's volcanically active moon Io casts its shadow on the planet in this dramatic image from NASA's Juno spacecraft. As with solar eclipses on the Earth, within the dark circle racing across Jupiter's cloud tops one would witness a full solar eclipse as Io passes in front of the Sun.

Such events occur frequently on Jupiter because it is a large planet with many moons. In addition, unlike most other planets in our solar system, Jupiter's axis is not highly tilted relative to its orbit, so the Sun never strays far from Jupiter's equatorial plane (+/- 3 degrees). This means Jupiter's moons regularly cast their shadows on the planet throughout its year.

Juno's close proximity to Jupiter provides an exceptional fish-eye view, showing a small fraction near the planet's equator. The shadow is about 2,200 miles (3,600 kilometers) wide, approximately the same width as Io, but appears much larger relative to Jupiter.

A little larger than Earth's Moon, Io is perhaps most famous for its many active volcanoes, often caught lofting fountains of ejecta well above its thin atmosphere.

Citizen scientist Kevin M. Gill created this enhanced-color image using data from the spacecraft's JunoCam imager. The raw image was taken on Sept. 11, 2019 at 8:41 p.m. PDT (11:41 p.m. EDT) as the Juno spacecraft performed its 22nd close flyby of Jupiter. At the time the image was taken, the spacecraft was about 4,885 miles (7,862 kilometers) from the cloud tops at a latitude of 21 degrees.