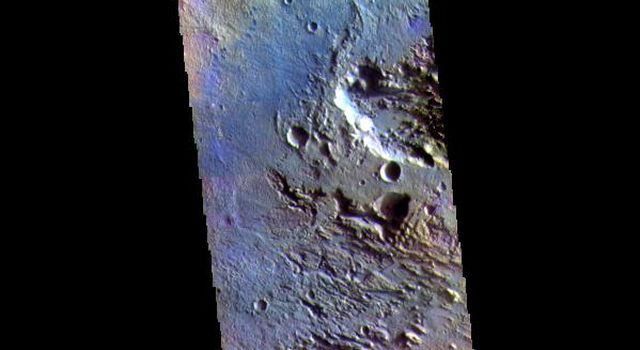 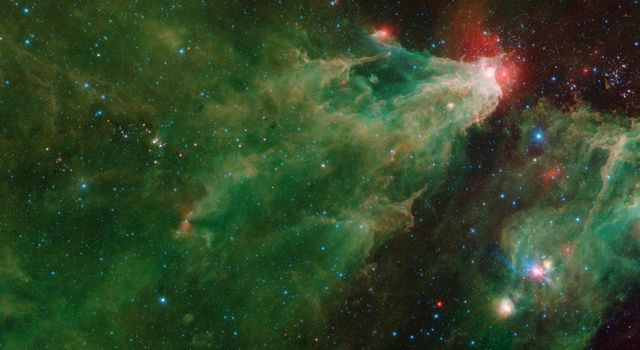 Cepheus C and Cepheus B Region by Spitzer (Two-Instrument)

This image shows data from NASA's Spitzer Space Telescope, from the IRAC instrument, with colors corresponding to wavelengths of 3.6, 4.5, 5.8 and 8.0 µm (shown as blue, green, orange and red).

The grand red delta filling most of the image is a far-away nebula, or a cloud of gas and dust. A second nebula is located in the lower right portion of the image.

Within the first nebula, on the left side of this image, a dark filament runs horizontally through the green cloud. A smattering of baby stars (the red and yellow dots) appear inside it. Known as Cepheus C, the area is a particularly dense concentration of gas and dust where infant stars form. This region is called Cepheus C because it lies in the constellation Cepheus, which can be found near the constellation Cassiopeia. Cepheus-C is about 6 light years long, and lies about 40 light-years from the bright spot at the tip of the nebula.

Two features identified in the annotated image are visible only in the multi-instrument version of the image, found here. The first is V374 Ceph in the larger nebula. The second is the "runaway star" in the smaller nebula.

A second star cluster is located just above the second large nebula on the right side of the image. Known as Cepheus B, the cluster sits within a few thousand light-years of our Sun. A study of this region using Spitzer found that the dramatic collection is about 4 million to 5 million years old Ã¢Â?Â? slightly older than those in Cepheus C.

Also found in the second nebula is a small cluster of newborn stars that illuminates the dense cloud of gas and dust where they formed. It appears as a bright teal splash.