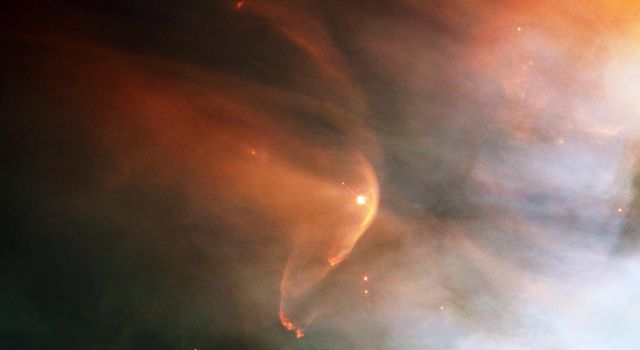 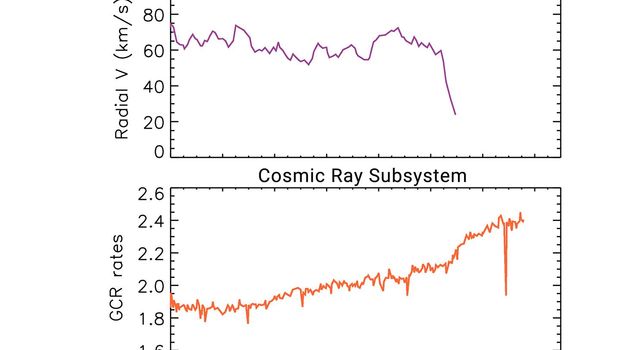 This artist's concept puts solar system distances -- and the travels of NASA's Voyager 2 spacecraft -- in perspective. The scale bar is in astronomical units, with each set distance beyond 1 AU representing 10 times the previous distance. One AU is the distance from the Sun to Earth, which is about 93 million miles, or 150 million kilometers. Neptune, the most distant planet from the Sun, is about 30 AU.

Voyager 2, the second farthest human-made object after Voyager 1, is around 119 AU from the Sun. Indications from the scientific instruments suggest Voyager 2 passed beyond our heliosphere (the bubble of plasma the Sun blows around itself) and into interstellar space (the space between stars) in November 2018. The heliosphere has a turbulent outer boundary known as the heliosheath. The termination shock is the inner boundary of the heliosheath and the heliopause is the outer boundary, beyond which lies interstellar space. Voyager 2 crossed the termination shock at 84 AU in August 2007.

It will take about 300 years for Voyager 2 to reach the inner edge of the Oort Cloud and possibly about 30,000 years to fly beyond it.

Voyager 2 is heading away from the Sun about 36 degrees out of the ecliptic plane (plane of the planets) to the south, toward the constellations of Sagittarius and Pavo. In about 40,000 years, Voyager 2 will be closer to another star than our own Sun, coming within about 1.7 light years of a star called Ross 248, a small star in the constellation of Andromeda.

The Voyager spacecraft were built by JPL, which continues to operate both. JPL is a division of Caltech in Pasadena. California. The Voyager missions are a part of the NASA Heliophysics System Observatory, sponsored by the Heliophysics Division of the Science Mission Directorate in Washington.

For more information about the Voyager spacecraft, visit https://www.nasa.gov/voyager and https://voyager.jpl.nasa.gov.