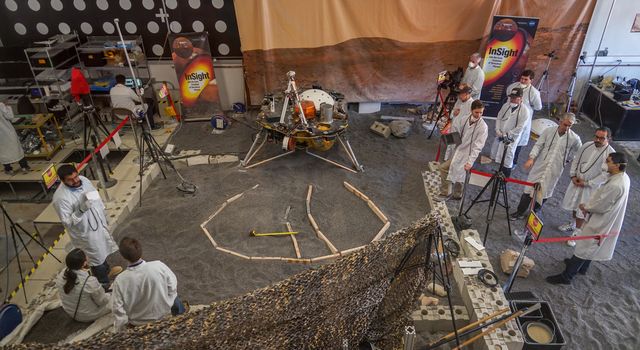 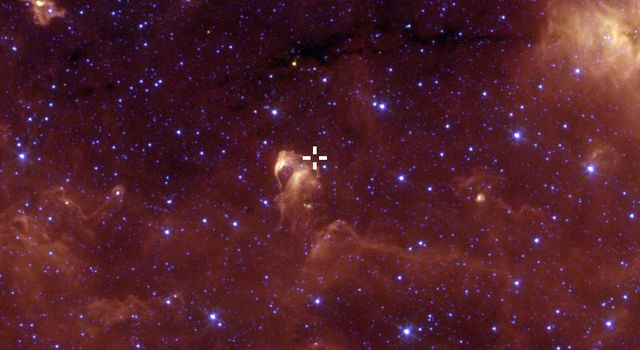 Engineers practice deploying InSight's instruments in a lab at NASA's Jet Propulsion Laboratory in Pasadena, California. Several of them are wearing sunglasses to block the bright yellow lights in the test space, which mimic sunlight as it appears on Mars.

The yellow lights are used to test cameras which are the same as those used by InSight on Mars. The entire lab space in the center of the image has been sculpted to mimic the terrain in front of the lander on Mars, creating more reliable test conditions.

The area in the center of the image is the "workspace" where the lander's instruments can be set down; wood blocks have been laid down to mark the perimeter of these areas. Rocks have been chosen to match the size, shape and location of those in front of InSight on Mars. In the center of the image is a model of the lander's copper-colored seismometer; at the bottom-right is a second model of the seismometer used for a different kind of testing.

In the lower left corner of the image is a bag of crushed garnet, which is used in this lab to simulate Martian sand.

JPL, a division of Caltech in Pasadena, California, manages InSight for NASA's Science Mission Directorate in Washington. InSight is part of NASA's Discovery Program, managed by the agency's Marshall Space Flight Center in Huntsville, Alabama. The InSight spacecraft was built and tested by Lockheed Martin Space in Denver, Colorado.