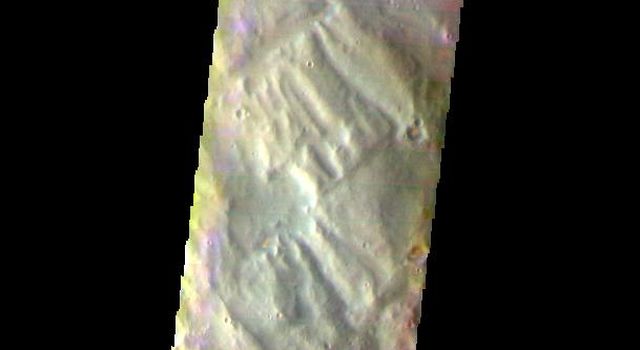 A Fan with Inverted Channels

This image was acquired on January 2, 2014 by NASA's Mars Reconnaissance Orbiter. Dune fields located among canyon wall slopes are also known as "wall dune fields" and are further identified as either climbing or falling. Falling dunes are defined as large bedforms with lee faces on the downhill side-indicating that this is the direction of their migration-and on moderate slopes greater than 10 to 12 degrees. (A lee face is the the down-wind side of a dune.)

On Earth and Mars, these types of dunes are largely controlled by what is called "microtopography." Physical obstacles can accelerate and decelerate airflow, create turbulence, potentially enhancing erosion, deposition, and/or transport of dune sediment.

This class of dune morphology is relatively rare across Mars. However, falling dunes (like these) and climbing fields are frequently located among the spur-and-gully walls in the Melas and Coprates chasmata (see the paper here). Here is one example, of active falling dunes on this large massif in east Coprates Chasma.