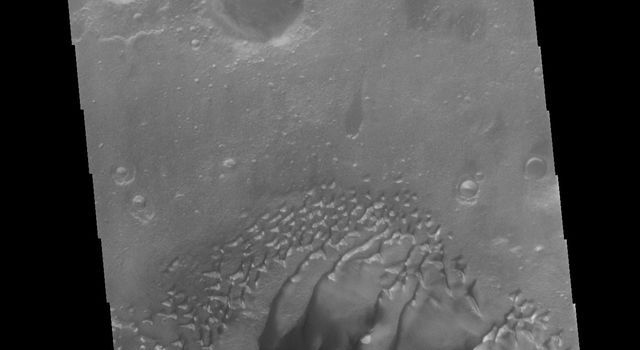 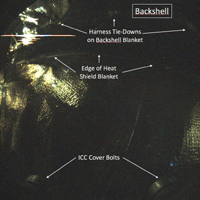 This long-exposure image (24 seconds) was taken by Instrument Context Camera (ICC) of NASA's InSight Mars lander. The image shows some of the interior features of the backshell that encapsulates the spacecraft. The backshell carries the parachute and several components used during later stages of entry, descent, and landing. Along with the heatshield, the backshell protects NASA's InSight Mars lander during its commute to and entry into the Martian atmosphere.

The annotations in this image call out discernable components in the backshell -- the heatshield blanket, harness tie-downs, and cover bolts for the ICC. The heat shield blanket provides thermal protection from the hot and cold temperature swings encountered during cruise, and the high heat that will occur during Mars atmospheric entry. The tie-downs are used to secure harnesses (or other objects) so they do not move around inside the aeroshell while in flight. The ICC cover bolts secure a protective transparent window to the camera during cruise and entry, descent and landing. The cover is opened after landing and is not visible during surface operations.

This image has been stretched to bring out details in the dimly lit scene. The illumination of the components on the inside of the backshell comes from sunlight entering around the edges of cutouts in the backshell to accommodate steering thrusters.