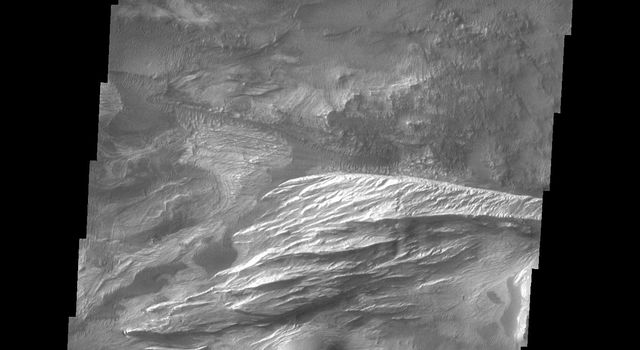 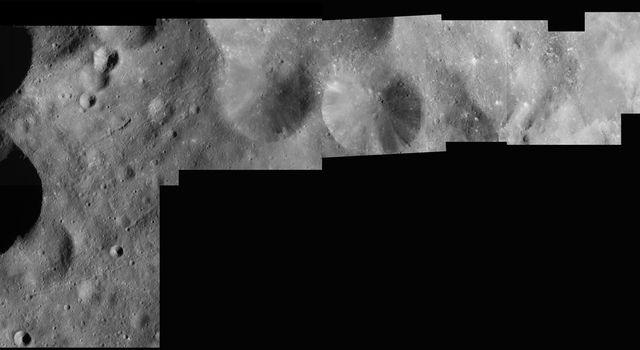 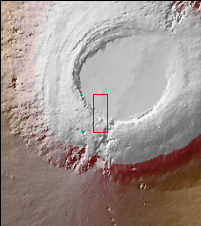 This THEMIS image shows part of the southern margin of the summit caldera. This image contains a variety of features representing the major events related to the formation of the volcano. At the top of the image a small linear vent has produced lava flows increasing the elevation of the surface around it. The flat floor of the caldera surrounds the vent and the cliff faces at the center of the image were created during the collapse event that formed the caldera. Depressions at the bottom illustrate collapse into empty voids like lava tubes.

Arsia Mons is the southernmost of the Tharsis volcanoes. It is 270 miles (450 km) in diameter, almost 12 miles (20 km) high, and the summit caldera is 72 miles (120 km) wide. For comparison, the largest volcano on Earth is Mauna Loa. From its base on the sea floor, Mauna Loa measures only 6.3 miles high and 75 miles in diameter. A large volcanic crater known as a caldera is located at the summit of all of the Tharsis volcanoes. These calderas are produced by massive volcanic explosions and collapse. The Arsia Mons summit caldera is larger than many volcanoes on Earth.