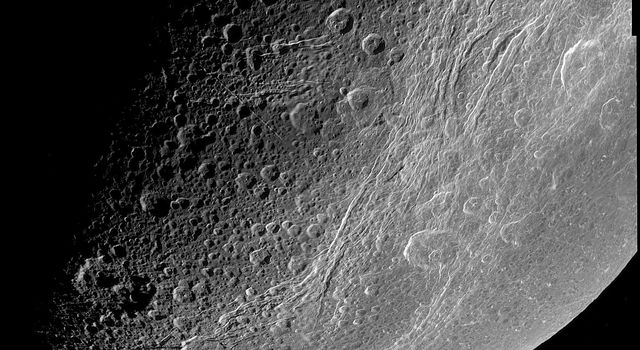 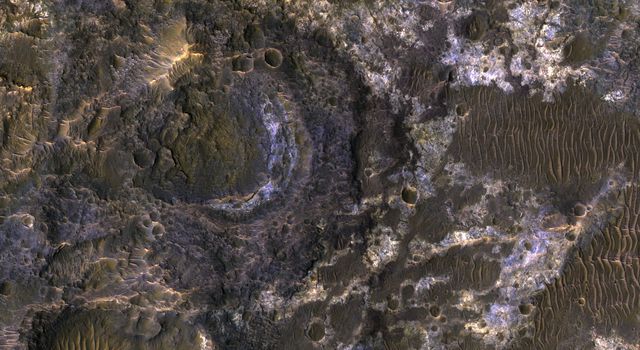 The two vertical black lines in the right half of the graph (at about 260 and 310 on the horizontal scale) mark the beginning and end of the most recent global dust storm on Mars, which burst from regional scale to globe-encircling scale in July 2007. The presence of more colored dots, particularly green ones, in the upper portion of the graph between those lines, compared to the upper portion of the graph outside those lines, documents the uplift of water vapor in connection with the global dust storm.

The color bar below the graph gives the key to how much water vapor each dot represents, in parts per million, by volume, in Mars' atmosphere. Note that green to yellow represents about 100 times as much water as purple does.

The horizontal axis of the graph is time, from January 2006 to February 2008. It is labeled with numbers representing the 360 degrees of Mars' orbit around the Sun, from zero to 360 degrees and then further on to include the first 30 degrees of the following Martian year. (The zero point is autumnal equinox -- end of summer -- in Mars' northern hemisphere.)

This graph, based on Mars Reconnaissance Orbiter observations, was used in a January 2018 paper in Nature Astronomy by Nicholas Heavens of Hampton University in Hampton, Virginia, and co-authors. The paper presents Martian dust storms' uplifting effect on water vapor as a factor in seasonal patterns that other spacecraft have detected in the rate of hydrogen escaping from the top of Mars' atmosphere.