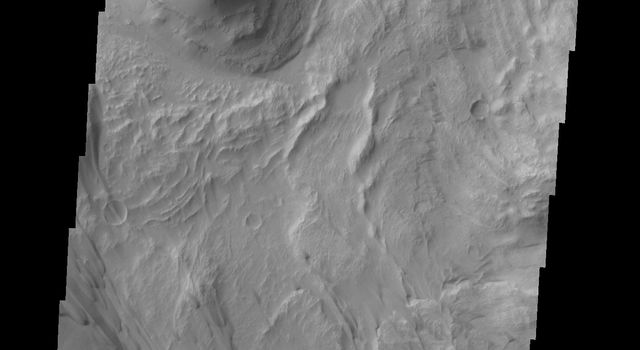 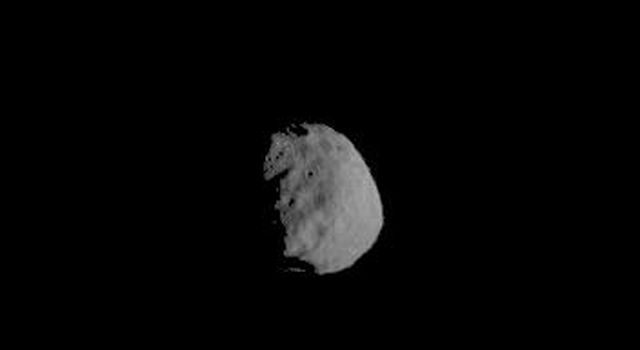 This image combines two products from the first pointing at the Martian moon Phobos by the Thermal Emission Imaging System (THEMIS) camera on NASA's Mars Odyssey orbiter, on Sept. 29, 2017. Surface-temperature information from observation in thermal-infrared wavelengths is overlaid on a more detailed image from a visible-light observation.

The left edge of the small moon was in darkness, and the right edge in morning sunlight. Phobos has an oblong shape with average diameter of about 14 miles (22 kilometers). The distance to Phobos from Odyssey during the observation was about 3,424 miles (5,511 kilometers).

Researchers will analyze the surface-temperature information from this observation and possible future THEMIS observations to learn how quickly the surface warms after sunup or cools after sundown. That could provide information about surface materials, because larger rocks heat or cool more slowly than smaller particles do. The thermal information in this image is from merging observations made in four thermal-infrared wavelength bands, centered from 11.04 microns to 14.88 microns.

Researchers have been using THEMIS to examine Mars since early 2002, but the maneuver turning the orbiter around to point the camera at Phobos was developed only recently. Odyssey orbits Mars at an altitude of about 250 miles (400 kilometers), much closer to the planet than to Phobos, which orbits about 3,700 miles (6,000 kilometers) above the surface of Mars.